The meme stock rally has taken off in recent weeks. Shares of END_OF_DOCUMENT_TOKEN_TO_BE_REPLACED

Market Outlook: Is This The Start Of A Much Bigger Decline?

With the stock market falling on trade war fears, the pullback/correction that many traders have waited for has finally arrived. Considering that this pullback is so close to the October 2018 high, many traders are wondering “is this the start of a much bigger decline, like Q4 2018?”

We focus on the long term and the medium term.

The stock market and the economy move in the same direction in the long run, which is why we pay attention to macro.

U.S. macro is decent right now, which suggests that:

This stands in contrast with Q4 2018, when macro was deteriorating from August – December 2018.

However, the U.S. economy is also in the vicinity of “as good as it gets”. This means that while the stock market can keep going up for another year, the long term risk on the downside is much greater than the long term reward on the upside.

Let’s recap some of the leading macro indicators we covered:

*All economic data charts from FRED

Housing Is A Slight Negative Factor, But Could Improve

Housing – a key leading sector for the economy – remains weak. Housing Starts and Building Permits are trending downwards while New Home Sales is trending sideways. In the past, these 3 indicators trended downwards before recessions and bear markets began.

You can see that the deterioration right now in housing is not as severe as it was before historical recessions. Hence why this is a slight negative factor for macro.

The labor market is still a positive factor for macro. Initial Claims and Continued Claims are still trending sideways. In the past, these 2 leading indicators trended higher before bear markets and recessions began.

While this may seem ominous (especially considering all the media hype around the yield curve), it’s important to remember that the yield curve tends to invert before recessions start.

*For reference, here’s the random probability of the U.S. stock market going up on any given day, week, or month.

The stock market’s medium term (next 6-12 months) leans bullish. There is a theme that’s common among most of these market studies: the first pullback/correction after a very strong rally is usually not the start of a major bear market. Bull markets peak on weakened rallies that are more volatile.

Still In A Short Term Uptrend

By one measure, the NASDAQ still remains in a prolonged short term uptrend.

Both the S&P and NASDAQ remain above their 50 day moving average this week, a prolonged streak that could soon end.

Here’s what happens next to the NASDAQ when it is above its 50 dma for 81 consecutive days. 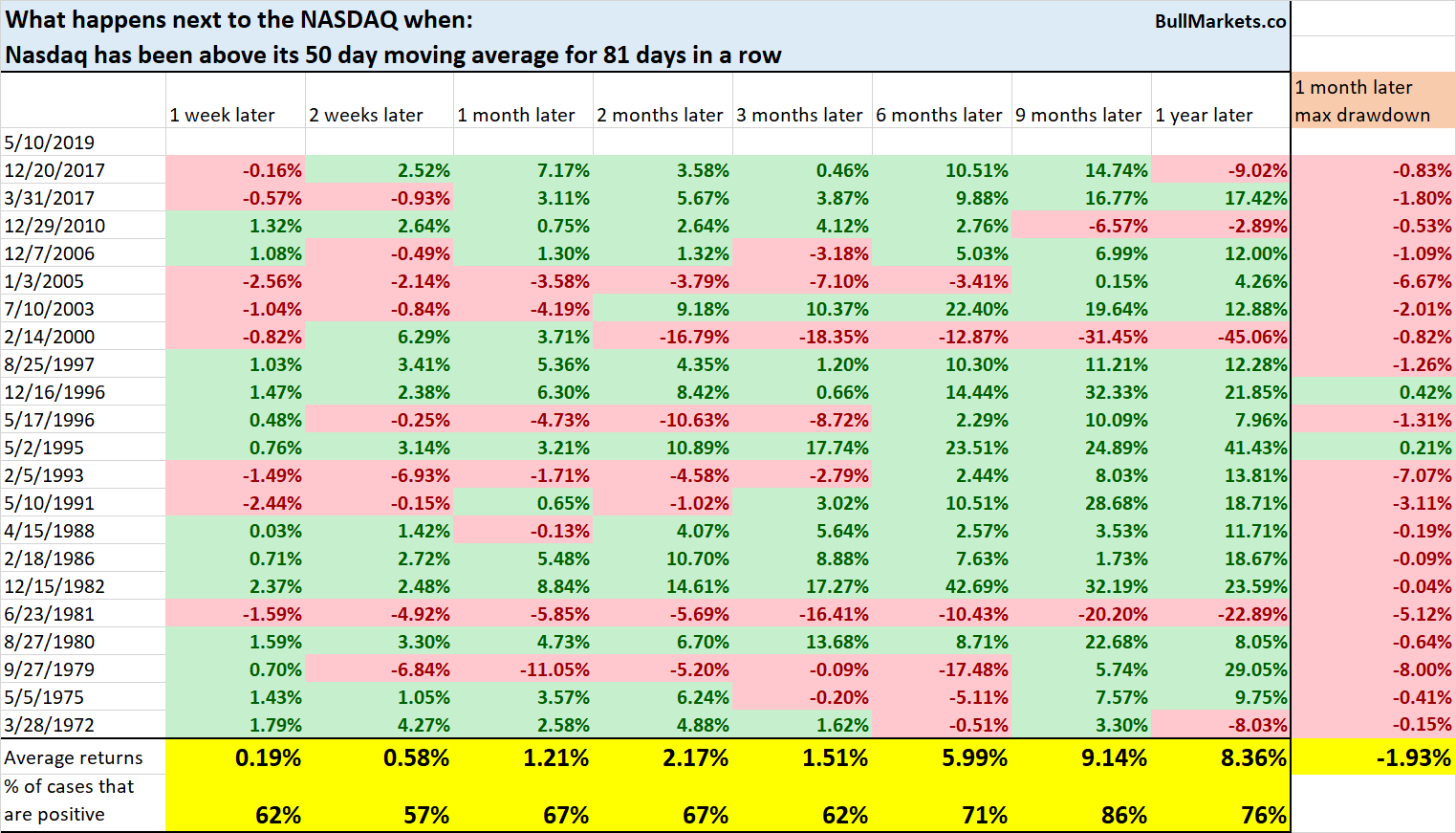 Here’s what happens next to the S&P when the NASDAQ is above its 50 dma for 81 consecutive days. 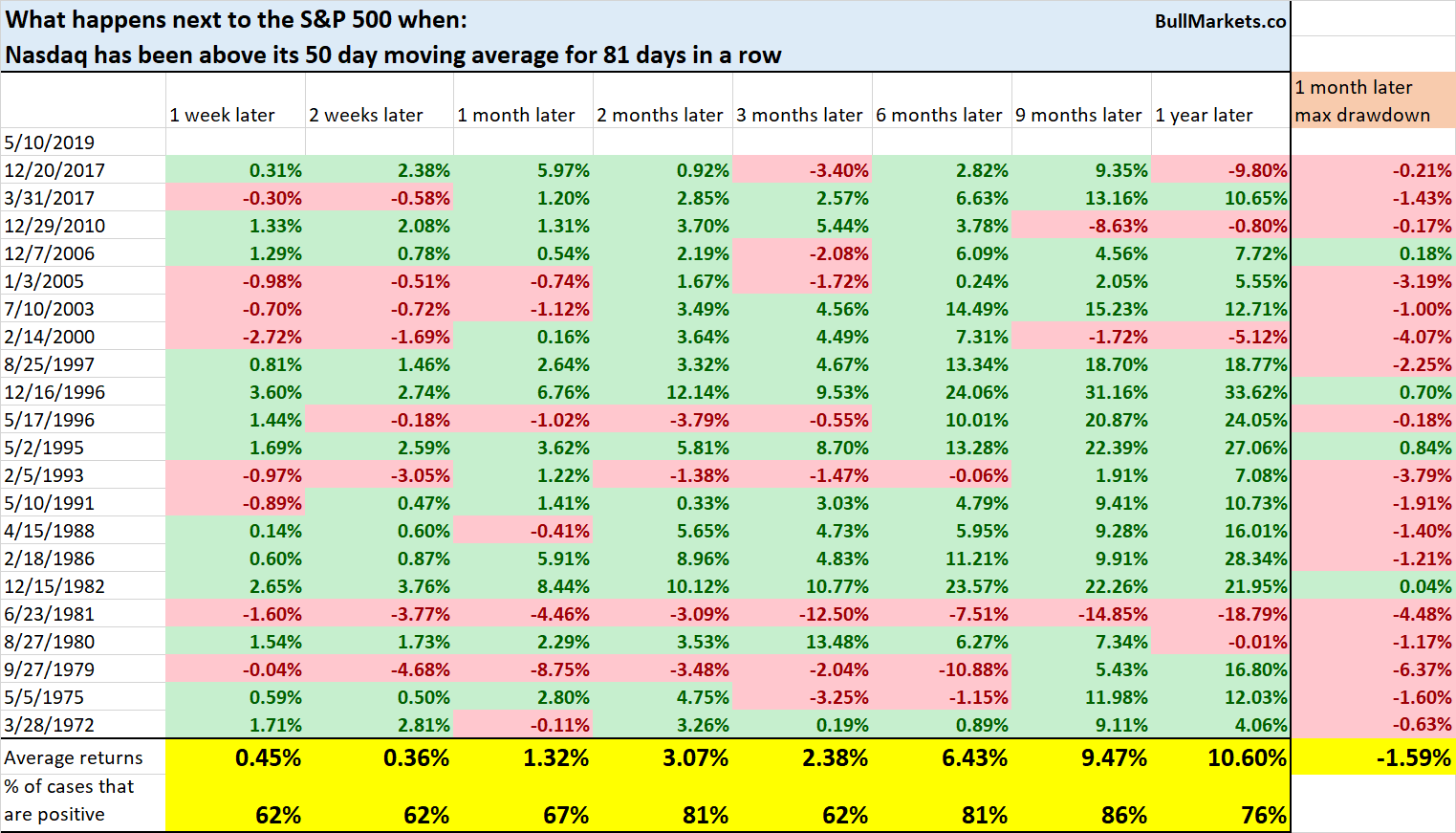 Considering that the S&P today is exactly where it was at the January 2018 high, many traders are thinking “is this just a big flat top?”

“Flat tops” are usually bull market continuation patterns, like the most recent case in this market study.

But what about the S&P’s bull trap? Is it normal for the S&P to make a new all-time high, and then promptly pullback?

Various breadth indicators are starting to weaken as the stock market falls. For example, the NYSE McClellan Summation Index has fallen below 730 for the first time in 2 months.

Here’s what happens next to the S&P when the NYSE McClellan Summation Index falls below 730 for the first time in 2 months.

While the NASDAQ has rallied over the past 3 months, the % of NASDAQ stocks above their 50 dma has been trending downwards. 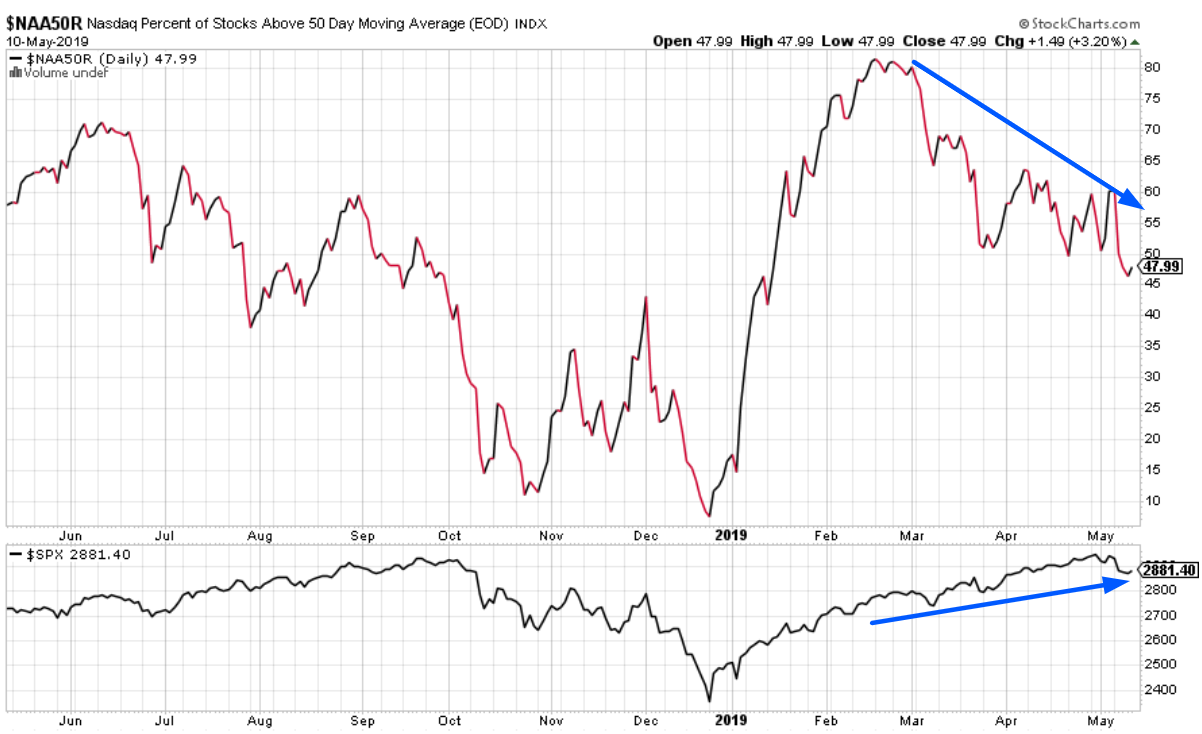 Is this a bearish breadth divergence?

This is rare, but not consistently bearish. Why not? 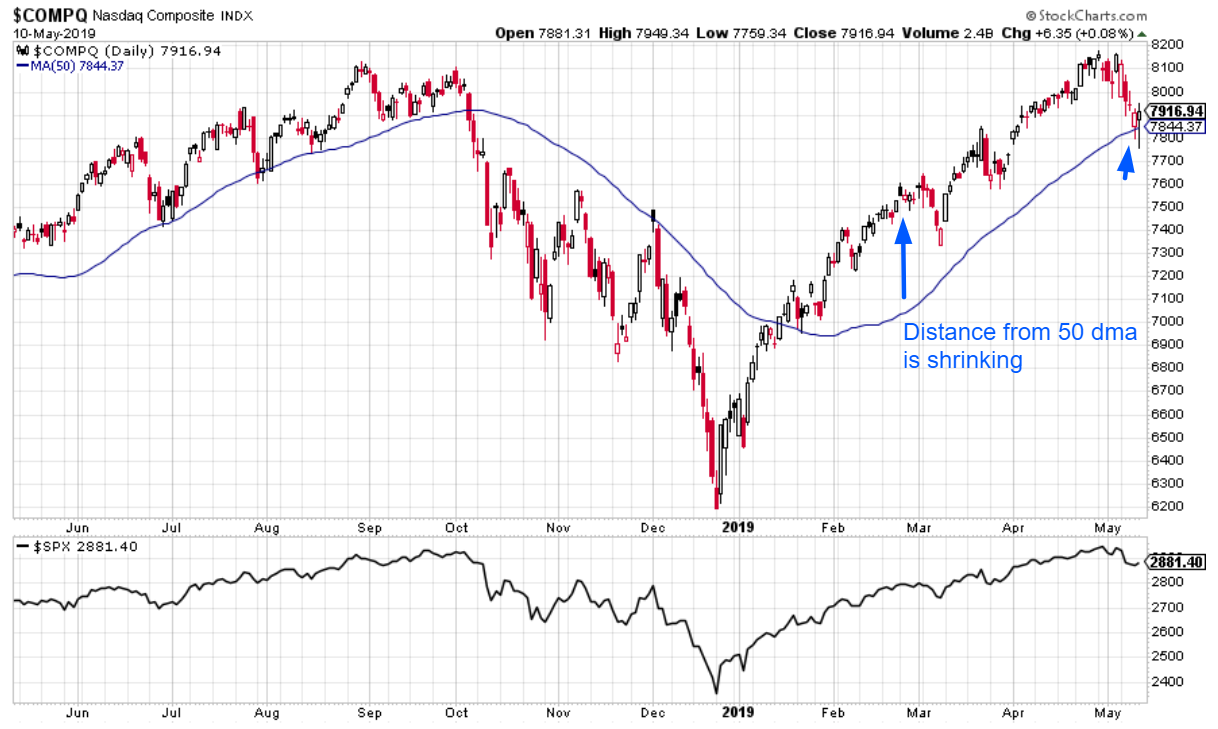 This is a normal feature of strong medium term rallies like the one we’ve seen from January-April.

The same thing applies to the S&P’s “deteriorating breadth”. 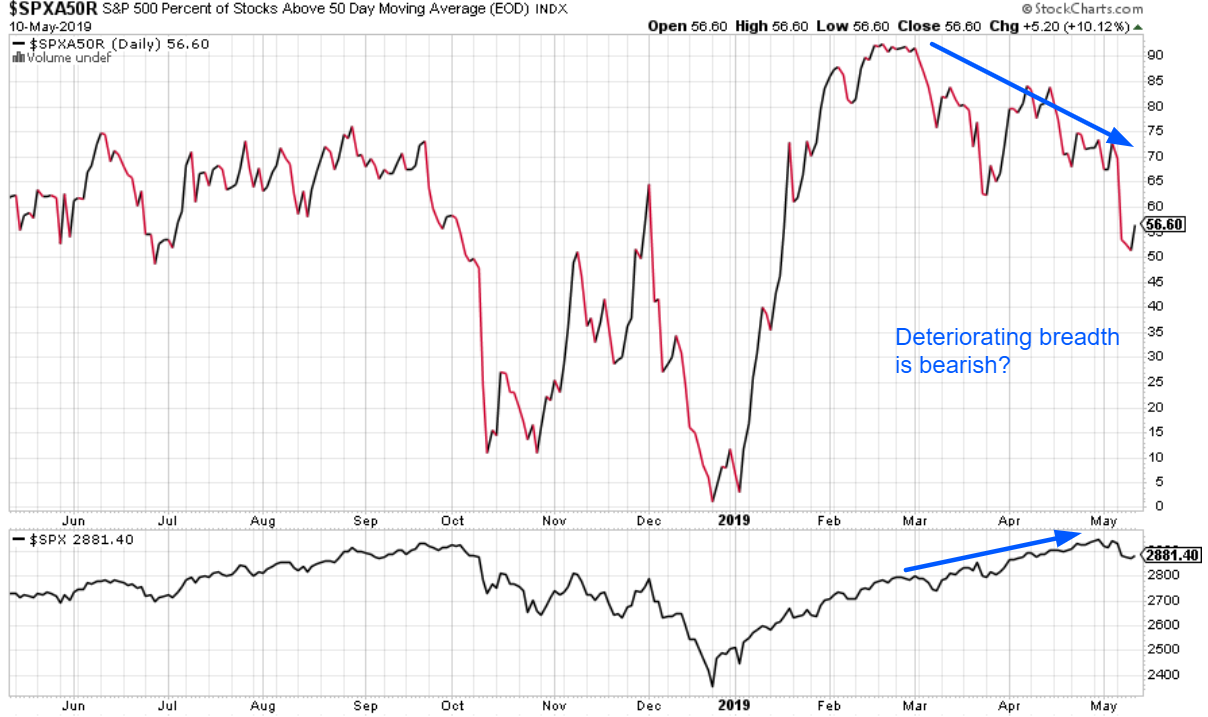 AAII Neutral % is finally starting to fall after remaining high throughout this entire rally. 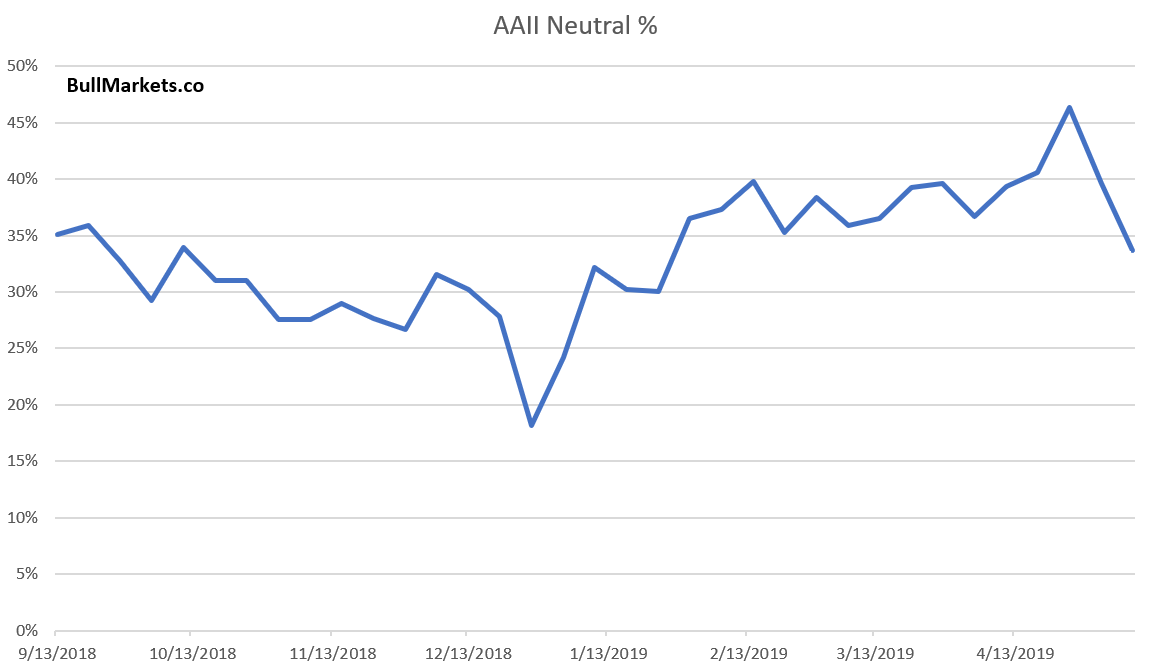 Here’s what happens next to the S&P when AAII Neutral falls below 35% for the first time in 2 months.

*The stock market’s short term is always extremely hard to predict. This is because too many random and unpredictable factors impact the short term (e.g. trade war news), no matter how much conviction you have. It is impossible to consistently and accurately predict all of these factors.

After a long streak of strong momentum, momentum is weakening. The S&P’s 14 daily RSI fell below 45 on Thursday for the first time in 4 months. 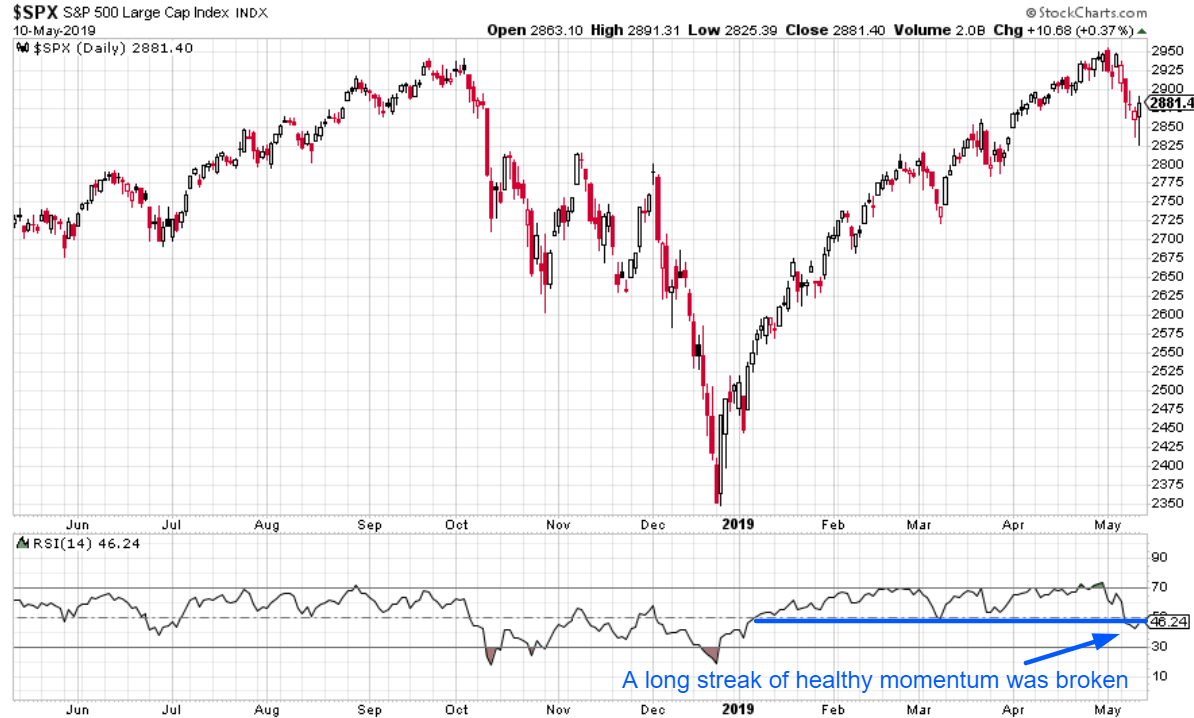 Historically, this was mostly bullish for the S&P over the next 1 month.

The Equity Put/Call ratio spiked on Friday to its highest level since December.

Historically, the forward returns were mostly random up to 2 months later. You can see a clear dichotomy in the 1 month forward max drawdowns:

The S&P’s 20 day moving average fell on Wednesday for the first time in more than 3 months.

That’s the end of a very steady short term uptrend. (The 20 dma can be used to measure short term trends).

Historically, this was mostly bullish for the S&P over the next 1 month and 3 months. 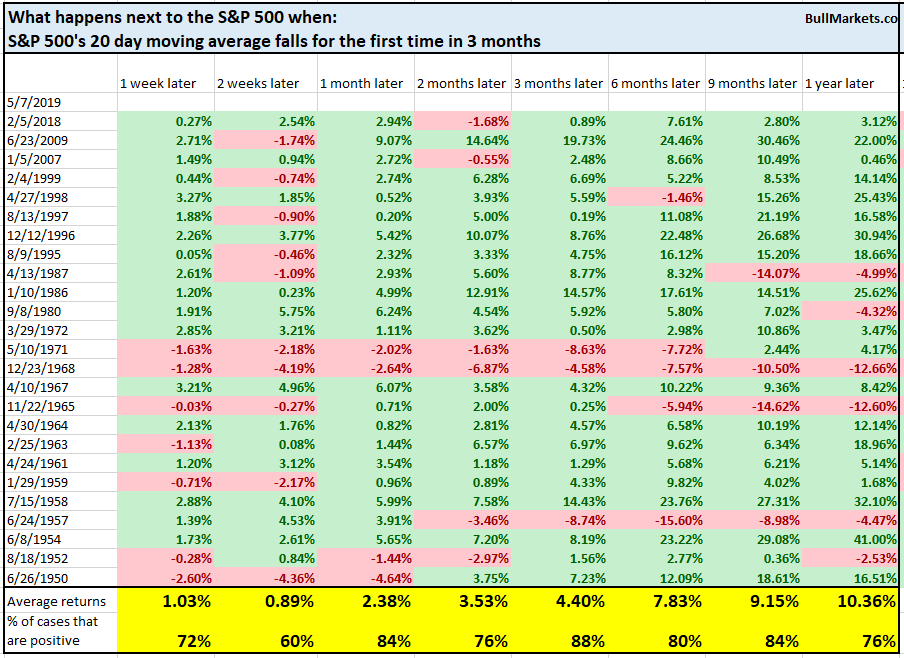 Here is our discretionary market outlook: