‘Hi-ho, hi-ho’ it’s off to work Wall Street’s bulls go. But for Slack (NYSE:WORK) and following an earnings disappointment, investors have their work cut out for them. Let’s look at what’s happening with Slack stock, as well as one well-aligned, risk-adjusted strategy to position more smartly.

It was a good past week for business, at least as far as bearish investors were concerned. The leading tech-heavy Nasdaq Composite, which has kept businesses healthier and more productive in today’s socially-distanced reality, tanked roughly 4%. And that was far from the worst of it.

Apple (NASDAQ:AAPL), the world’s largest company, nearly doubled the index’s losses and backtracked roughly 7.5%. Amazon (NASDAQ:AMZN) saw 5.4% trimmed from its trillion-dollar plus valuation. EV giant and ever influential Tesla (NASDAQ:TSLA) crashed almost 11%. And WORK fared even worse with its decline of about 12%.

Larger losses in growth stocks during corrective periods should be expected. Regardless of excuses ranging from seasonality, harder to defend valuations or escalating trade war fears, stocks that have gone up on overconfident expectations are generally more vulnerable to fiercer declines as sentiment bearishly swings the other way. But don’t make the mistake of lumping Slack stock’s relative weakness into that group.

In a nutshell, Slack topped earnings and sales views and boasted solid mid double-digit growth on more than a few metrics. Sounds good, right? It was, but one item, weaker-than-expected and declining calculated billings, appears to have drawn the ire of shareholders. 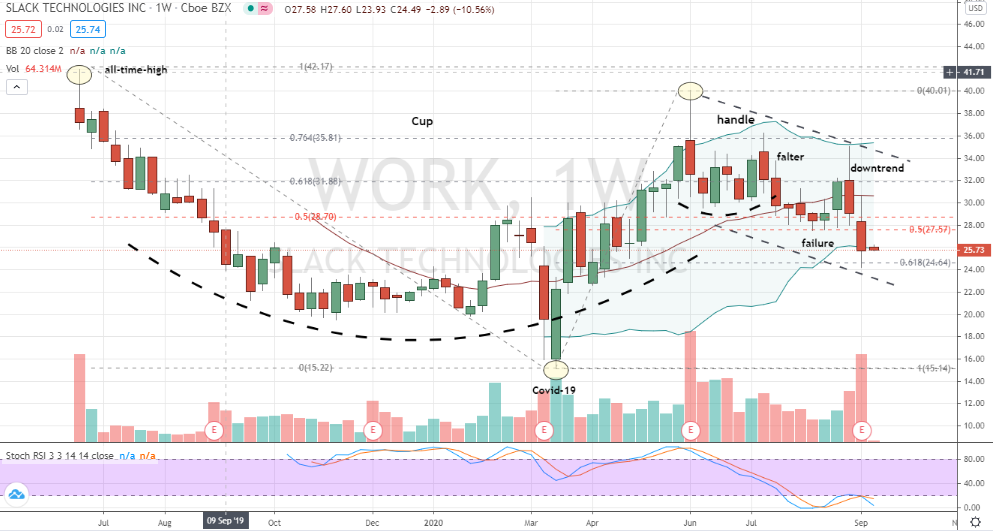 Another source of concern facing WORK stock investors is the Slack price chart.

Into early July shares had been working on a technically constructive handle consolidation. Stationed in the right side of a well-shaped cup base, the smaller price contraction was supported by the 50% – 62% retracement levels. The bullish pattern should have resulted in a breakout. That’s particularly true given the Nasdaq’s own strength and record-setting run which continued through August. It didn’t work out that way though.

WORK shares instead faltered, then failed the pattern altogether by late July. A lower-high followed by a fresh post-earnings lower-low have now established a bearish downtrend channel. Along with stochastics showing no signs of countering the weak price action, shares breaking beneath the cup’s 50% level and midfield line associated with Slack’s March Covid-19 bottom, bullish investors have their work cut out for them. And it could get a lot worse before a meaningful bottom might surface.

For the time being, waiting on weekly confirmation of a bottoming candlestick supported by a stronger stochastics setup makes sense. And to ensure an ongoing trading business, if a decision to buy WORK is eventually made, I’d strongly recommend a married put or collar strategy to hedge always possible, larger but avoidable stock risk.