Kinder Morgan: The Dividend Is Not Safe But The Stock Is A Great Bargain Near Its Historic Lows

The Effect Of Coronavirus

The primary reason behind the recent plunge of Kinder Morgan is the outbreak of coronavirus, which has forced numerous businesses to shut down and millions of people to stay at home. This lockdown will certainly take its toll on the demand for natural gas. The consumers who stay at home for the whole day will consume more natural gas but this effect will not be sufficient to compensate for the steep decrease in the industrial and corporate demand. This has led the price of natural gas to collapse to a multi-year low of $1.65.

Unfortunately, this is not the case. The minimum amounts specified by the contracts will be lower than the actual amounts realized last year. In addition, due to the collapse of the price of natural gas, some producers are likely to face financial problems. Overall, while Kinder Morgan has a much less vulnerable business model than the pure upstream producers, it will still be hurt by the impact of coronavirus on the demand for natural gas.

The other reason behind the collapse of the stock price of Kinder Morgan is its leveraged balance sheet. In early 2016, due to the previous downturn of the energy sector and its excessive debt load, Kinder Morgan was forced to cut its dividend by 75%. That was a major inflection point for the company, which began to improve its balance sheet immediately after the dividend cut. Since then, Kinder Morgan has reduced its net debt (as per Buffett, net debt = total liabilities - cash - receivables) from $47.1 billion in 2014 to $36.7 billion now. This is certainly a significant improvement.

However, Kinder Morgan still has a long way to go to claim that it has a strong balance sheet. To be sure, its current liabilities (due this year) exceed its current assets by a wide margin ($5.1 billion vs. $3.2 billion). In addition, its interest expense consumes 47% of its operating income and its net debt of $36.7 billion is 17 times the earnings of the company in 2019. As the earnings of this year will probably end up much lower than those in 2019, it is evident that the debt load of the company remains high.

It is also important to note that the demand for corporate bonds has collapsed since the onset of the ongoing sell-off of the broad market. As a result, leveraged companies may face financial problems if the ongoing crisis lasts long enough.

However, it is reasonable to expect the situation to improve the latest in a year from now. Many pharmaceutical giants are doing their best to identify an effective treatment for coronavirus. Gilead Sciences (GILD) has exhibited the most promising results so far and thus it has won an Orphan Drug status for its drug remdesivir. Moreover, many pharmaceutical giants are working on developing a vaccine for the virus. A vaccine is expected in about 12-18 months. As soon as an effective vaccine comes to circulation, financial markets will certainly begin to look beyond coronavirus. In fact, as financial markets are always forward-looking, they are likely to look beyond coronavirus much earlier than the situation improves.

Overall, it is unreasonable to expect coronavirus to condemn humanity to a permanent recession, with most people staying at home. As the recently born bear market has been the steepest in history (it took only 3 weeks from the peak of the bull market to the onset of the bear market), it is likely that most of the damage in stocks has already been done, with limited downside ahead.

As soon as the coronavirus crisis subsides, Kinder Morgan has exciting growth prospects ahead. Natural gas is much cleaner than oil and refined products and hence environmental policies do not target a decrease in the consumption of natural gas.

According to a recent study, U.S. shale oil and gas production is likely to keep growing for at least another decade. Kinder Morgan expects 33% growth in U.S. oil and gas production over the next five years. As the network of Kinder Morgan is connected to every important domestic natural gas resource area and transports 40% of total natural gas consumed in the U.S., it is evident that the company will greatly benefit from the secular growth of natural gas.

All the shareholders of Kinder Morgan were greatly disappointed in 2016, when the company slashed its dividend by 75%. However, the company raised its dividend by 25% last year and has announced another 25% raise this year. As a result, the stock is now offering a 4-year high forward dividend yield of 11.4% (=1.25/11). 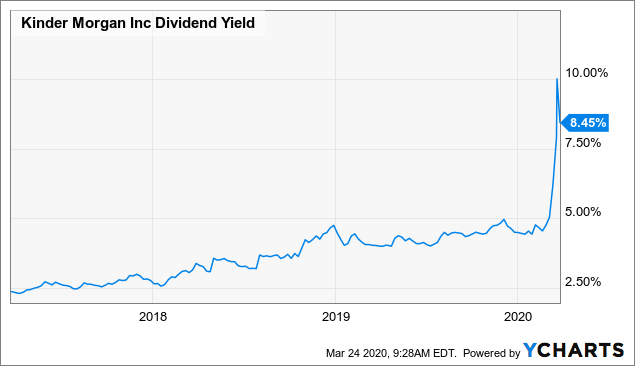 Before the coronavirus outbreak, Kinder Morgan had provided guidance for distributable cash flows per share of $2.24 for this year. It thus implied a dividend payout ratio of 56% (=1.25/2.24), which is undoubtedly healthy and provides a significant margin of safety.

However, the ongoing downturn will certainly affect the cash flows of Kinder Morgan. As the situation changes at a breathtaking pace, it is impossible to make any forecast with decent precision. However, if the downturn lasts for more than a year, Kinder Morgan will probably be forced to cut its dividend due to its high interest expense and current liabilities.

On the other hand, as mentioned above, it is unreasonable to expect coronavirus to force most people get locked at home for more than a few months. It is also reasonable to expect the virus to attenuate during the summer season but the key to a recovery will probably be the drug for its treatment and a vaccine for its prevention. It is also worth noting that the outbreak in China has already peaked and the situation in the country seems to be improving. This is certainly encouraging. If the coronavirus crisis lasts only for a few more months, Kinder Morgan is likely to be able to defend its dividend. In such a case, investors who purchase the stock now will lock in an exceptional 11.4% dividend yield, which will be secure when the economy returns to normal mode.

Richard Kinder, the Executive Chairman of Kinder Morgan, purchased shares of the company worth $6.2 million on February 26, at a stock price of $20.72. This purchase reflects the confidence of the Chairman in the future prospects of the company. Even better, he found the stock attractive at a price that was nearly twice as much as the current stock price. This certainly bodes well for the attractiveness of the stock at the current price.

On the other hand, investors should not take their investing decisions based on the purchases and sales of insiders. It is worth monitoring remarkable investing moves, such as the above, but investors should also perform their own due diligence. Nevertheless, as already mentioned, Kinder Morgan is likely to highly reward those who have the courage to buy it near its all-time lows as soon as the market begins to look beyond coronavirus.

The stock price of Kinder Morgan has collapsed due to the indiscriminate sell-off of the entire energy sector, which has been caused by coronavirus. However, as soon as the situation improves and the market begins to look beyond this disaster, Kinder Morgan will greatly reward investors off its nearly all-time low. Those who have the courage to invest in solid companies when there is blood in the streets are always highly rewarded for their contrarian view.