John Mauldin: "One Of These 3 Black Swans Will Trigger A Global Recession"

Authored by John Mauldin via MauldinEconomics.com,

Exactly 10 years ago, we were months way from a world-shaking financial crisis.

By late 2006, we had an inverted yield curve steep to be a high-probability indicator of recession. I estimated at that time that the losses would be $400 billion at a minimum. Yet, most of my readers and fellow analysts told me I was way too bearish.

Turned out the losses topped well over $2 trillion and triggered the financial crisis and Great Recession.

Conditions in the financial markets needed only a spark from the subprime crisis to start a firestorm all over the world. Plenty of things were waiting to go wrong, and it seemed like they all did at the same time.

We don’t have an inverted yield curve now. But when the central bank artificially holds down short-term rates, it is difficult if not almost impossible for the yield curve to invert.

We have effectively suppressed the biggest warning signal.

Below are three scenarios that may turn out be fateful black swans. But remember this: A harmless white swan can look black in the right lighting conditions. Sometimes, that’s all it takes to start a panic.

It is clear that the US economy is not taking off like the rocket some predicted after the election:

Is this, by any stretch of the imagination, the kind of economy in which the Federal Reserve should be tightening monetary policy? No—yet the Fed is doing so.

It’s in part because they waited too long to end QE and to begin reducing their balance sheet. FOMC members know they are behind the curve, and they want to pay lip service to doing something before their terms end.

Plus, Janet Yellen, Stanley Fischer, and the other FOMC members are religiously devoted to the Phillips curve.

The black-swan risk here is that the Fed will tighten too much, too soon.

We know from recent FOMC minutes that some members have turned hawkish in part because they wanted to offset expected fiscal stimulus from the incoming administration. That stimulus has not been coming, but the FOMC is still acting as if it will be.

What happens when the Fed raises interest rates in the early, uncertain stages of a recession instead of lowering them? Logic suggests the Fed will curb any inflation pressure that exists and push the economy into outright deflation.

Deflation in an economy as debt-burdened as ours is could be catastrophic.

Let me make an uncomfortable prediction: I think the Trump Fed—and since Trump will appoint at least six members of the FOMC in the coming year, it will be his Fed—will take us back down the path of massive quantitative easing and perhaps even to negative rates if we enter a recession.

The urge to “do something,” or at least be seen as trying to do something, is just going to be too strong.

Relative to the size of the Eurozone economy, Draghi’s stimulus has been far more aggressive then the Fed’s QE. It has pushed both deeper, with negative interest rates, and wider, by including corporate bonds.

Such interventions rarely end well, but this one is faring better than most.

Europe’s economy is recovering, at least on the surface, as the various populist movements and bank crises fade from view. But are these threats gone or just glossed over? The Brexit negotiations could also throw a wrench in the works.

Anatole Kaletsky at Gavekal thinks Draghi is still far from reversing course. He expects that the first tightening steps won’t happen until 2018 and anticipates continued bond buying (at a slower pace) and near-zero rates for a long time after.

But he also sees risk and makes an important point.

The US’s tapering and now tightening coincided with the ECB’s and BOJ’s both opening their spigots. That meant worldwide liquidity was still ample. I don’t see the Fed returning that favor. Draghi and later Kuroda will have to normalize without a Fed backstop—and that may not work so well.

China is by all appearances unstoppable.

GDP growth has slowed down to 6.9%, according to official numbers. The numbers are likely inflated, but the boom is still underway.

A report from the People’s Bank of China showed off-balance-sheet lending far higher than previously thought and accelerating quickly. (Interestingly, the Chinese have made all of this quite public. And President Xi has taken control of publicizing it.) 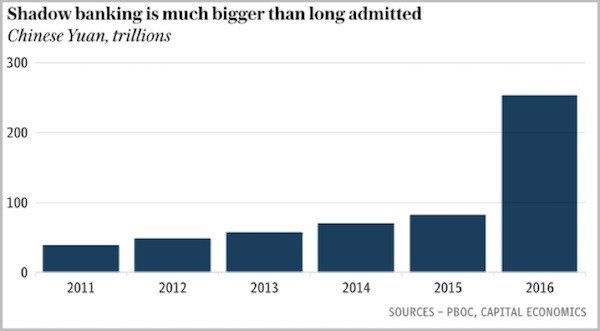 The huge increase last year probably reflects efforts to jump-start growth following the 2015 downturn. Banks poured fuel on the fire, because letting it go out would have been even worse. But they can’t stoke that blaze indefinitely.

President Xi Jinping has been trying to dial back credit growth in the state-owned banks for some time; but in the shadow banks that Xi doesn’t control, credit is growing at an astoundingly high rate, far offsetting any minor cutbacks that Xi has made.

A market in which “they all think the government will save everything” is generally not one you want to own—but China has been an exception. It won’t remain one forever. The collapse, when it comes, could be earthshaking.

It is very possible that any of these black swans could trigger a recession in the US. And let’s be clear: The next US recession will be part of a major global recession and will result in massive new government debt build-up.

It will not end well.