Blockchain… the smartphone… 5G…Over the last 20 years, we’ve lived through a END_OF_DOCUMENT_TOKEN_TO_BE_REPLACED

Joe grew up in Florida and never bothered to join the military. I suppose he was busy playing shuffleboard or whatever the hell they do down in Pensacola. Ever since Joe entered the political scene, he’s been part of the neocon gang. You know, rubbing elbows with the likes of Bill Kristol, Paul Wolfowitz or his wife’s late father Zbigniew Brzezinski — chicken hawks who clamor for the blood of young Americans in a perverse, ritualistic manner.

Now, obviously feeling his oats for being a hardcore Never Trumper, making all sorts of new friends in the liberal media, Scarborough tweeted out a criticism to today’s youth, upset over their lack of enthusiasm for military service, opting to instead stay at home playing video games.

Young men in the 1940s liberated Europe from Nazism and the Pacific from the Japanese Empire. Today, too many stay home playing video games. https://t.co/e7FTe0O20P

Being an avid collector of old newspapers, and regular peruser of old articles on Google’s News Archive, I can tell that before and during WW2, there were countless older men penning articles critical of the youth of that time, who went on to become ‘the greatest generation.’ They called them soft and bitter, accustomed to American decadence, unable to go toe to toe with the hardened Hitler youth.

Here’s a letter from a fallen serviceman at Midway, discussing this very topic. 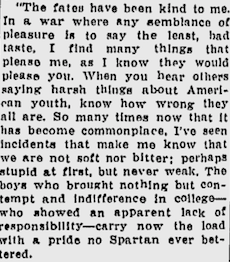 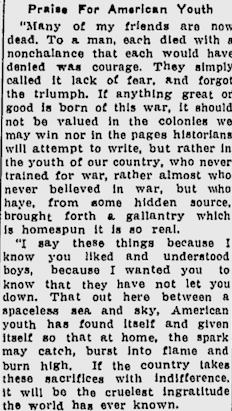 The subsequent result of Joe’s tweet was acrimonious attacks on an industrial scale.

No one wants war. Even the Greatest Generation would have preferred not to go. Uncle Sam had other ideas. https://t.co/K8NzO3NS8A

It is ironic you say this on Purple Heart Day. My Marine Corps Company had 48 Purple Hearts, almost all were millennials. #purpleheartday https://t.co/6i7BL0USzm

Where do the thousands of millennials who went to Iraq under false pretenses fall into the equation here? https://t.co/LU15sDM1y4

Alternate take: If we had had video games in the 1940s, maybe there wouldn’t have been a horrific World War! https://t.co/x1GIgOwDeJ

Yeah damn I mean where is a World War when you need one to free Millennials from their couches. https://t.co/fYzj0RmtLb