Short sellers are rarely popular, but their job is important. As I END_OF_DOCUMENT_TOKEN_TO_BE_REPLACED

Bank stocks, admittedly, are not the sexiest investment vehicle. After all, with END_OF_DOCUMENT_TOKEN_TO_BE_REPLACED

When screening the market for stocks that are trading at fair prices, END_OF_DOCUMENT_TOKEN_TO_BE_REPLACED

Jeffrey Gundlach Warns "The Goldilocks Era Is Over"

Easy monetary policies during the post-crisis period have propelled equity prices higher and driven bond yields lower. But as central banks reverse their quantitative easing (QE) and raise rates, this “Goldilocks era” will come to an end, according to Jeffrey Gundlach.

Gundlach is the founder and chief investment officer of Los Angeles-based DoubleLine Capital. He spoke via a webcast with investors on December 5. His talk was titled, “So Far, So Good,” and the focus was on his firm’s flagship mutual fund, the DoubleLine Total Return Fund (DBLTX). The slides from his presentation are available here.

Markets may give back some gains, but a recession is not imminent. “We do not see anything that indicates a recession in the next six months,” he said.

The main theme in the bond market, Gundlach said, is central bank policies. The Fed is raising rates and quantitatively tightening, which it euphemistically calls “normalization.” But the European central bank (ECB) is still easing.

A key issue, which Gundlach has explored in prior webcasts, is why the ECB is easing while the Fed is tightening. He said the ECB is still expanding its balance sheet by approximately a billion euros per month. Mario Draghi has said the ECB will not raise rates above zero until well past the end of its QE, despite the fact the global economy, according to Gundlach, is “looking better than it has in recent years.”

Gundlach presented data on the developed economies, showing which were contracting, expanding or accelerating. For the first time since the global financial crisis (GFC), he said, none are contracting and many more are accelerating than are expanding. Reported economic indicators, he said, are coming in better than expected, based on the Citibank “surprise index.”

Even China is “doing just fine,” according to Gundlach. He said its GDP, which is usually a source of skepticism, has been growing at 6.8% to 7% for the last five years. But other data sources (e.g., electrical power usage and rail freight) corroborate and even suggest that those GDP growth rates may be understated.

What is responsible for this growth? Gundlach said it is stimulative monetary policies, despite the fact that they don’t make sense in Europe. Looking across global central banks, he said, in aggregate their balance sheets have being going up constantly since the GFC, except for small “blips” in 2009 and 2013. That growth has paralleled increases in equity prices.

The shrinking supply of bonds

Gundlach discussed how a key driver of interest rates will be the supply of bonds.

Japan has accelerated its QE, Gundlach said. He noted that 45% of Japanese government bonds are owned by banks (mostly for regulatory reasons) and 43% are owned by the Bank of Japan (BOJ). Only a few percent are owned by life insurance companies and a small portion by individuals. He asked rhetorically what would happen if the BOJ bought all the bonds and then “forgot about it.” “We may find out,” he said.

The Fed has reduced its balance sheet as per its plan, Gundlach said. QE has been highly correlated to low volatility and equity price gains. But that relationship will end by 2019, when the remaining central banks are expected to be in tightening mode, he said.

Below is what Gundlach called “the chart of the webcast.” It shows that total central-bank bond purchases and world equity-market performance (both measured as 12-month rates-of-change) have been highly correlated. 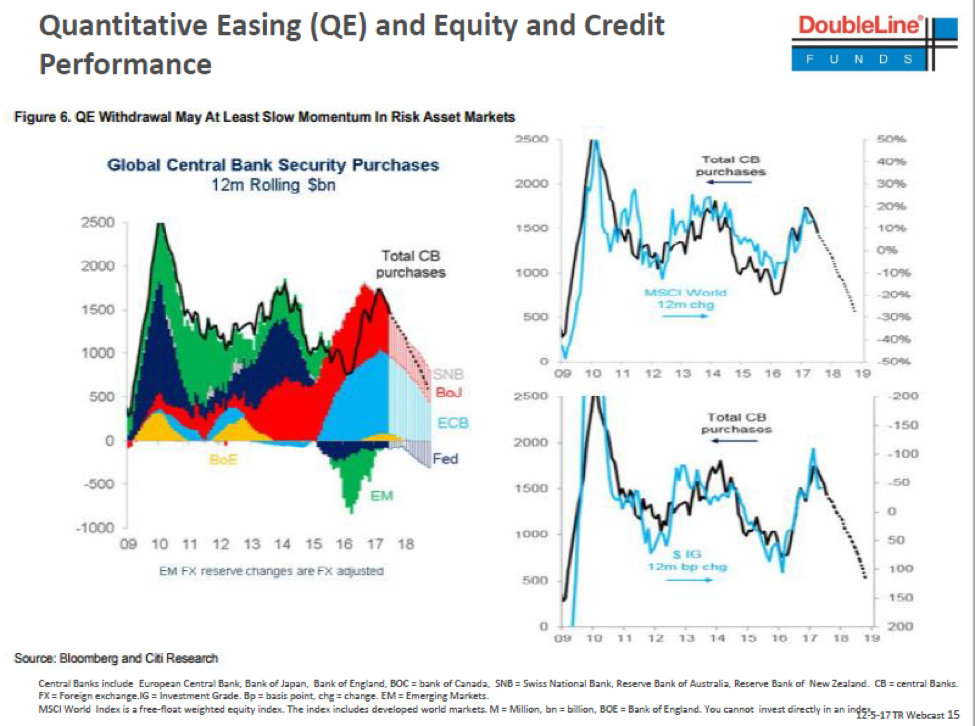 QE has been “clearly correlated” with credit spreads, Gundlach said, but we are “getting very near the end of the corporate credit cycle in terms of the outperformance versus Treasury bonds.” He said the junk-bond spread to Treasury bonds has widened a little bit in the last month, “but not nearly as much as it does prior to a recession,” he said.

Interest rates are “absurdly low” in Germany, Gundlach said. The German 10-year rate is approximately 40 basis points, partly because of a lack of supply. He said that from 2015-2017 there was a negative net-supply (the volume of issuance was less than maturities) for the “G3” (the U.S., Europe and Japan), but that will change in 2018. The gap between issuance and maturities will increase further in 2019, he said. “A recession in the next two years would trigger a bigger surge in bond issuance,” Gundlach added.

“It will be interesting to see if the bond market can hang on with the coming supply,” Gundlach said, “in addition to the easing of monetary policy.”

Gundlach cited an academic study showing that the Fed funds rate would have had to go to -300 basis points to produce the same effect (in term of GDP growth) as QE. Applying this analysis to the ECB’s monetary policy, it shows that the U.S. is effectively tighter than the ECB by 700 basis points. “Either Europe has to have substantially better economic performance,” he said, “or this theory is invalid.”

But Europe’s economy is doing as good as or better than the U.S. based on almost all indicators, Gundlach said, including manufacturing, retail sales and GDP growth.

The ECB has never eased when the purchasing manager index (PMI) has been above 55, as it is now. “If the PMI pushes higher it will be tough for Draghi to maintain his rhetoric,” Gundlach said.

“One of these days Draghi will acknowledge that the economy is better than when monetary stimulus started, which would trigger higher yields,” Gundlach said.

The yield curve and the recession watch

The yield curve has flattened and many analysts have tried to “explain that away,” Gundlach said, claiming that such a move doesn’t matter as a recession indicator. But he said that the movement in the yield curve suggests that “we are in the later stages of the credit cycle.” The spread between yields on two- and 10-year Treasury bonds has decreased from 275 basis points in 2013 to 52 today.

“It is relentlessly flattening and sending something of a signal,” Gundlach said. “If it goes to zero, it is a flashing yellow light that we are closer to a recession.”

The leading economic indicators (LEIs) in the U.S. are “downright strong,” he said, and near their best levels since 2010. At the level where the LEIs are, he said, it would take a year to get to recessionary level.

Manufacturing and service PMIs are strong, he said, and usually “tank” six months before a recession.

They are very highly correlated to nominal GDP growth. If anything the PMIs imply that nominal GDP could pick up, he said.

Junk-bond spreads widened about a year before the 2001 recession and about six months before the 2007 recession. They have moved in 2017, Gundlach said, but not enough to cause a recession alarm. “It will take a bigger move than has happened this year.”

Commodity prices bottomed out in 2016 and have been flat this year, he said.

Commodity prices typically rise going into recessions, such as in 2001 and 2008. There hasn’t been a recession without such a move. “So far it is not enough to cause an alarm,” he said.

Predictions for inflation and interest rates

Headline inflation in the U.S. has risen, Gundlach said. “If this continues, the Fed would have ample reason to follow through on its indicated three rate hikes in 2018.”

“Commodities have bottomed out and are at a level where they are a good buy,” Gundlach said. “Maybe you should buy them now.”

He said he would own broad-based commodities over gold.

Gundlach discussed how the Republican tax plan would affect interest rates. He said this is a “strange environment” to cut taxes, because we usually do that when the economy needs a boost. A tax cut will reduce revenue, grow the deficit, grow bond supply and boost economic growth, all of which will be “bond unfriendly.” He said he has seen some movement in the bond market over the last month that could be attributed to a reaction to the tax cut.

A huge share of federal revenue is from individuals and only 13% is from corporations. “It is strange that there has been so much focus on this issue,” Gundlach said.

Concerns over the debt-to-GDP ratio have “fallen off the radar” since 2011, Gundlach said, when there was panic over the possibility of a ratings downgrade for Treasury securities. Now those concerns are returning, he said, because of the growth in entitlements and the tax plan.

Gundlach has previously predicted that the yield on the 10-year Treasury bond would be 6% by the next presidential election (in 2020). On this point, he said, “Why not? We could tack on 75 basis points per year for the next five years.”

If the 30-year yield goes up another 50 basis points, Gundlach said, “then the bond bull market is over and the 6% yield is more likely.”

He said that bond investors should not be in an index fund with a duration of 6 (presumably referring to the AGG). Nor should they be in corporate bond funds, which have attracted a lot of money because they have done well. Investors should want lower duration bond funds, Gundlach said.

As a final warning, he said that there is “plenty of leverage in the system,” as markets have performed well with low volatility. But higher rates will “hurt highly leveraged strategies.”