It May Get Worse, But Shell’s On The Right Track

Markets were hit hard by the COVID-19 pandemic, but few stocks have suffered as much as energy stocks. These companies are facing lower gas/oil prices as well as longer-term demand headwinds. Out of the energy companies, Royal Dutch Shell (RDS.A) has shown financial responsibility and foresight which is why I am bullish long term.

Like most energy companies Shell has seen better days. The company recently reported it would be writing off over $22 billion in assets. To better understand just how Shell operates, I have taken an extract from the latest yearly report. 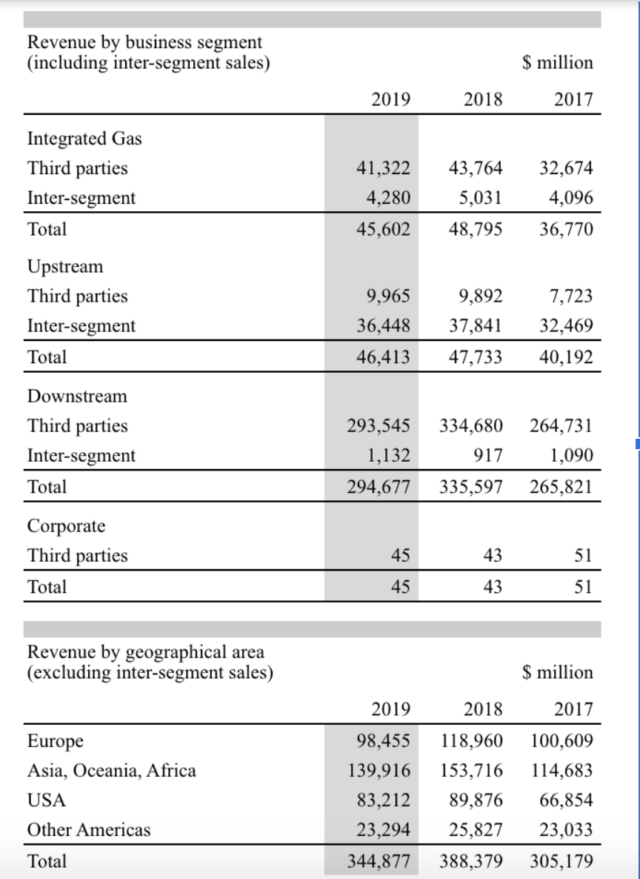 The first important thing to point out is that Shell is mostly a downstream company, meaning it obtains its revenues from extracting energy resources. The other interesting thing to note is that Integrated gas has grown quite a bit as part of the revenue. Lastly, it is worth noting that Shell's revenues are quite well diversified. The Asia Oceanía, Africa segment makes up the bulk of revenues, although Europe and the USA combined mold to account for just under 50%.

Before we move on, let's also have a look at the balance sheet: 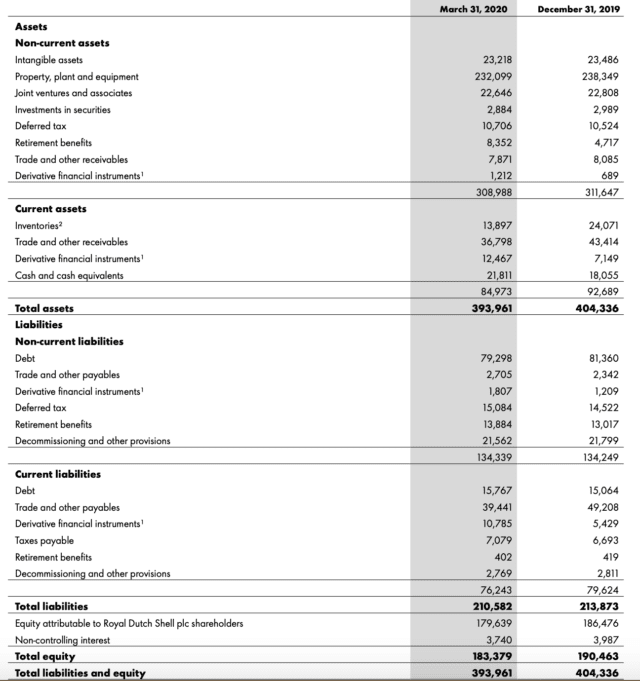 Royal Dutch Shell has reduced both its assets and liabilities. Despite being a capital intensive business, the company's balance sheet remains quite strong. The current ratio is around 1.11 and the company is well-capitalized, with a D/E of 0.44. Although the company has a historically high level of debt, the solvency of this company is nowhere near being put into question. The issue with Royal Dutch and other energy companies is revenues.

The Worst Is Yet To Come

Since the market bottom in March, energy companies have had a mixed performance. After oil plummeted, the sector bounced back strongly. Shell went up to $38/share, and like most other energy companies has traded flat for the past two months. In the last 2 weeks, however, renewed concerns over COVID-19 and a second wave have hurt markets, but more so energy companies, with Shell price falling around 6% in the last 5 days.

The question we must ask ourselves is where do we go from here. The energy sector as a whole may be facing long-term headwinds. First off, concerns over health and safety highlighted by the virus will likely put a dampener in travel demand for the next year at least. On top of that, environmental concerns are also pushing people, especially young people, to reconsider how they live and reduce their energy consumption.

While we do not have the second-quarter report out yet, Shell does provide some preemptive information on the matter on their website:

- As previously communicated, more than 90% of our term contracts for LNG sales in 2019 were oil price linked with a price-lag of typically 3-6 months. Consequently, the impact of lower oil prices on LNG margins became more prominent from June onwards

- Gearing is expected to increase by up to 3% due to the impairments. Additional impacts to reported gearing levels are expected due to pensions revaluations associated with the current interest rate environment along with other usual quarterly movements.

- Oil Products sales volumes are expected to be between 3,500 and 4,500 thousand barrels per day, driven by a significant drop in demand related to the impact of COVID-19

So what do we gather from this information? As the title suggests, I believe the worst is yet to come. Production will remain low due to demand and since there is a lag in prices, the company will be feeling this impact in the following months. This is the biggest challenge that the sector is dealing with right now, for both the long and short term. 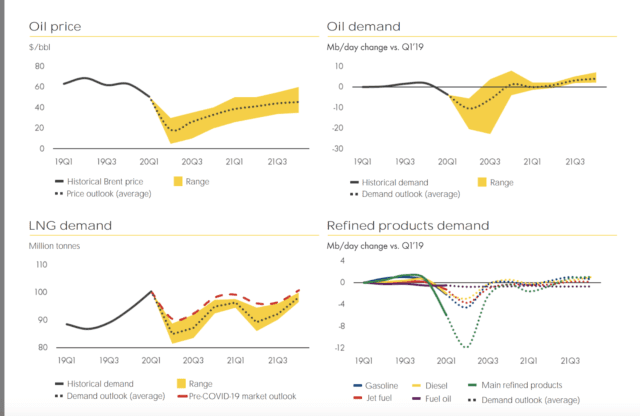 Shell forecasts that the price of oil will likely stay below $60 for the remainder of 2020 and 2021. This will be due, in part, to the fact that oil demand is expected to stay quite flat during the same period. Bear in mind, Shell is more than anything a downstream provider, and it will be the most adversely affected by the lower price environment. Another problem Shell faces is that most of its revenues come from oil. Gas, however, looks to have some better prospects than oil, which is why Shell is expanding into gas and other areas.

Shell Is On The Right Path

First and foremost, I will say that I support Shell's decision to cut its dividend. I recently wrote an article on Exxon Mobil Corporation (XOM) and pointed out that their efforts to maintain the dividend would come at the expense of long-term financial health. Shell, on the other hand, has taken the prudent approach, cutting the dividend and saving themselves $10 billion. The dividend cut was the right thing to do and shows Shell's commitment to the long-term prospects of the company.

The company will be putting this money to good use, and although they will likely fall short of their green energy targets, the company is at least on the right path to reinventing itself. The IEA reports that solar energy will be the highest growth energy sector for the next 30 years. Royal Dutch Shell recently launched its Gangarri Solar Project, which powers over 50,000 homes in Australia. Furthermore, Shell has been investing in green tech since 2018 through its partnership with National Renewable Energy Laboratory, (NREL). Through the "Shell GameChanger Accelerator Powered by NREL", GCxN for short the company has been funding various cleantech startups.

Therefore, Shell is not just spending money on actually producing green energy, it is doing one better; developing the technology to make clean energy for everyone an achievable goal. Amongst other things, the GCxN is involved in projects involving clean energy storage and flow batteries.

Green energies will play an important role in the future, but for now, I believe that the company's focus on increasing their gas production is the right way forward.

In this arena, the most interesting project the company has is the Arrow Energy's Surat Gas project, also in Australia. This is an equal split joint venture between Shell and PetroChina (PTR). At peak production, it should bring around 90 billion cubic feet per year of new gas. On top of that, the company has an agreement with Ecopetrol to develop three gas blocks in the Caribbean. Lastly, the company also has a bid in place to begin extraction in the Gulf of Mexico. Gas will be the stepping stone into renewable energies, and Shell is doing everything in its power to transition to it.

As far as I can see, Shell is keeping its options open and investing in both the present and the future of energy in a sustainable way.

With the dividend cut priced in, the valuation has never looked better for Shell. Below I compare some valuation metrics for Shell and some of its competitors; Exxon, BP plc (BP), and Equinor ASA (EQNR), TOTAL S.A. (TOT) and Chevron Corporation (CVX)

Now, we must bear in mind that, unlike XOM, BP and RDS did cut their dividend. As we can see, this creates quite a disparity between P/Es with the latter trading at below half the P/E of XOM. However, RDS is the cheapest by two of my favorite measures; P/B and Price/Cashflow. Levered FCF, is in the middle of the pack, with TOT, EQNR, and CVX showing superior registers. However, this is because Shell is less levered, which will probably change shortly, as management said they will be increasing gearing.

Shell not only has the best valuation, but it also has one of the strongest balance sheets. Once the dividend is proven to once again be sustainable and growing, I would expect RDS to trade much nearer its historical P/E of around 15, providing us with significant capital appreciation.

The bottom line is that Shell is an energy giant with a remarkably strong balance sheet. By leveraging its balance sheet, investing in new technology, and expanding into gas and other energies the company can easily recover its previous levels of cash-flow and dividend payout. At today's price, Shell looks like a long-term bargain.