It May Be Time to Wait for the Storm to Pass

One of the most common misconceptions among retail investors is the belief that active traders must always be actively trading. This simply isn’t true.

In fact, one of the greatest benefits of being an active trader instead of a passive investor is you can choose when you want to trade and when you don’t.

This has been our approach in the Strategic Trader portfolio while the financial markets have been in upheaval the past few weeks.

We haven’t completely stopped trading during these turbulent times. On the contrary, we have identified a few excellent opportunities to profit from the market’s current situation.

We have, however, reduced our trading velocity as we’ve been waiting for the stock market to find some stability. After all, there’s no need to try and force a trade just so you can say you’re making trades.

We don’t expect this situation to last forever though.

Based on a few of the contrarian indicators we have been watching, we have reason to believe we are getting closer to finding some stability, at least in the near term.

We’ve been watching the following three key contrarian indicators to see what they can tell us about the possibility of the S&P 500 finding support:

Today, we’re going to take a closer look at all three of these indicators.

Most traders tend to focus solely on the CBOE Volatility Index (VIX) when they think about measuring trader sentiment.

The VIX is a measurement of the anticipated volatility being priced into S&P 500 options for the next 30 days, and sometimes focusing only on the next 30 days isn’t a long enough view.

Sometimes it is helpful to expand your horizons out to the next 3 months, or 90 days. When traders need a longer-term outlook, they can look at the CBOE 3-Month Volatility Index (VIX3M), which is a measurement of the anticipated volatility being priced into S&P 500 options for next 90 days.

What Happens When the VIX Is Higher?

So where is the VIX/VIX3M now?

According to the chart below, the VIX/VIX3M is currently sitting at 1.3. 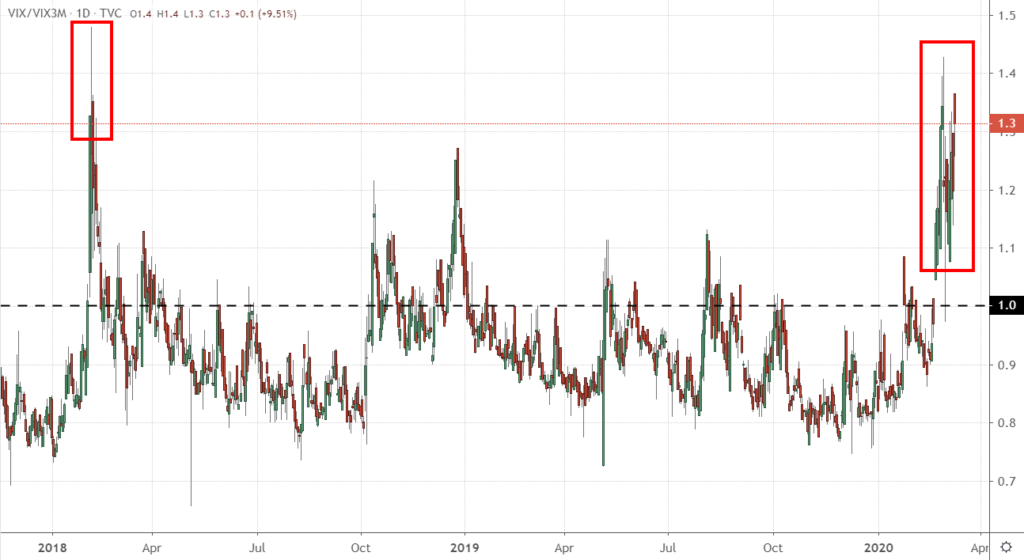 This is well above the threshold that most traders are watching for. In fact, this is the highest the indicator has been since early 2018, when the market started pulling back as longer-term yields were climbing higher — sparking concerns that the economy was slowing down.

The readings on the VIX/VIX3M are even higher than they were during the bear-market pullback of late 2018.

Typically, these extreme levels of bearishness don’t last long. Once the market moves to these extremes, bearish momentum will usually subside as sentiment reverts to the mean.

We wouldn’t be surprised to see the same thing happen here.

The next indicator we have been watching is the number of S&P 500 components that are trading above their 200-day simple moving average (SMA). 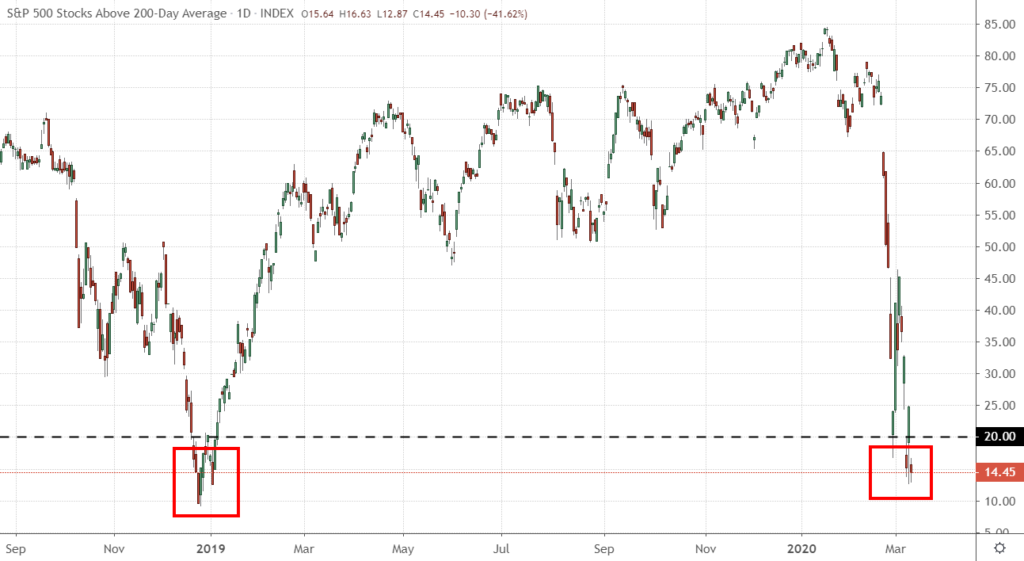 While it may be a bearish sign that so few stocks are trading above their 200-day SMA, this chart can also serve as a contrarian indicator.

When the number dips too low — below 20% — it suggests the pendulum has swung too far from bullish to bearish and the market may be set for a rebound.

We’ve seen that happen a few times during the past few years, and the pendulum may be ready to start swinging back toward the bullish side — above 50% — of the chart soon.

The last time this chart dipped below 20% was during the bear-market pullback of late 2018, and the S&P 500 enjoyed a strong rally as the pendulum swung back after that pullback.

Looking at the chart of the CBOE Put/Call ratio below, you can see that traders have been purchasing many more puts than calls this week. 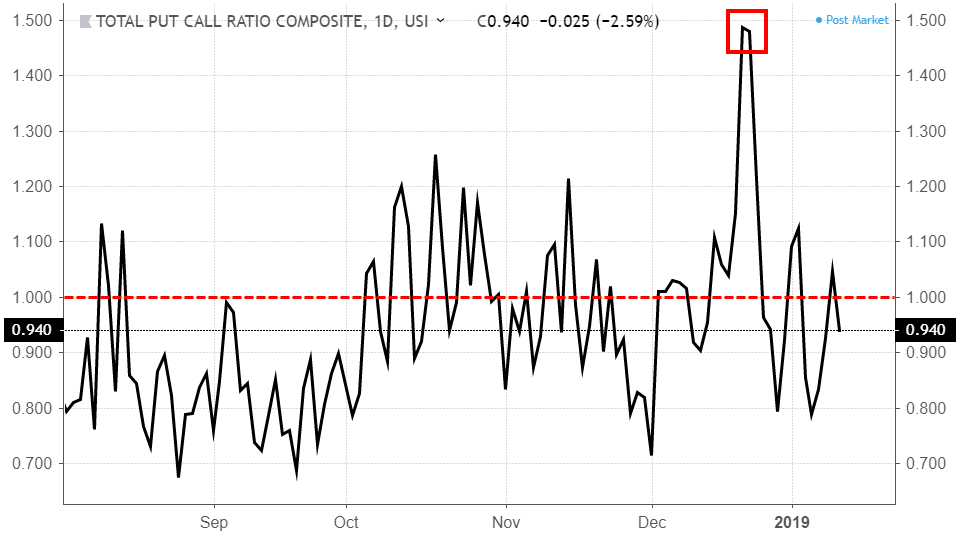 The last time the CBOE Put/Call ratio was this high was during the bear-market pullback of late 2018. It briefly rose to 1.825 before retreating to consolidate below 1.

On Monday, the CBOE Put/Call ratio rose even higher, tapping 1.836 before pulling back.

These extremely bearish surges often indicate the last panicked bearish push before the market regroups and finds support. We’re waiting to see if that happens again this time.

You can see on the daily chart below that 2,725 had served as support in the past, but that level couldn’t hold during today’s selloff. 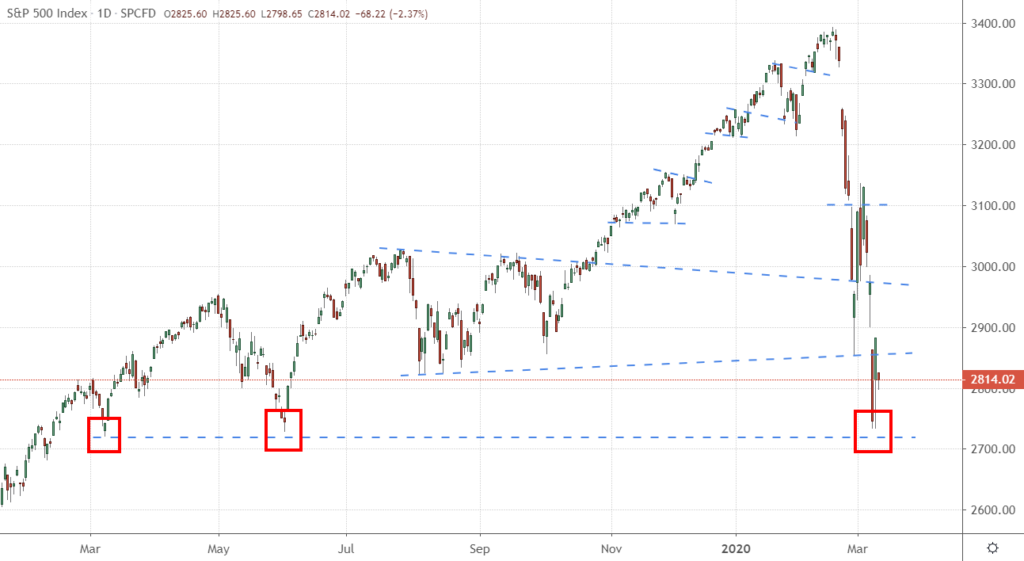 The next level we were watching was 2,600. This level was based on the longer-term up-trending support level that has been interacting with the index for the past few years, but just like 2,725, it didn’t hold.

You can see this level on the weekly chart of the S&P 500 below. 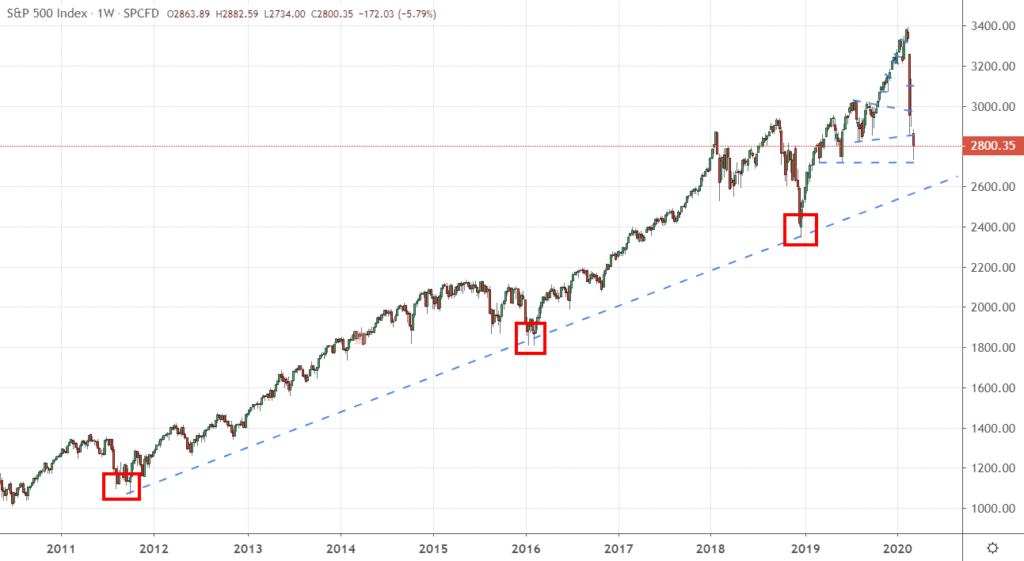 Despite the speed of the decline, the market rarely moves in one direction like this for several days in a row. Usually, panic selling is interrupted by panic buying — and short-covering — like we saw on Tuesday.

We think investors looking to buy off the lows could send the index up at some point over the next 1 to 3 days, giving the market a chance to establish a bottom. At the very least, it will give traders a chance to catch their breaths.

We will remain patient until we see what the fundamentals look like at that point.

The dramatic volatility we’ve been living through on Wall Street for the past few weeks hasn’t showed any signs of letting up. However, there are signs we could find support soon.

We plan to be strategically cautious until that support is confirmed.