Our man Jay Powell is talking a little more about raising rates. END_OF_DOCUMENT_TOKEN_TO_BE_REPLACED

Cheap stocks continue to be the land of opportunity for aggressive investors.We END_OF_DOCUMENT_TOKEN_TO_BE_REPLACED

Is Alphabet Stock Gaining Steam or Losing It?

Shares of Alphabet have been quite disappointing, up just 4.25% so far on the year. That's despite the Nasdaq rallying 18.3% in 2019 and the PowerShares ETF jumping 19.3%.

It's also the biggest laggard among the FAANG group. Amazonand are up 24.7% and 23%, respectively, while Facebook and Netflix are up 34% and 33.8%, respectively.

When shown in this light, Alphabet stock looks even worse. That said, with Monday's 2% rally building on Friday's gains, some investors are carefully watching the stock. Is it finally gaining some steam or is it in the midst of losing it?

To answer that, I think we can say that Alphabet stock is gaining steam in the short term but still losing steam in the intermediate term. In a more ideal world, it would be the other way around and it doesn't help that the Department of Justice is sniffing around the company for antitrust concerns.

Let's look at the charts to see if they can shed any light on the stock. 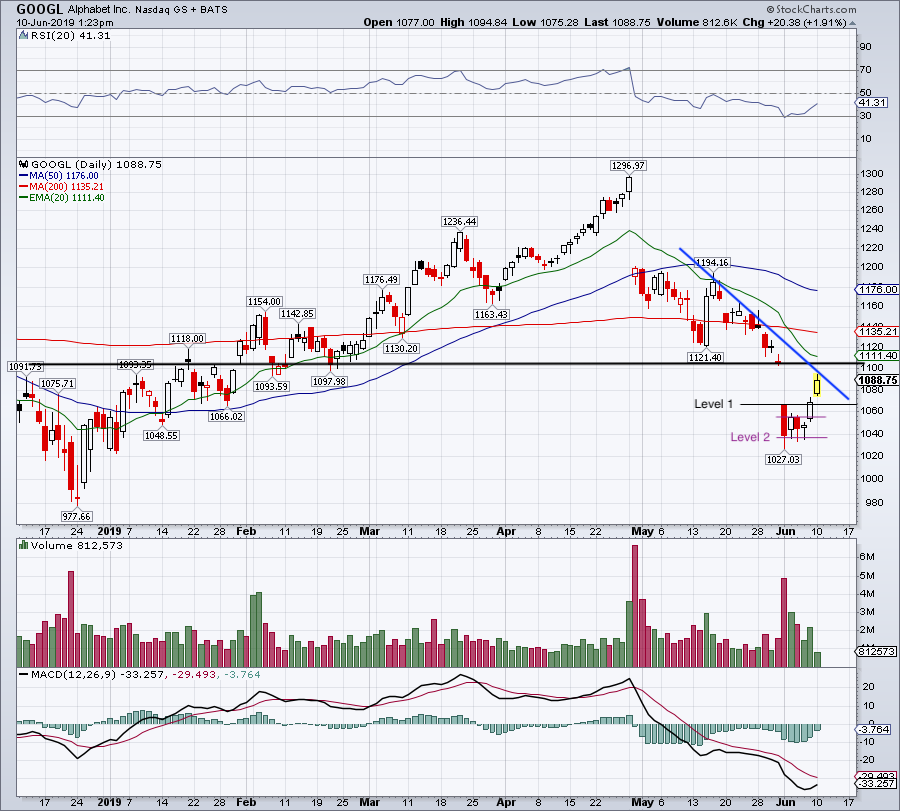 Alphabet stock was already riding a wave of negative momentum before the DoJ news. After the company reported disappointing earnings in late April, shares went from new highs to below the 50-day moving average in just two days. The 50-day and 20-day moving averages ultimately turned to resistance, before the 200-day gave way as well.

A week ago, on June 3, Google plunged on the antitrust investigation news. Even though the Nasdaq soared all week after that, Alphabet stock could barely reclaim Monday's highs by Friday on the daily chart above (marked "Level 1"). However, it did a good job of holding support (marked "Level 2") just below $1,040.

This Monday we're seeing a nice push into the gap caused from last week. Should GOOGL stock fill this gap, it will take the stock price to just over $1,100. However, potential short-term downtrend resistance (blue line) and the 20-day moving average up near $1,111 may very well act as resistance.

So in the short term, Alphabet has some momentum at its back. The question is whether it can build on that momentum and continue to push higher or give back that momentum and fall lower. If it's the latter, it's vital that shares hold support near $1,038, otherwise a retest of last week's lows are on the table.

In that case, it also puts a test of long-term range support on the table near $1,000. 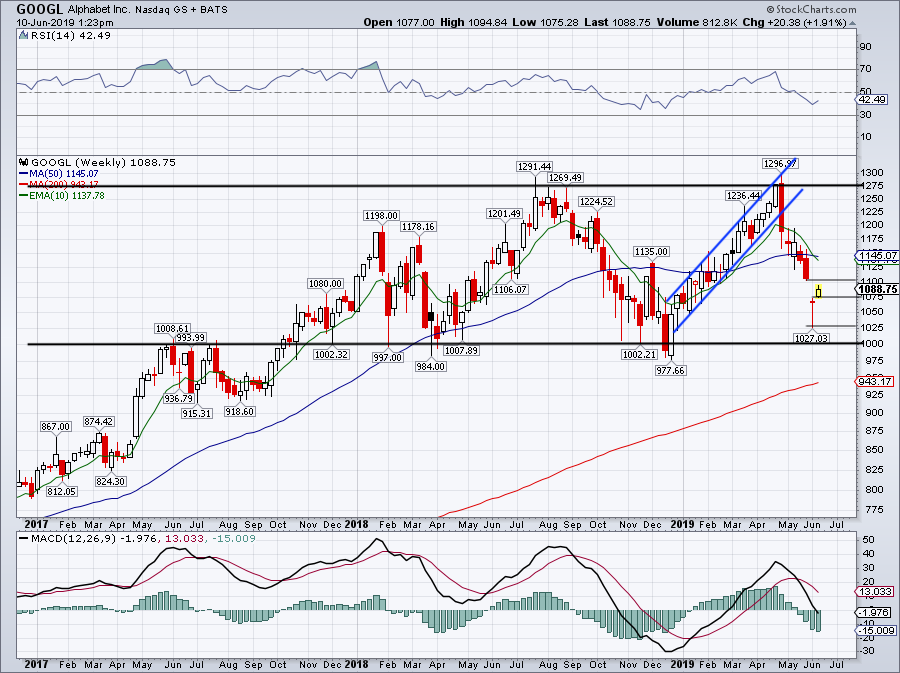 Those levels are laid out on the weekly chart above. Also highlighted on the chart is the 10-week moving average crossing below the 50-week moving average, a bearish technical development that suggests intermediate term momentum has waned. This conflux is up near $1,140 and trending lower. I would expect it to act as resistance should GOOGL stock push that high and at the very least, suggests that Alphabet stock will have its work cut out for it if it wants to get back to range resistance near $1,275.