European equities are now up more than 16% this year with both the DAX and Euro Stoxx 50 back in bull territory. While such a broad rally should suggest optimism and increased appetite for risk, sentiment indicators signal otherwise. Cautious is needed as a number of indexes are approaching strong resistance levels.

No matter how you look at it, the latest macro figures aren’t great. Geopolitical issues are here to stay and equities outflows have not reversed. Still, the market has rallied relentlessly. Whether it’s complacency or fear of missing out, traders are still buying. 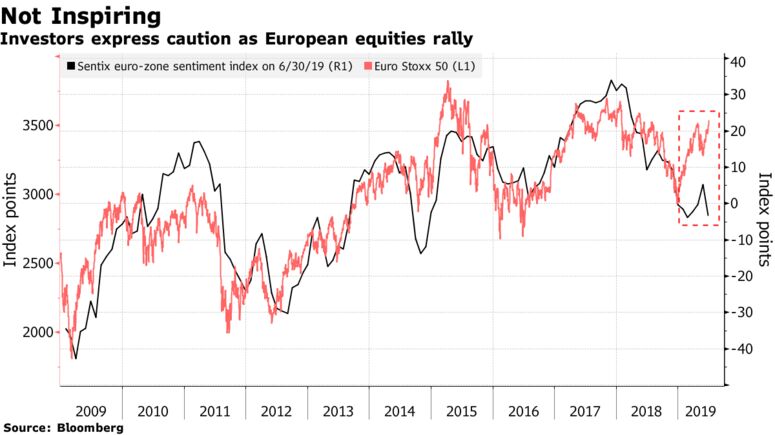 The Stoxx Europe 600 estimated price-to-earnings ratio has risen back to 14, near a one-year high hit in April. The re-rating was purely driven by price, as EPS estimates have been relatively stable.

Barclays strategists say despite the rally, investors continue to de-risk and move into relative safe havens, like bonds and cash. They call it an “unloved” bull market. Global sentiment remains negative, whether you look at the Sentix index in Europe or the AAII Bull-Bear spread. The continuous rally in gold and the strong inflows into the metal’s exchange-traded funds is another sign of caution.

The sector momentum map also hints at the careful general sentiment. Investors may buy, but they favor safer or defensive sectors. Over the past 12 weeks, food & beverages have been leading, while momentum has been strengthening fast for utilities, health care, and even telecoms. By contrast, the drive for banks, basic resources, autos, retail and oil & gas has been weakening as fast. 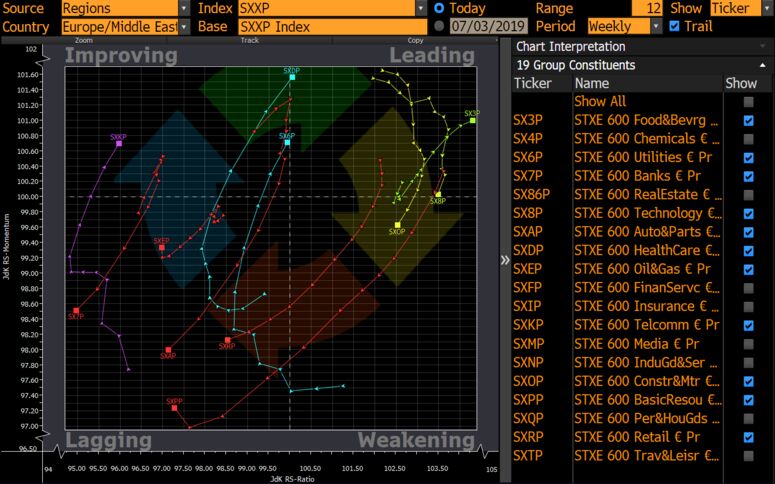 Technically, the Stoxx Europe 600 is testing strong resistance levels. The index failed to break out from last July’s high (392.7) on several occasions in April this year. The index has also reached overbought territory. 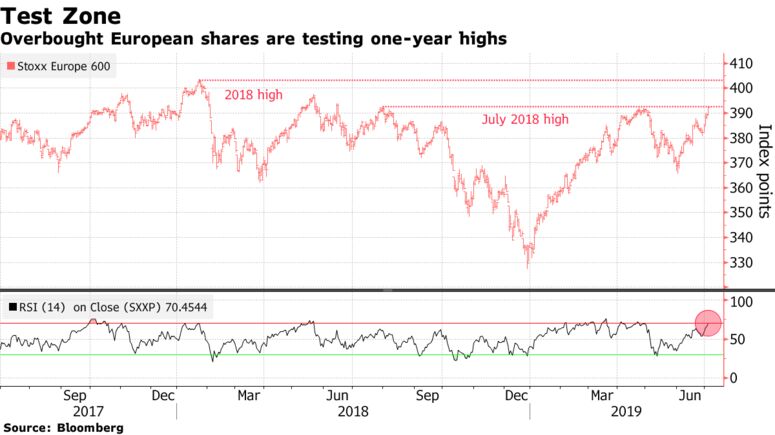 The strong correlation between asset classes (almost everything has rallied this year) and the collapse of volatility, is increasing the risk of a broad negative turnaround, according to Unigestion strategists. The asset manager says in a note this week that it continues to use derivatives for equity downside protection. The low volatility may indeed create some cheap opportunities to hedge portfolios.

That said, Unigestion remains positive about risk assets, as investors’ positioning is still low, especially as it might be risky to fight the tape and the Fed, they say. 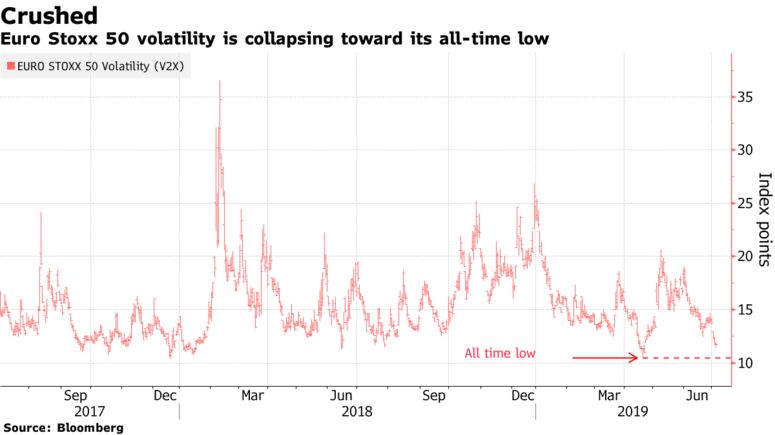 Clearly, the higher the market goes without a real resolution to the China-U.S. trade conflict or an effective central bank policy easing, the greater the risk of disappointment. The market is currently pricing a 100% probability of a Fed rate cut at the next meeting on July 31. The 50bps cut probability is about 24%.

In the meantime, Euro Stoxx 50 futures are trading little changed ahead of the open, while volumes might be lighter than usual as U.S. markets will be closed for Independence Day.

NOTES FROM THE SELL SIDE: