Investors have been awaiting Dec. 15 as a pivot point for the stock market, with expectations the U.S. and China would agree to a first phase trade deal and stocks would then glide higher, capping a strong year with some late December gains.

But comments Tuesday from President Donald Trump that he could wait until after next year’s election for a deal added to a growing unease as trade talks showed no new signs of progress. Stocks were hit hard Tuesday, with the Dow down 278 points, or 1% to 27,503, on top of a 268-point drop Monday.

Dec. 15 is the date when tariffs on another $156 billion in Chinese goods would go into effect, and economists have viewed these tariffs as potentially the most damaging, since they directly target consumer goods.

“I think investors are using Dec. 15 as a barometer. It’s probably the purest, simplest barometer, to see if progress is being made. If it isn’t, we’ll probably limp in the rest of the year,” said Jack Ablin, chief investment officer at Cresset Wealth Advisors.

Some traders viewed Trump’s comments as a bargaining ploy. However, the president’s actions over the past few days have sent a harsh reminder that he intends to play hardball on trade, not just with China but with other trading partners, after his threat of new tariffs on Brazil, Argentina and France.

“I think the jury is still out on that, and that’s why the market is beginning to reset expectations,” said Daniel Deming, managing director at KKM Financial. “Is this just another one of those ploys or is this something they’re going to stand fast on?”

Expectations in the final days of November had been high that the deal would get done, and the market would add to the year-to-date gain of 25%. December is often positive for stocks, but last year the market lost about 9 percent in the month. 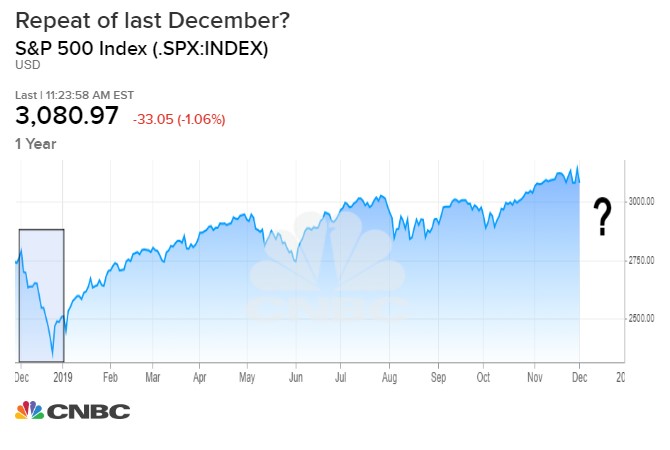 “It seemed phase one might get done. In the last couple of days, that mindset has been challenged in the market, and that’s what you’re seeing. …Then you get the psychological impact of last year coming into people’s minds.,” Deming said. “You’re seeing some repositioning of exposure, and they’ve had a great year. Why not take some chips off the table?”

Commerce Secretary Wilbur Ross told CNBC on Tuesday that Trump would be willing to leave tariffs in effect if he doesn’t get the deal he wants. He also said no high-level talks are scheduled, and the situation in Hong Kong has been a factor. Trump signed legislation last week supporting Hong Kong protesters.

“The new variable is the Hong Kong situation. That’s complicated life for President Xi [Jinping]. They got somewhat upset when the president signed that bill,” said Ross, adding the bill would have been veto proof because of its wide support in the Senate.

Ablin said investors are faced with a tough choice. “One is to say, ‘I booked 30% this year. I don’t need to be any greedier than I already am. The other thing is, If I wait two or three weeks, I can push my capital gain into 2020,’” he said. “We’ll see how investors will fall out on that.”

Tariffs already in place and the prospect of more have slowed business spending and crimped the ability of companies to plan. They have also resulted in a scramble to change supply lines and relocations of some businesses from China. The next wave of tariffs would hit consumers for the first time.

“This [sell-off] is foreshadowing the imposition of the December tariffs. It’s hard to tell how this would affect the economy,” said Ablin.

He said the market could see a bigger sell-off if the tariffs are imposed, but he noted that last year when stocks skidded in December, the Fed was raising rates. Now, the central bank has reversed some of its hikes, with three rate cuts from July to October.

“I think the trade deal is important, but whether it’s the Dec. 15 deadline or not, don’t believe it will have the same magnitude of impact that raising short term interest rates did,” Ablin said.

Deming said investors were expecting some turbulence into January. He said there were heavy purchases of calls in the VIX, the Cboe’s Volatility Index. A popular trade was to sell one call and buy two high-side calls, signaling investors were expected a surge in market volatility.

Ablin said the trade deal could still happen, and that would be a positive. “It may be an 11th-hour negotiation tactic. China is under a fair amount of pressure, too. Pork prices are skyrocketing. Soybean prices are very high, and they’re staring down some relatively serious inflation,” Ablin said

Ablin said a first phase deal makes sense, and that’s what the market was hoping for. “In light of the Hong Kong situation and everything else, I think it would be difficult for President Xi to shake hands on a sweeping deal,” he said.

Trump has to show he made a tough deal politically, since a weak one would be attacked by Democrats.

“My expectation is they probably will get some mini deal done and that should assuage the market,” Ablin said.

“In order for the market to break through to new highs, we need resolution on trade, especially U.S.-China trade,” said Michael Arone, chief investment strategist at State Street Global Advisors. “I think you can see that each time the market makes new all-time highs, trade tensions escalate and markets become more volatile and sell off. That happened in May, and August, and now in the last couple of days. It’s become a vicious cycle.”

Trump, speaking in London on Tuesday, said he doesn’t watch the stock market, though he has tweeted to followers to “enjoy” its performance when it is at record highs. “I watch jobs,” he said, adding he wants to make the “proper deal.”