Whether I review our market commentary from one week ago or one month ago, we are in familiar territory. That is, key equity benchmarks are battling resistance levels, as equity option buyers continue to display levels of enthusiasm that we have not seen in years.

As contrarians, the optimism among short-term speculators continues to put us on alert, since the market tends to become more vulnerable when traders are positioned for the upside. But as we saw last month, when correction risk was similarly high from a sentiment perspective, support levels must also break to begin the process of a serious unwind in the optimism prevailing.

It was the latter that did not occur during a minor pullback late last month. For example, the Russell 2000 Index (RUT—1,467.55) held at the 1,400 level that at the time was the site of a trendline connecting higher lows since the March bottom. And a pullback in the S&P 500 Index (SPX—3,215.63) found support at the all-important 3,000 millennium mark. Finally, leading big-cap technology stocks, as measured by the Nasdaq-100 Index (NDX—10,483.13), never came close to breaking below the 9,600 area that we observed as potentially supportive.

As such, in the following month, the “buy the dip” mentality held, generating even more optimism among short-term speculators -- as you can see on the chart immediately below -- with the number of equity puts bought (to open) relative to equity calls bought (to open) at its lowest ratio in  years. 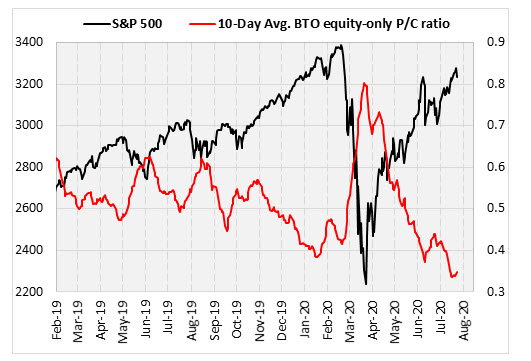 We enter this week with the RUT again battling the round 1,500 level, which is also 10% below the 2019 close, 50% above its March closing low, and near its 320-day moving average. The trendline connecting lower highs that we referenced last month is now sitting around 1,450, and will be at 1,475 at the end of this week. A close below this trendline would mean a bull could de-risk by lightening up significantly on small-cap exposure amid the current high expectations. For what its worth, the “doji” candlestick (the open and close are roughly the same) that occurred around the 1,500 resistance level in Thursday’s trading indicates a potential reversal of the uptrend since March. 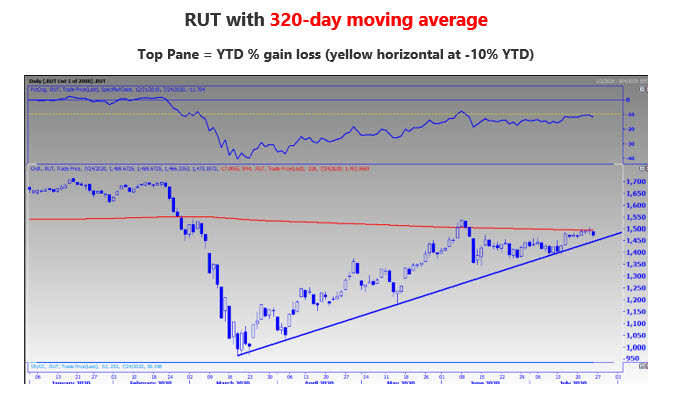 While the SPX managed to move above its 2019 close for the first time since February, it did not sustain this move, as selling on Thursday and Friday pushed the index back into negative territory at week’s end. Last week’s peak occurred around 3,280, which is just shy of the 3,300 level that is roughly 10% above the June low. I think it would take a move below the 3,100-3,120 area to begin to stir fear into option buyers, as this is the area at which the SPX broke out above a trendline connecting lower highs during the June pullback. This area is also the site of the SPX’s 50-day moving average, which it has not closed below since crossing over in late April. With retail money helping drive this rally, as well as a multi-year low in put buying (downside bets) relative to call buying (upside bets) on equities, a move below 3,100 would likely slow the call buying, thereby removing what has amounted to a major tailwind for this market in recent weeks. 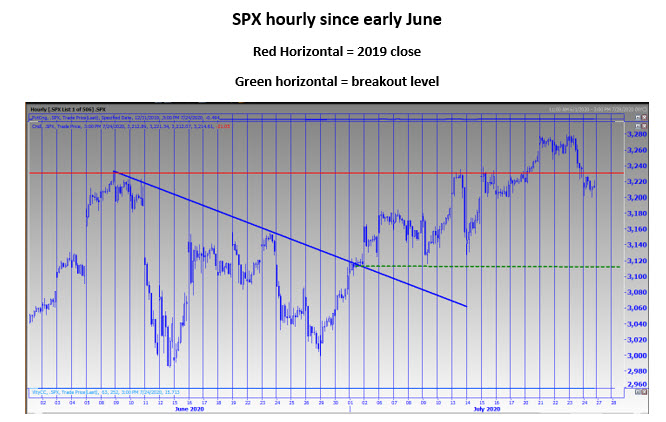 Much was made in the media about the underperformance of technology stocks two weeks ago, and this was followed by another pullback last week on the heels of big earnings-related declines from Microsoft (MSFT), Snap (SNAP), Tesla (TSLA) and Intel (INTC). But a daily chart that caught my eye is (so far) suggesting that technology investors should not yet panic.

For example, note the importance of the NDX’s 30-day moving average since late 2019.  It has served as support during rallies, with crosses below and above signaling short-term selling and buying opportunities, respectively. Friday morning’s low occurred at this moving average, suggesting technology buyers should not panic yet. 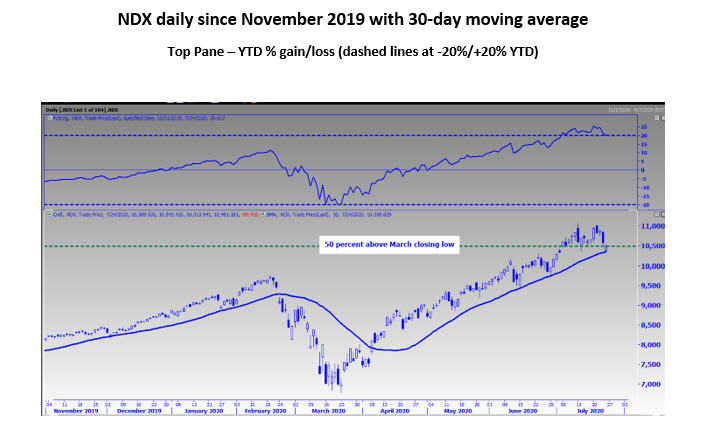 Coincidentally, the NDX pulled back last week to a level that is 20% above the 2019 close. Note that the March bottom occurred at 20% below last year’s close. Finally, the 10,500 level is 50% above this year’s closing low. In other words, after a pullback from the 11,000-millennium level last week, the 10,500 area is a potential level from which technology stocks could regain leadership that has been lost during the past two weeks.  Should this sector fail to regain leadership, and the NDX experience a solid close below the 10,500 area, this could be the technical signal that creates the unwind in the current historical enthusiasm we are seeing among short-term market participants. The jury is out on whether selling is contained to tech only amid a continued rotation into other groups or a broader market sell signal.

A couple other trading notes of interest: 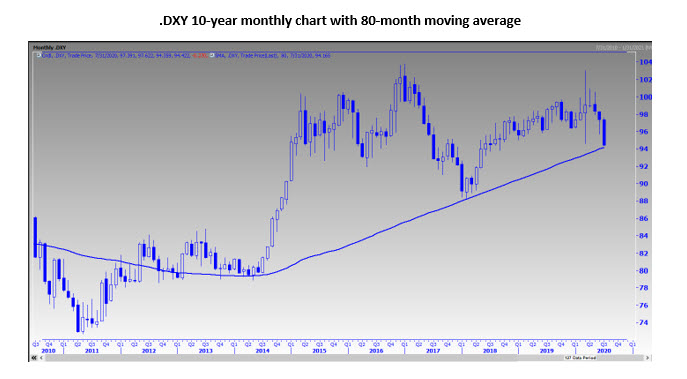