Last year was probably the toughest in recent history on airline stocks. END_OF_DOCUMENT_TOKEN_TO_BE_REPLACED

GameStop (NYSE:GME) is up 85% over the past month through June 8. END_OF_DOCUMENT_TOKEN_TO_BE_REPLACED

If This Is a Tech Bubble in Stocks, It’s the Expansionary Phase

Say what you want about the technology earnings season. The beat rate was down, Intel and Alphabet took lumps, and chipmakers failed to quiet critics. What you can’t say is that the industry’s stocks are suffering, up 33 percent in four months with another huge day just recorded.

Now the Nasdaq 100 has risen an unprecedented 18 times in 19 weeks.

Is this the tech bubble part two? It’s fair to ask, given how big that index is getting versus the rest of the market. At about 36 percent of the S&P 500, it’s creeping up on 1999-style dominance. Arguing against the comparison is the share of overall earnings its companies generate. Going by the quarter they just reported, it’s four times as much as 20 years ago.

That’s a hazard with training too close a lens on the sector’s day-to-day missteps. Sure, Facebook is at war with regulators and Google’s advertising shortfall left analysts baffled. Take a step back, and mainly what you see is the gaping moat of profitability -- including almost $90 billion in the first quarter -- that the Fangs and their brethren maintain.

“Companies that have stood the test of time have been able to adapt and as a result justify the stock price increases that we’ve seen because they’ve got great earnings,” said Kevin Walkush, portfolio manager at Jensen Investment Management. “With durability, growth and scale, that drives profits.”

Bubble or not, investors refuse to fall out of love with tech. With $2 trillion added since Christmas, the Nasdaq 100 has a shot at beating the market for the 10th time in 11 years. Only three American companies have ever been valued at $1 trillion and they’re all in the index: Microsoft, Apple and Amazon.com.

Against that backdrop came earnings season, the quarterly ritual in which investors get to see if the profit engine is running hot enough to support valuations. And while what they saw gave them pause -- earnings aren’t going up at the moment -- the Nasdaq’s mammoth rally remains largely intact.

Doug Ramsey, Leuthold Group’s chief investment officer, has likened the persistent affection for tech stocks to the 1990s internet frenzy. In a note published in early April, he warned investors to watch out for the risk of crowded stocks unwinding should everyone start to exit at the same time. 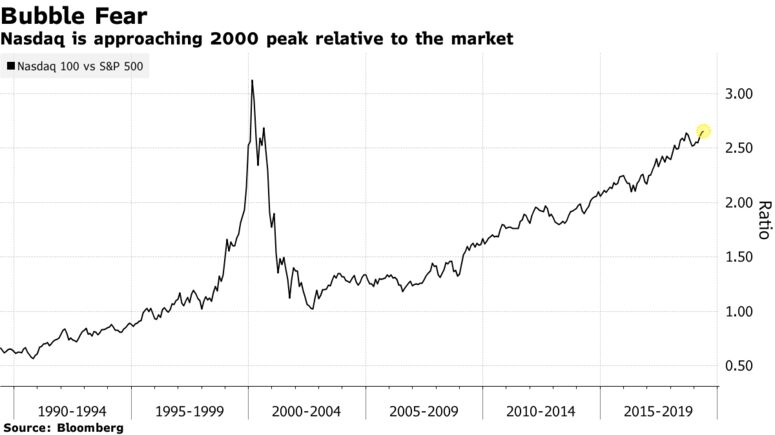 The naysayers have their points. Four weeks into reporting season, tech profits are poised to fall 6.8 percent in the January-March period, on course for the worst quarter since 2009. Growth is deteriorating as products such as smartphones have entered a maturing phase and parts makers like semiconductor companies have seen weak demand from a range of end markets including data centers.

Companies delivered against those subdued expectations, though by a little less than they usually do. Among tech companies that reported, earnings have beaten estimates by 6 percent, below the average of 6.5 percent over the past two years. The scorecard on sales is worse, with the beat margin reaching 0.5 percent, versus 1.5 percent historically.

Investors responded with a yawn. With results from five of the largest U.S. companies in, Alphabet was the only one to see its stock fall the next day. The Nasdaq 100 ended the week higher by 0.2 percent, capping it with a Friday flourish of 1.6 percent.

Altogether, Nasdaq 100 companies earned more than $460 billion in profits last year, a 9-fold increase from the peak year of the internet bubble. As fast as they’ve been, share-price gains during the stretch are much slower: 66 percent from its March 2000 high.

So while companies like Microsoft have needed two decades to restore their share losses following the crash, the industry itself never really stopped expanding. Innovations such as mobile phones and cloud technology have not only revived legacy companies such as Apple and Microsoft, but also ushered in new giants like Facebook and Alphabet.

At 36 percent, Nasdaq’s market value as a percentage of the S&P 500’s still sits above its relative profit share of 29 percent, indicating a higher price-earnings multiple. But the gap is a far cry from that seen 20 years ago: 44 percent for market cap and 7 percent for income.

“The U.S. economy has changed and there’s more investment in technology,” said Jason Benowitz, senior portfolio manager with Roosevelt Investment Group. “The technology companies are at a premium to the market but they grow faster and they have higher returns on capital. It doesn’t seem like valuation ought to hold this group back at present.”