We witnessed the tale of two markets in 2020.The market experienced a END_OF_DOCUMENT_TOKEN_TO_BE_REPLACED

END_OF_DOCUMENT_TOKEN_TO_BE_REPLACED

Every year in January and early February, the NFL playoffs run their END_OF_DOCUMENT_TOKEN_TO_BE_REPLACED

Hyliion Stock Could Deliver Electrifying Profits By the Truckload

As awful as 2020 has been for humankind, it was a great one for the electric vehicle (EV) market. The concept bloomed and investors dollars poured into the theme. An army of special purpose acquisition corporations (SPACs) rushed the field. They brought a slew of EV companies and went public quickly. Some don’t even have any sales. Nikola (NASDAQ:NKLA) stole the headlines recently, but Hyliion (NYSE:HYLN) is one to watch. They offer series 8 trucks with varied technologies. Hyliion stock has had a wild ride to say the least. From here, it’s reasonable to expect better days ahead for patient investors.

Electric trucks could be the way we transport goods in the future. Betting on Hyliion stock is a way to buy into the idea early.

The electric car has been around since the 1880’s. Yet, EVs are still a young concept and this is an even younger company. The pool of potential competitors is deep so buyers beware.

Meanwhile, the internal combustion engine (ICE) still reins supreme. For class 8 trucks, diesel is king and it will be hard to convince professional drivers to switch. That task became a lot easier thanks to the hard work that Tesla (NASDAQ:TSLA) has done. They plowed against all kinds of tests until they became legit. The concept of electric vehicles is now tangible for almost everyone on the planet. It’s similar to what Toyota (NYSE:TM) did with the Prius. Until that breakthrough, the hybrid concept was mainly a few funny looking cars that no one wanted.

If You Show Them the Money They Will Come

The next step is to make the math work. Truck drivers will switch when they have the evidence of lower costs. Saving the planet is great, but it’s even better when they can profit doing it. The switch away from ICE to EV won’t come as quickly as just the flip of a switch. After all, the globe still produces 90 million fossil fuel vehicles versus 2 million electrified. But therein lies the upside opportunity for the concept. Hyliion specializes in class 8 trucks, so its share is somewhat of a niche. But unlike many EV startups, they actually do have current products. This is thanks to their approach of side by side lines of trucks.

They currently deliver two versions of hybrid models. The idea is to still use the diesel motors but retrofit axle to use electric power. It’s like taking baby steps before jumping in with both feet. The fully electric model is available for pre-order with a $5,000 deposit. Meanwhile, the cost of the hybrid adaptation is reasonable enough to make it an attractive proposition for truck drivers now.

Don’t Blink or You’ll Miss Out On Hyliion Stock

Hyliion stock moves really fast in both directions. In June, it rallied 250% in days only to crash back down to earth giving up most of it. Then from the base of $18 per share, it rallied another 220% after the earnings. Unfortunately again the stock collapsed back to the start. It is currently building another stint from the same base, and into resistance near $30 per share. Although the buyers have control for now, they cannot afford to lose that $18 floor. If they do, then it’s likely going back down to single digits.

These comments are purely technical and suggest nothing bad about the company’s prospects long-term. Owning these shares long term makes sense as a bet on EVs. But you should expect resistance. Meanwhile, markets remain bullish so the fans of Hyliion stock can repair the recent technical damage.

Extreme moves are wrong in either direction. The fast rally to $60 should have unfolded more moderately. Just like they overreacted on their way up, they overreacted on the way down. In reality, somewhere in the middle lies the truth. Reverting to the mean in this case will probably bring the stock back to $37.50 per share. Investors who believe in it for the long-term should just own it regardless. 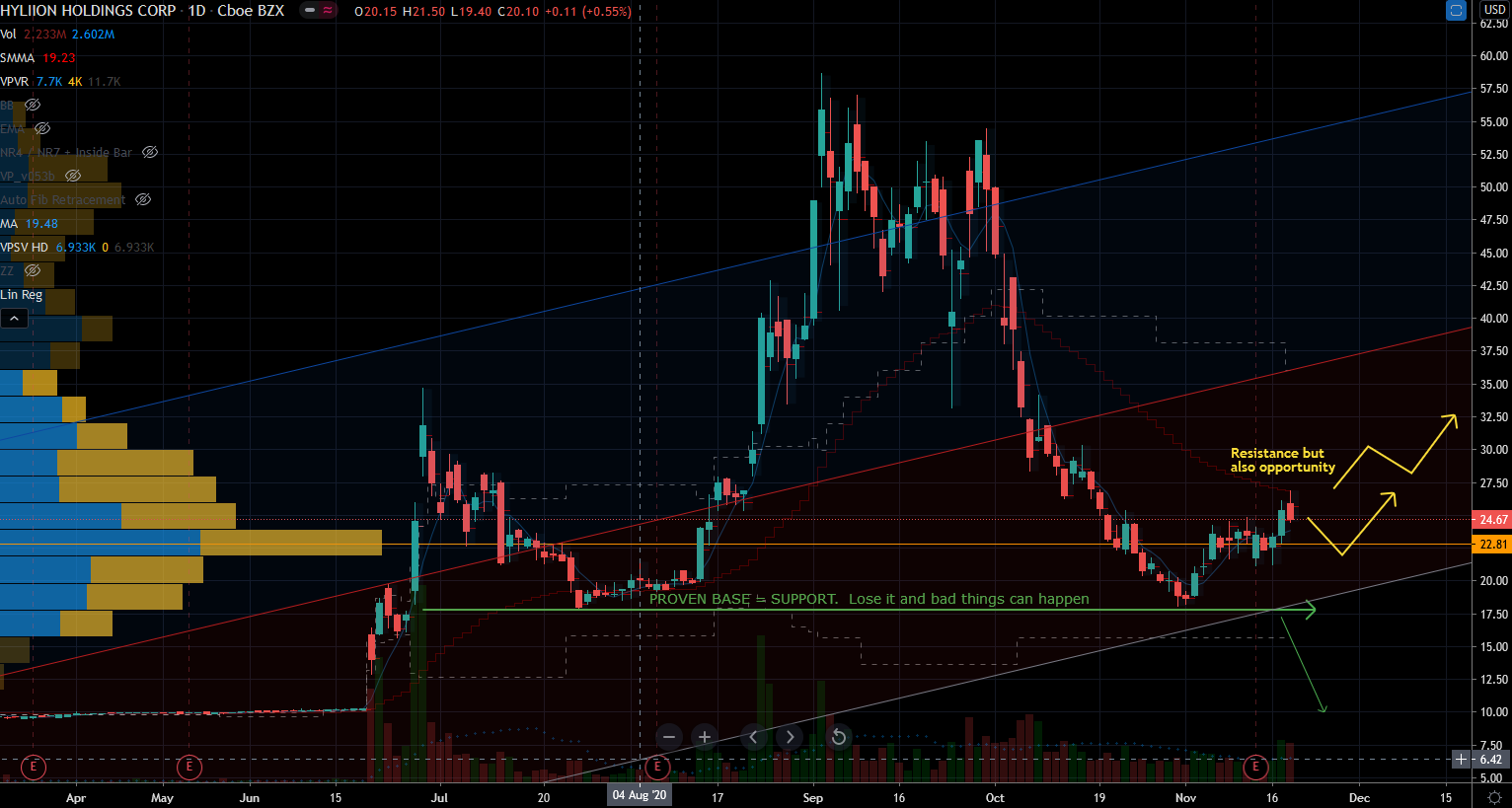 In this case, I like to substitute buying shares with selling puts. Instead of risking $25,000 right here to buy 1,000 share with no buffer, I use options. There, I sell 10 contracts of the Jan $17.5 HYLN puts. For that I collect $2,000 today and in return, I promise to buy those shares at $17.5. There is no out-of-pocket expense and my only risk is buying shares 30% cheaper. If successful, I would have generated 8% in yield in two months and out of thin air.

If the worst case scenario happens and Hyliion stock collapses below my put, I break even at $15.50. Somebody who bought the stock outright at the same time I sold my puts would have lost 35% already. This is a strategy that is only okay to use if the investor is willing to buy the shares. Hyliion is still a speculative bet on future concepts. The company seems legit and the trucks are slick. They face stiff competition, including Tesla, but there should be enough room for everybody to prosper.

These are risky stocks, so size matters. I don’t take big bites at first, and I don’t average down because zero is always a possibility. This is not Apple (NASDAQ:TSLA) or Tesla. EV stocks are still speculative and they tend to trade in unison. Even though Hyliion might have a good concept, its stock could fall if the SPAC trade falls out of favor. If you remember that’s what happened to cannabis stocks in 2018. They were the hottest trade then until they fell out of favor. Stocks like Canopy Growth (NYSE:CGC) and Aphria (NASDAQ:APHA) took a beating. It took them two years to revert to trading on their own merit.

I want to leave this write up on a good note. I like Hyliion stock, so I condone owning HYLN shares for the long term.