How Stocks Performed During The Past 6 Recessions

Stock markets have been gyrating wildly as the world leaders’ close massive portions of the global economy in response to COVID-19. It’s safe to say that a global recession has begun, and that the U.S. is also in a recession. Moreover, fear has risen as investors attempt to understand what this could mean to their portfolios. Could stocks lose as much as they did in 2008? It’s quite possible. What can we learn from past recessions to help this time? Plenty. To address these issues, we will examine stock performance during the past six U.S. recessions, beginning in the mid-70s.

A note on the graphs below: Recessions are shaded grey, the Dow Jones Industrial Average is used for stocks, and dividends are excluded.

This recession brought the worst economic contraction since The Great Depression. Precipitated by a housing bubble which burst, U.S. stocks were only 2.7% overvalued when it began. Nonetheless, stocks proceeded to sink, ultimately losing 53.78% from peak to trough. By the time it ended, stocks had recouped about 14% of the loss, ending the recession down 40% from its October 9, 2007 peak (A-1). 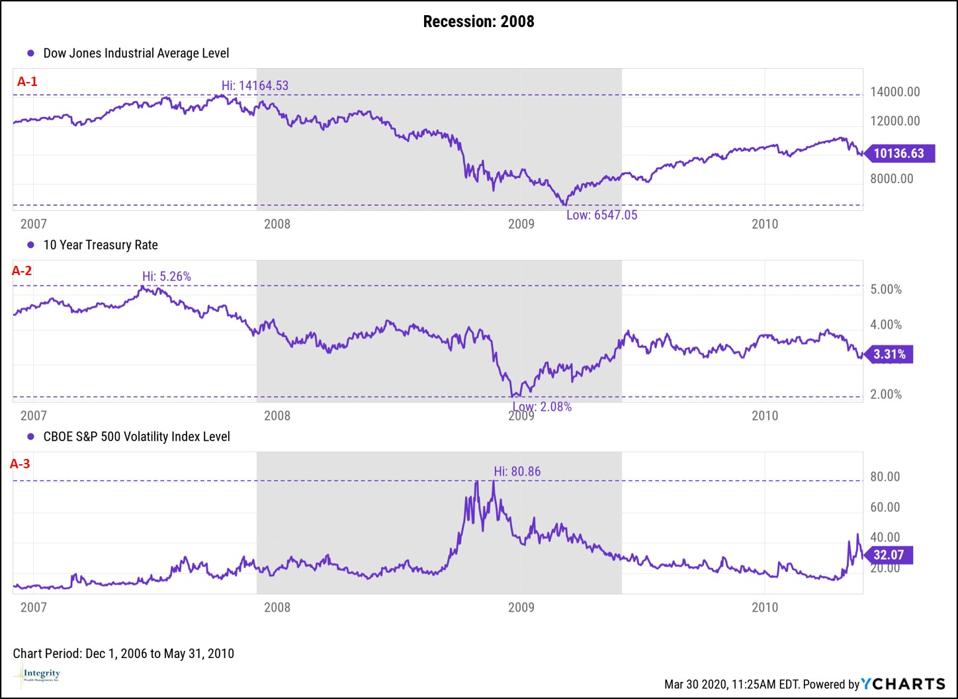 This recession was relatively mild. It began 13 months after the tech bubble burst and lasted eight months. It was worsened by the 911 tragedy which occurred six weeks before the recession ended.

Although the VIX spiked to 43.74% during this recession, it rose even higher after it ended (B-3). The 10-year Treasury also fell slightly (B-2). 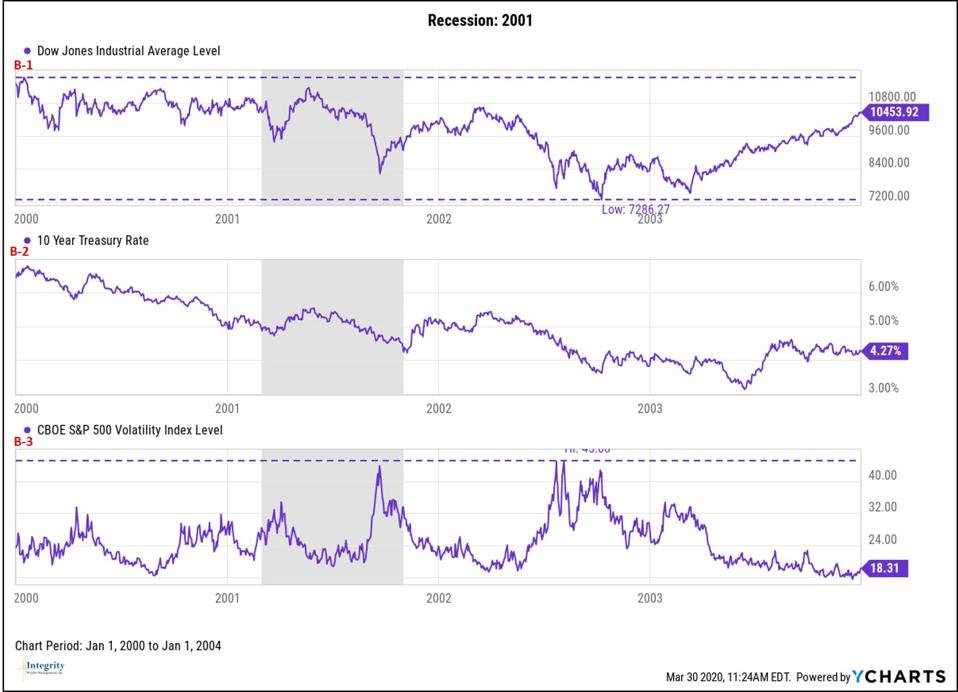 The 1990 recession lasted the same length of time as the 2001 recession but was more severe. Stocks trended higher in the eight years prior and peaked two weeks after the recession began. Early in the recession, stock declined, losing 26% until bottoming October 11, 1990 (C-1). During this decade, stock markets soared until the tech bubble burst in March 2000. 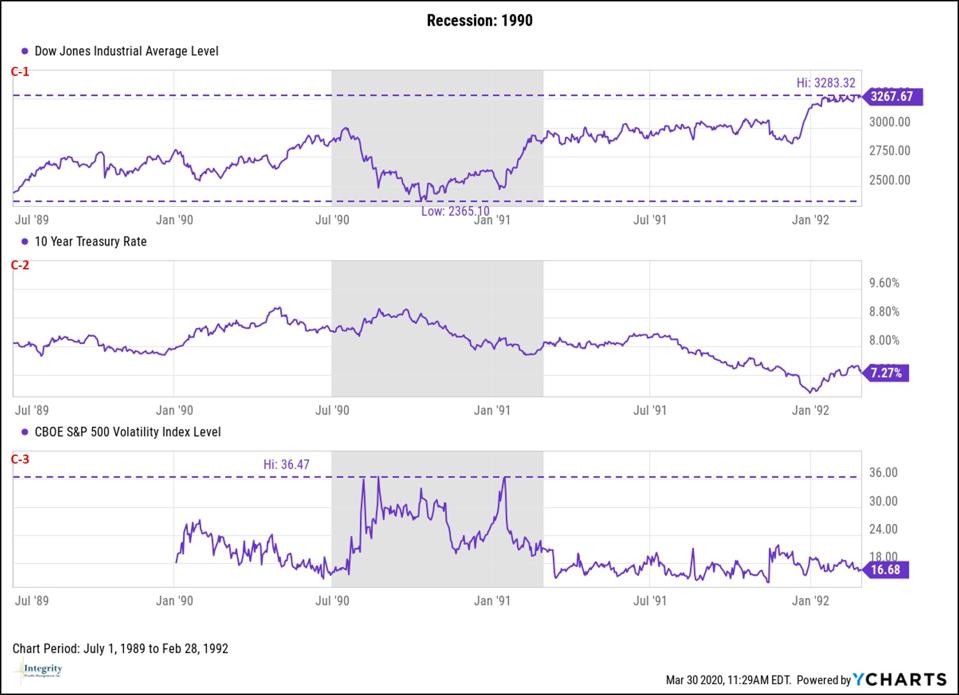 The early 1980s saw two recessions. During the first, stocks fell a little more than 8.0% (D-1). In the second, stocks lost slightly over 23% (D-1). Once Fed Chair Volker tamed inflation, stocks soared, and the boom was back. In each case, the 10-year Treasury yield fell during the recession (D-2). 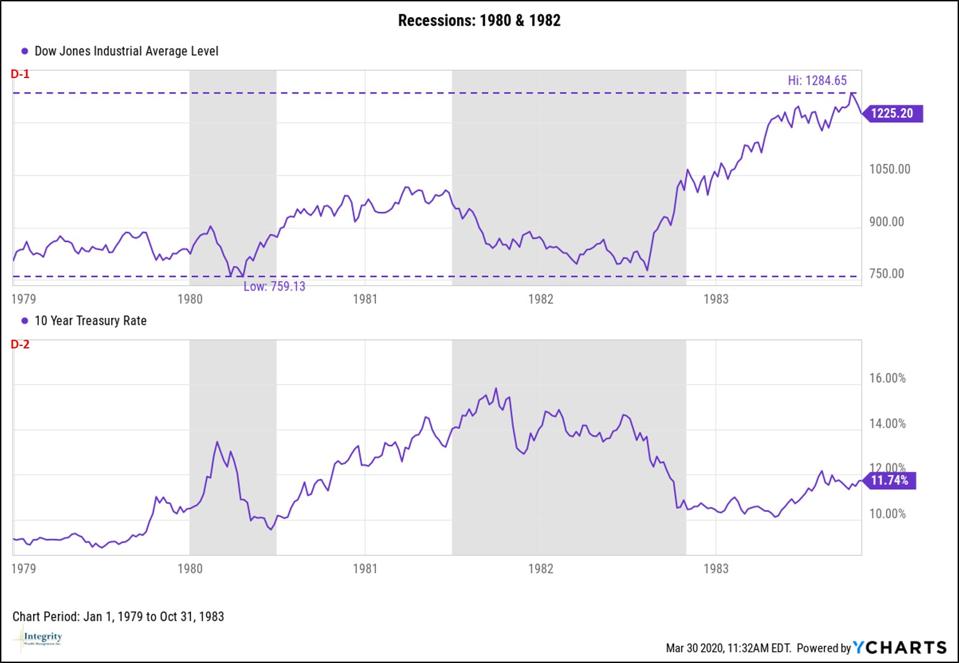 This recession was one of the longest. Sparked by the OPEC embargo against the U.S., it was also one of the worst for stocks. Stocks lost about 43% from the start of the recession to the bottom and dropped 49% if you begin January 11 that year. 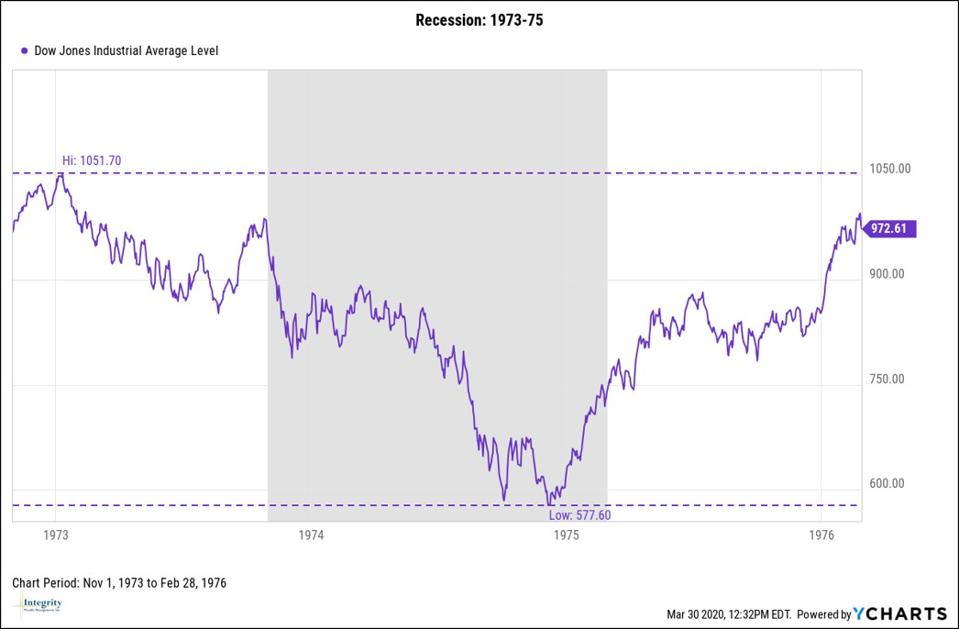 What lessons can we learn from past recessions?

·        Stocks always decline during a recession.

·        The degree to which stocks fall during a recession is affected by how long it lasts, its severity, and the valuation of stocks when it begins.

·        Some of the best days in the stock market occur during a bear market.

How bad could it get this time? Stock performance is closely tied to corporate earnings, which is tied to economic activity. In the present case, economic activity will be worse than anything we’ve seen in our lifetime. Thus, stocks may fall as much or more than they did during the 2008 recession. While no one has a crystal ball, given the global and U.S. economic shutdown, we could see the worst period since the 1930s.