Hotel REITs: Opportunity Is Still There

In a period of just two months, we have experienced the end of the longest bull market and a severe bear market followed by yet another bull market.

I think it is safe to assume that almost nobody expected such a roller coaster going into 2020. Before the outbreak of COVID-19, the consensus indicated for an elevated risk of having a notable economic slowdown either at the end of 2020 or beginning 2021. Plus, there was this notion of recency bias that many prominent analysts kept referring to in order to make a case for relatively minor stock market drawdown in case of some shock in the economy. The idea was that the consensus is falsely assigning too high probability for such a severe event as in GFC because we people tend to associate some things (e.g. the nature of bear market) with our most recent experiences/memories.

Well, we all know what happened... 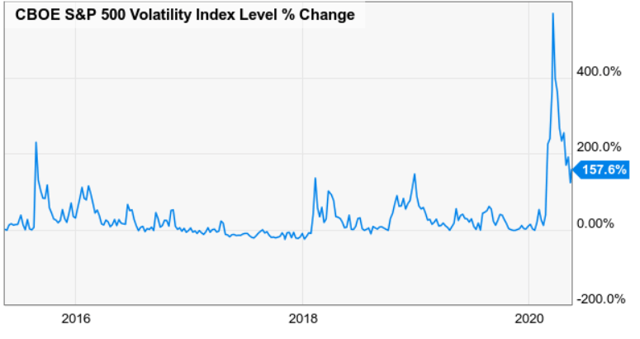 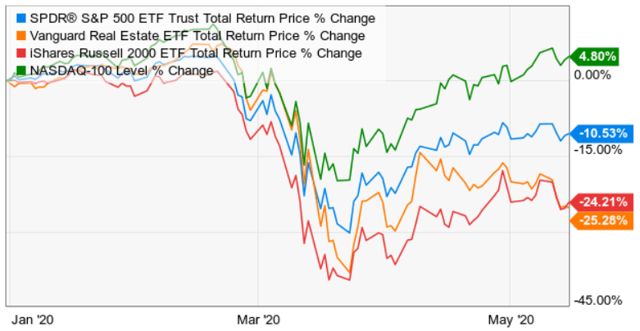 In the chart above, we can see that almost all equities have responded in a synchronized manner - both to the downside as well as to the upside.

However, there are two important deviations which are worth highlighting:

Now, we all are familiar with the famous quote from Warren Buffet:

So, if we put our contrarian investor hats on, real estate is one of the first candidates for profitable bets. This is a perfect opportunity to finally look at ourselves and answer whether we have the guts to actually be a contrarian or all the talks during the bull run were just a theoretical exercise.

Now, as you know, Vanguard Real Estate ETF (VNQ), which tracks the overall real estate market, consists of many sectors. There are sectors, which have already recovered and/or exhibit modest volatility since the COVID-19. Data centers, warehouses, and some constituents in the specialty sector have performed relatively well.

Nevertheless, there are some sectors, which have lagged behind and thus, per definition, offer still a chance for a huge upside. According to NAREIT April data, hotel REITs were the worst-performing asset class (even worse than for malls) - losing on average 60% of the market cap. 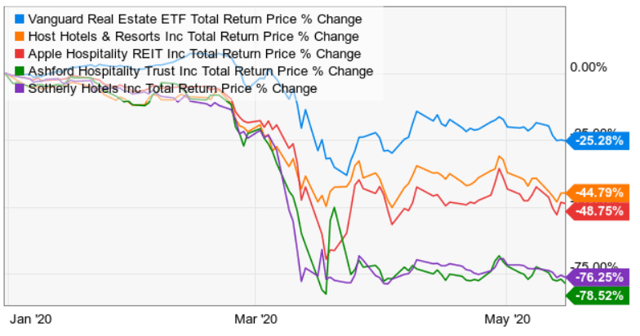 In the chart above, you can see how the share price (including dividends) of the two largest hotel REITs - Host Hotels & Resorts (HST) and Apple Hospitality REIT (APLE) - have moved since the beginning of the year. 50% decline...

To introduce another important aspect, have a look at the table below: 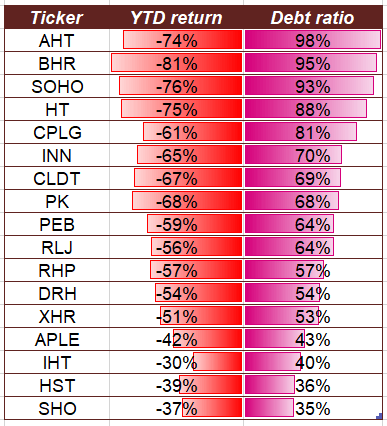 The key takeaway here is that the more leveraged the company is (i.e. high debt ratio), the more severe decline it has experienced.

All this makes sense that (a) smaller cap REITs have exhibited relatively higher declines; (b) more indebted REITs have significantly underperformed peers with healthier balance sheets; and (c) hotel REITs, in general, have been taken to the woodshed. The last point becomes quite understandable in the context of the following facts (which I outlined in my most recent article on Sunstone Hotel Investors):

Shock to travel (including hotel) industry 9 times worse than 9/11. Eight out of 10 hotel rooms were empty in April. 2020 is projected to be the worst year ever for hotel occupancy rates - worst than in 1933. Around 70% of hotel employees have been laid off or furloughed so far.

So, to get an exposure to potentially very attractive returns that would be driven by some mean reversion or the economy returning back to a state of normalcy, you have to pick hotel REITs with relatively small market cap and high leverage.

However, to respect the risk side of the equation and limit the probability of suffering permanent capital losses, there are three critical prerequisites to consider before initiating a position here.

All these three items above are critical to understand. You have to be really on top of them and factor into your expectations when making bets on hotel REITs now. This will help you avoid a permanent loss to your capital via e.g. massive equity dilution and permanently subdued performance due to significantly deteriorated competitive advantage.

Finally, here you can have a look at how this approach looks like in practice.