The meme stock rally has taken off in recent weeks. Shares of END_OF_DOCUMENT_TOKEN_TO_BE_REPLACED

Here Is How to Play Disney Stock

Walt Disney (DIS) may have beat earnings and revenue expectations, but that doesn't mean the stock is going to rally.

This was a solid quarter from a great company at the technological turning point of cord-cutting and streaming. Disney is a monster and it will be a big winner over the long term. But why is it not rallying on this report?

Simple. The stock ran too much ahead of the report in anticipation of good results -- and due to all of Disney's recent catalysts -- and as such, the news was already priced in. That said, the stock closed lower by just 1.04% to $133.59 in Thursday's trading session. It's actually outperforming the broader market on a tough day.

So what should investors do from here? 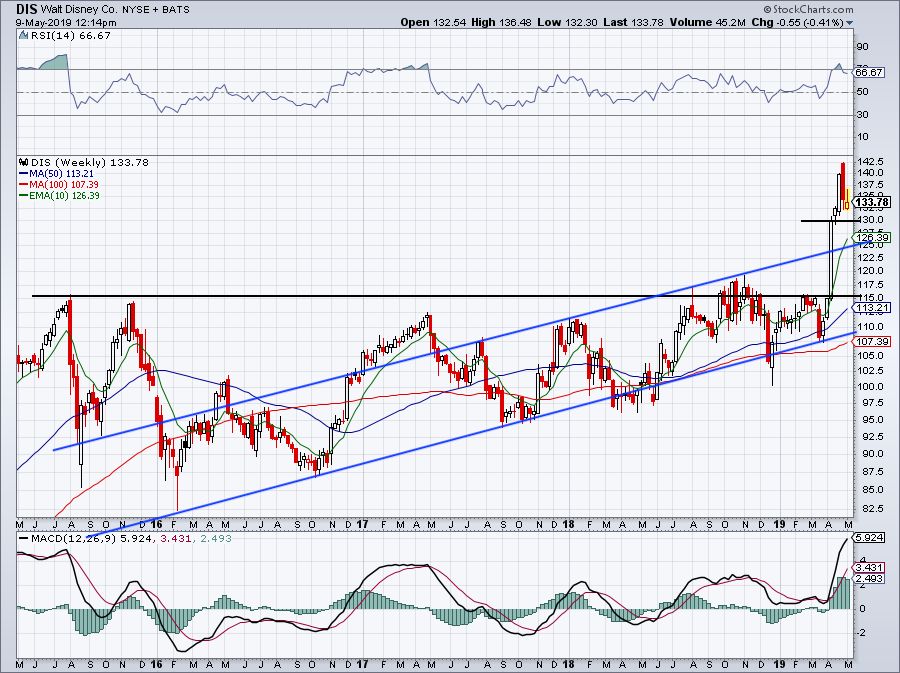 Last month, Disney stock ripped higher, bursting through several multi-year resistance levels. That paved the way for a run up to $142.50, where Disney topped out in late April after positive news on the robust start that "Avengers: Endgame" is having in theaters. It's noteworthy that the film is on a historical run.

In any case though, those excellent sales numbers and Disney's recent earnings results have been accounted for. At least on a short-term basis. We now need to see if Disney stock continues its recent run of momentum or if shares start to peter out in the short term. If bulls are lucky, it will be latter.

That may sound counter-intuitive, but we need to remember that Disney stock has run a long way -- rallying more than 32% inside of a month -- and consolidating those gains would actually be the healthiest price action for more long-term gains. How it consolidates is the question, though. A consolidation phase happens in two forms, either through time or through price. If it's the former, Disney stock will simply chop in a sideways range until bulls are ready to push it higher. If it consolidates through price, DIS stock will need to pullback before attracting more buyers.

If it consolidates over $130, bulls may use this time to accumulate the name. Below and it opens the door to the $125 area. At $124.50, Disney has its 38.2% Fibonacci retracement for its 52-week range. Keep in mind though this is now a strong stock and has its trend moving higher as well. Specifically, the backside of prior uptrend resistance could provide a lift, as could its rising 10-week moving average.