The meme stock rally has taken off in recent weeks. Shares of END_OF_DOCUMENT_TOKEN_TO_BE_REPLACED

Healthcare Stocks Could Rebound After Their Worst Week Of The Year

Health-care stocks fell sharply last week, notching their worst weekly performance of the year, but a rebound may be at hand.

The S&P 500 health-care sector fell 4.4% last week, its worst weekly decline since late December. The move ended with more than 93% of health-care stocks trading below their 20-day moving averages, a short-term technical indicator, according to Andrew Thrasher of Thrasher Analytics.

Health care’s sharp drop comes as investors worry that left-leaning policy ideas such as universal health coverage are gaining support, which could hinder corporate profits for companies in the space.

“Because this latest move was largely caused by political hot air (so to speak) and not something structural within the sector, I think we could see a bounce back in some of these names,” Thrasher said in a note to clients. “I believe the stocks have been over-extended to the downside.”

The move down began Tuesday after presidential hopeful Sen. Bernie Sanders received a positive response to his “Medicare for All” plan at a town hall organized by Fox News.

“What we’re talking about is stability. That when you have a Medicare for all, it is there now and it will be there in the future,” Sanders said at the town hall, which aired last Monday. The plan creates a single-payer health-care system run by the government, which Sanders argues would be more affordable for consumers.

Worries increased after UnitedHealth CEO David Wichmann warned Tuesday that such policies would “destabilize the nation’s health system. ” That comment sent UnitedHealth shares down 4% and the health-care sector down 2%.

Health care is by far the worst-performing sector this year. It is down 1.2% in 2019 and is the only one trading in negative territory. By comparison, utilities is the second-worst performer of 2019 and it is up about 8%.

The group was down fractionally in afternoon trading Monday. 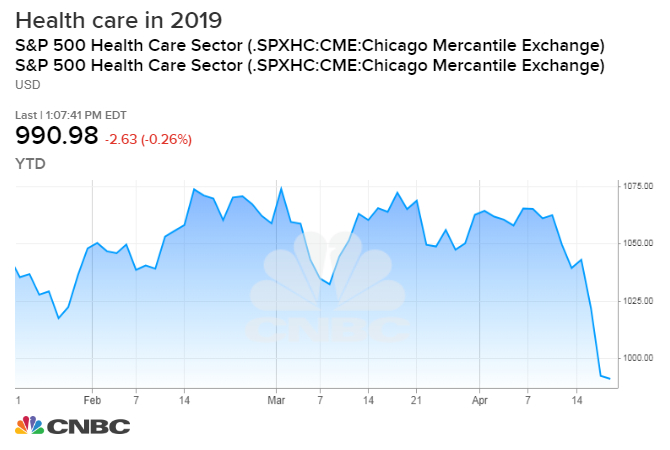 Biogen, Cigna and Abiomed are the worst-performing stocks in the sector, falling at least 20%. CVS Health is also down nearly 20% year to date.

This is not the first time health-care related stocks have taken a beating amid worries leading up to a presidential election. The iShares Nasdaq Biotechnology ETF (IBB) came under sharp pressure in 2015 after former Secretary of State Hillary Clinton — then the favorite to win the 2016 election — tweeted against drug-price gouging, calling it “outrageous.”

Price gouging like this in the specialty drug market is outrageous. Tomorrow I'll lay out a plan to take it on. -H https://t.co/9Z0Aw7aI6h

The ETF later recovered some of those losses to end the year up more than 11%.

“Ever since Obamacare, it’s been tough on these stocks pre-election season because they make the drug companies out to be the bad guys,” said Maris Ogg, president at Tower Bridge Advisors. Ogg added the current pullback in health care “probably won’t last because, at some point, earnings will overtake fears. But I do think we’ll hear a lot of health care bashing.”

Only a handful of health-care companies have posted first-quarter earnings results, but the sector is outperforming all others. The sector’s blended earnings growth — which takes into account the expected earnings growth and reported growth rates — through Monday morning is 4.7%, according to FactSet.

Robert Pavlik, chief investment strategist at SlateStone Wealth, said last week’s drop in health care is a buying opportunity, but it will be a bumpy ride higher for investors as political rhetoric around health care will keep growing.

“There’s probably some more downside near term,” he said. “With that kind of talk permeating the landscape, you can only imagine that — even though you think these are great long-term companies — there’s probably going to be some weak hands that are not going to be able to withstand that talk.”