Gold Stocks With Recent Insider Buying And Selling (May Update)

Here's another update on insider buying and selling in the precious metals markets.

If you are unfamiliar with these updates, I like to provide regular coverage of insider buying and selling. This refers to when insiders of a company - such as CEOs, board members, or major shareholders - purchase shares of company stock on the public market or via private placement.

Insider buying could mean that the insider making the purchase is bullish on the company's stock: they believe it is undervalued or mispriced and will rise. Insider selling can happen for multiple reasons and isn't always a bad sign.

While insider buying has cooled off a bit with gold prices and company stock prices rising quite a bit since late-March, there has still been some noteworthy insider trading activity lately.

Here's a look at recent activity. Images are courtesy for CanadianInsider.com. Each green dot indicates an insider purchase and red dots indicate an insider sale. Transactions are also available for viewing on SEDAR, the electronic system for filing documents in Canada. 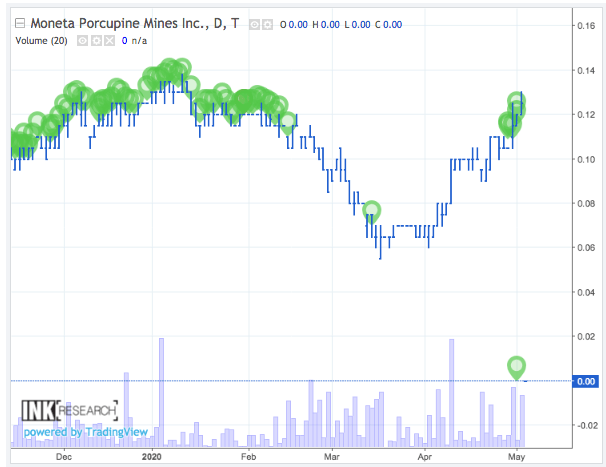 Moneta is a small junior gold exploration company which holds a 100% interest in 6 core gold projects and a 50% JV with Kirkland Lake Gold in the Abitibi Greenstone belt in Ontario.

The company owns the Golden Highway project, which contains a resource base of 556,500 ounces of indicated gold and 1.174 million ounces inferred at grades north of 4 g/t.

- Director Josef Vejvoda, portfolio manager of the K2 Principal Fund, has been an active buyer of shares in the public market dating back to last year. In April and May, Vejvoda's fund added 136,000 shares of stock at prices ranging from C$0.109-0.115. Vejvoda's fund now holds over 31.18 million shares, according to filings.

- Other insiders own approximately 9% of the company, according to Moneta's corporate presentation.

This insider buying news is positive but readers should know that the K2 Principal Fund is a large fund with over $1 billion in managed assets, and the Moneta position is very small compared to its other holdings. So, take these purchases with a grain of salt.

Moneta is also a tiny company with a market cap of less than $50 million and it produces no cash flow from operations, so invest at your own risk. 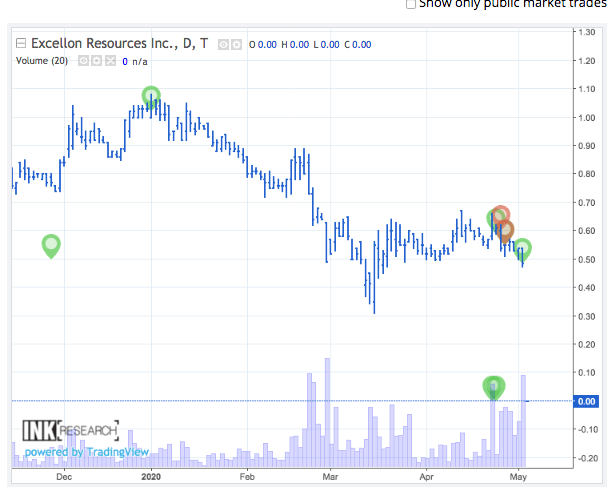 Excellon Resources owns the Platosa silver mine in Mexico, which has been producing since 2005, as well as the Kilgore project in Idaho and other projects.

In Q1, Excellon reported that it produced 523,742 silver equivalent ounces, with a 14% rise in silver output to 296,281 ounces, and a 37% increase in lead production to 1.9 million pounds, while zinc output fell slightly to 2.1 million pounds.

However, Excellon has been impacted by COVID-19 in Q2, as the Mexican government ordered a suspension of non-essential activities in April (which has since been extended until May 30).

- On the bright side, director Roger Norwich has maintained his position of 2.145 million shares, and other insiders continue to hold significant positions.

Like Moneta, Excellon is a very small company with a market cap of around $50 million, and its production has been negatively impacted by the coronavirus outbreak, so be aware of these risks. 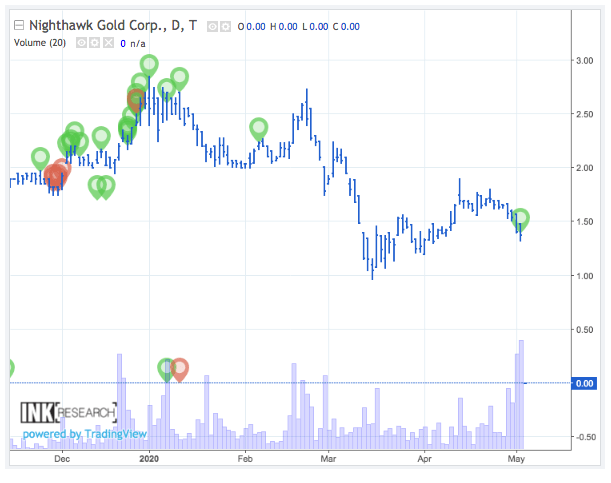 A couple of Nighthawk Gold insiders purchased shares this year.

As you can see, these are rather small purchases of about C$10K each. However, insiders of Nighthawk continue to hold large positions in the company, and insiders own approximately 5% of the company.

Other major insiders include miner Kinross Gold (KGC), which owns 9.9% and Osisko Gold Royalties (OR), which owns 8.6%, according to Nighthawk's corporate presentation.

Readers should keep in mind that while Nighthawk is advancing a large gold project of 2.6 million ounces of gold, these resources are classified as "inferred" which is the lowest level of geological knowledge and confidence. 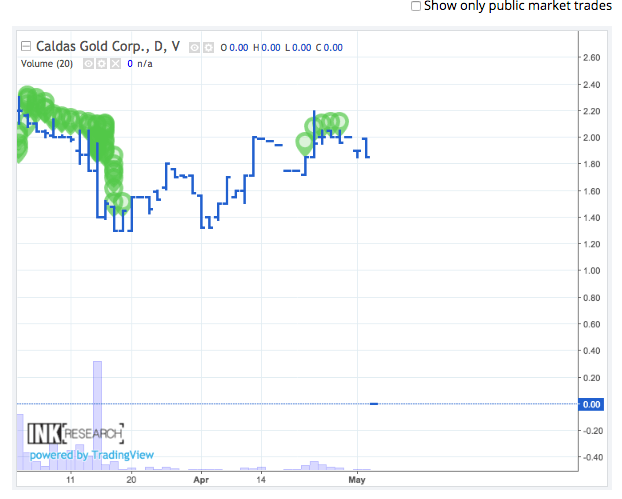 Caldas Gold is a junior mining company currently advancing a prefeasibility study for a major expansion and modernization of its underground mining operations in the Deeps Zone at Marmato Project in Colombia.

- Gran Colombia made a flurry of share purchases in the public market in March. The company bought 1.25 million shares at prices between C$1.40 and C$2.18. Gran Colombia now owns 74.9% of the company.

Caldas Gold is a brand new company and so it has an unproven track record; the company has also been impacted by coronavirus, operating at a reduced production rate at the Marmato mine due to the number of available workers at its operations. 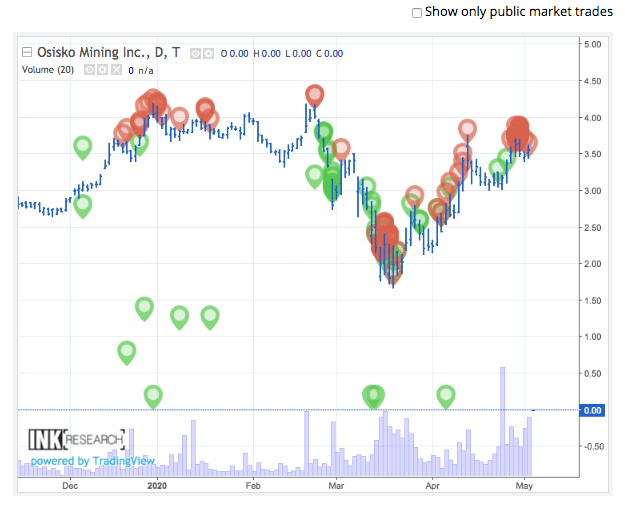 Osisko Mining is a billion-dollar gold explorer focusing on the multi-million ounce Windfall project in Quebec. Windfall is shaping up to be a massive discovery that has more than doubled in size over the past few years to over 5 million ounces in all resource categories. Plus, it's located in one of the best mining jurisdictions in the world. 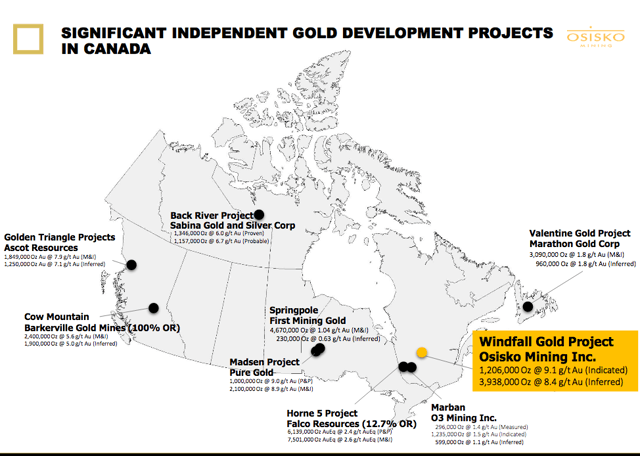 Based on the results of a preliminary economic assessment in 2018, Windfall carries a base-case net present value of C$413 million, with pre-production capex of C$397 million.

However, that value is based on a US$1,300 gold price and it only assumes 1.915 million ounces of gold is recovered. The study has become outdated, and a feasibility study is in progress. The project is likely at least 18-24 months away from producing gold.

Despite rising gold prices, one Osisko Mining insider, in particular, has been dumping shares lately:

- Jose Vizquerra indirectly sold 2.09 million shares in April, bringing the total shareholders down to 3.249 million. Vizquerra is a director of Osisko Mining and also serves as president and CEO of O3 Mining.

Osisko has exploration upside, but the main risk with this junior is it's likely years away from producing any gold. I will keep a close eye on Osisko Mining and will provide coverage of its upcoming feasibility study. 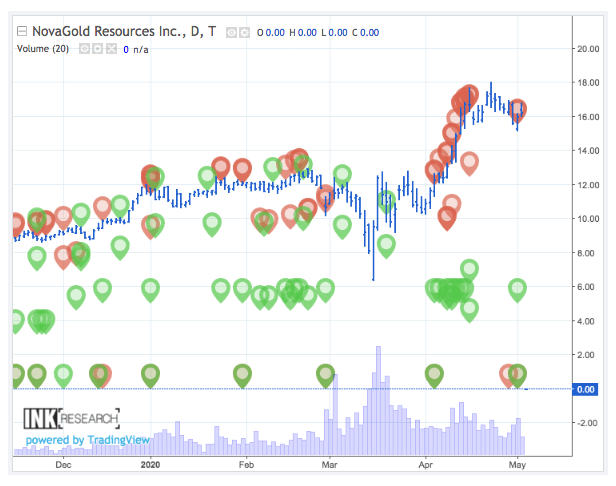 NovaGold owns a 50% interest in the massive Donlin Gold project in Alaska, in a partnership with Barrick Gold. The project contains 39 million ounces of gold resources (at 2.24 g/t), which is more than 5 times the size of its peer group average, according to the company.

Once in production, the mine could produce more than 1 million ounces of gold per year. Key federal and state permits are in place, and just a few additional permits need to be obtained.

Insiders have been selling shares lately and, apparently, have been taking advantage of the recent surge in its stock price. However, it appears that insiders exercised stock options at a much lower stock price before selling off the shares.

- David Ottewell, chief financial officer and vice president, exercised 50,000 options at US$3.85 and later sold the entire stake at US$12.44.

An initial preliminary economic assessment put the price tag on Donlin Gold at around $6 billion. The company is aiming to make this a two-phase project to reduce initial capex but given the sheer size of the project, it's still likely to carry a huge price tag. 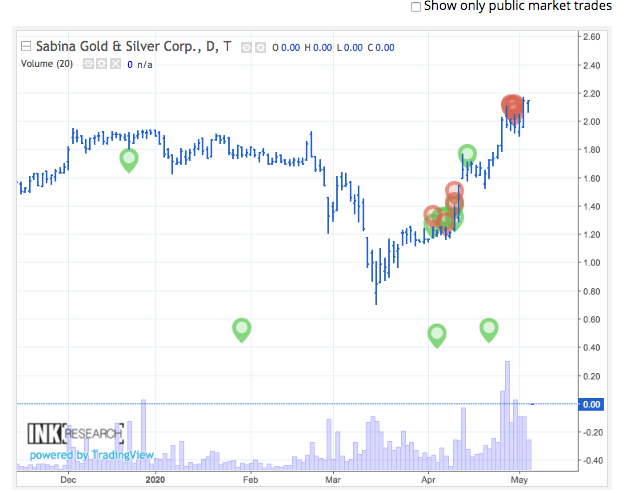 Sabina Gold & Silver is developing the Back River gold project in Canada, which is one of the highest-grade undeveloped open pit projects in the world, as it contains gold grades of 6 g/t. Based on a feasibility study, the project should produce 200,000 ounces of gold per year at $763/oz all-in sustaining costs.

Based on current gold prices, the post-tax net present value of the project is over $1 billion, while upfront capex is likely to cost around $500 million.

One insider has been selling shares recently:

- However, large shareholder Dundee Precious Metals continues to hold 30.5 million shares of Sabina, according to filings.

- Wheaton Precious Metals (WPM) also owns 4.3% of the company, while insiders hold 1.8%, according to its corporate presentation.