Last year was probably the toughest in recent history on airline stocks. END_OF_DOCUMENT_TOKEN_TO_BE_REPLACED

GameStop (NYSE:GME) is up 85% over the past month through June 8. END_OF_DOCUMENT_TOKEN_TO_BE_REPLACED

General Electric: The Deed Is Done

Last year, I made the case that 2019 will be a transformational year for General Electric (GE) and the company’s shareholders. With new leadership at the helm, the conglomerate set out seeking to effectively restructure by realigning its operations, divesting of what does not work or what does not work optimally, and focusing on what it wants to be when it grows up.

Just this week, management finalized yet one more step on the company’s way to a newer, slimmer, healthier entity geared toward generating significant shareholder value in the long run when, on February 25, the company completed the merger of its Transportation segment with Westinghouse Air Brake Technologies Corporation (WAB), also known as Wabtec. For investors receiving some of the proceeds, the question is whether they should hold or cash out. If management’s guidance for the future is in any way credible, the answer is that investors should strongly consider holding.

It’s very important for shareholders to remember that, because of how the deal was structured and the fact that General Electric’s investors will no longer own more than half of the business, that any shares received will be considered a taxable dividend. On a positive note, though, the change to that method will allow the firm to generate extra cash worth nearly $2 billion compared to what the original plan had been.

Another 50.8% of the company will be held by prior Wabtec shareholders, while General Electric as a company will control a further 24.9% of the common stock in Wabtec, plus it will receive a cash payment of $2.9 billion that, when combined with the $21.4 billion the firm will receive in the fourth quarter this year from the sale of its GE BioPharma business to Danaher (DHR), will allow the company to engage in even more debt reduction than what has happened in recent years.

It’s worth mentioning here that General Electric’s ownership over Wabtec will be short-lived. As you can see in the image above, the company will be forced to reduce its ownership over time until it reaches zero. While this may be perplexing to some, and is somewhat disappointing because I believe Wabtec’s industry has hit or is about to hit bottom, the act of selling off ownership will allow the company to generate yet more cash to use toward its restructuring activities.

Nobody knows what the future holds, but if you ask the management team over at Wabtec, the next few years for their products should prove to be very attractive. In the image below, for instance, you can see the expected revenue that Wabtec should realize in each year between now and 2023. All of these financial metrics exclude the Transportation operations that were contributed by General Electric and they assume a nice market recovery for the firm. This also doesn’t assume any of the estimated $250 million in run-rate synergies that should be realized because of the merger by year 4.

In the next image, shown below, you can see what Wabtec’s guidance, based off of General Electric’s original non-public data, should be for General Electric’s Transportation segment over the same period of time. Like the prior Wabtec forecast, this data was given by the firms in joint filings, with an effective date of February 13th of this year. What it illustrates is that, just like Wabtec, General Electric’s Transportation segment should post terrific growth and generate strong cash flow, even stronger than Wabtec itself, as the demand for locomotives recovers.

Speaking of recovery, in a recent investor presentation made for shareholders, Wabtec showed that after General Electric’s Transportation business saw only 272 deliveries in 2018, down from 425 in 2017, we should see a nice recovery, with deliveries expanding at an unspecified double-digit CAGR between now and 2021. Of course, with recent fears of an economic slowdown, it will be interesting to see what transpires, but because orders can sometimes be for years into the future, it’s likely that if we do see a recovery in orders, that even as the economy suffers, we see stronger sales growth for a period of time for Wabtec.

Looking far into the future is great, but for more detailed guidance, we have data for only 2019 as things stand. In the image below, you can see that, pro forma (adjusted for a scenario where the merger would have been completed on the first of this year), Wabtec as a combined company should recognize revenue of $9.2 billion in 2019. On an absolute basis, the company’s earnings per share should be around $3 and $3.20, while adjusted for certain one-time costs, it would be between $4 and $4.20 per share.

At its most generous, this gives us a price/earnings ratio of 18.6 for the firm, which is quite high, but when you factor in the prospect of future growth and the likelihood of this being the bottom of the cycle, it’s only natural for the market to demand a premium today. 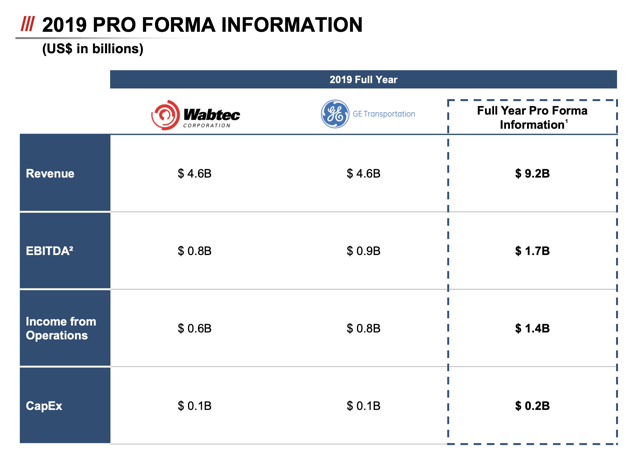 Right now, investors have a decision to make, and it’s probably a tough one: do you stay or do you go? Certainly, this entire endeavor has been rather difficult, especially with management changing its mind halfway through regarding the form the merger would take. That said, the business does look to be doing better on a forward-looking basis than it has been in a while, with thoughts from Wabtec being that the future recovery will result in strong revenue growth and attractive cash flow generation. If this holds true, long-term investors who elected to sell here might look back and regret their decision to divest of the firm.