Our man Jay Powell is talking a little more about raising rates. END_OF_DOCUMENT_TOKEN_TO_BE_REPLACED

Cheap stocks continue to be the land of opportunity for aggressive investors.We END_OF_DOCUMENT_TOKEN_TO_BE_REPLACED

General Electric Stock Is Flirting With a Major Breakout

Shares of General Electric are slowly but surely trading better and better on the long side. Rather quietly now, GE stock has begun flirting with a major breakout and Tuesday's 3.7% rally to $10.42 only helped.

Many people view Honeywell as the best-run industrial company, while some are drawn to 3M for its lofty yet consistent dividend yield of 3.4%. That said, not many investors have been drawn to GE stock.

Of course, that's likely because of the company's laundry list of fundamentals flaws. That's along with the fact that GE has all but eliminated its dividend and has seen its share price crater from ~$30 two years ago to just over $10 now. In late December, investors were worried General Electric stock would drop into the $5 range. Clearly it's been a bumpy ride.

In any regard, the stock has continued to fight its way higher, getting through earnings in January and April, as well as an investor meeting earlier this year. The analysts aren't convinced, particularly JPMorgan's Stephen Tusa.

He continues to criticize the company's free cash flow issues, while maintaining a sell rating and $5 price target. Don't write off Tusa as a stubborn bear, though. He was the first to wave the caution flag on GE stock and even raised his rating from sell to hold in December (before reducing it back down to sell in 2019). It caused a flurry of buying, but after several quarters of operation, he's not convinced the turnaround is taking hold.

That said, the turnaround is taking hold on the charts, with a potential breakout setting up nicely in General Electric stock. 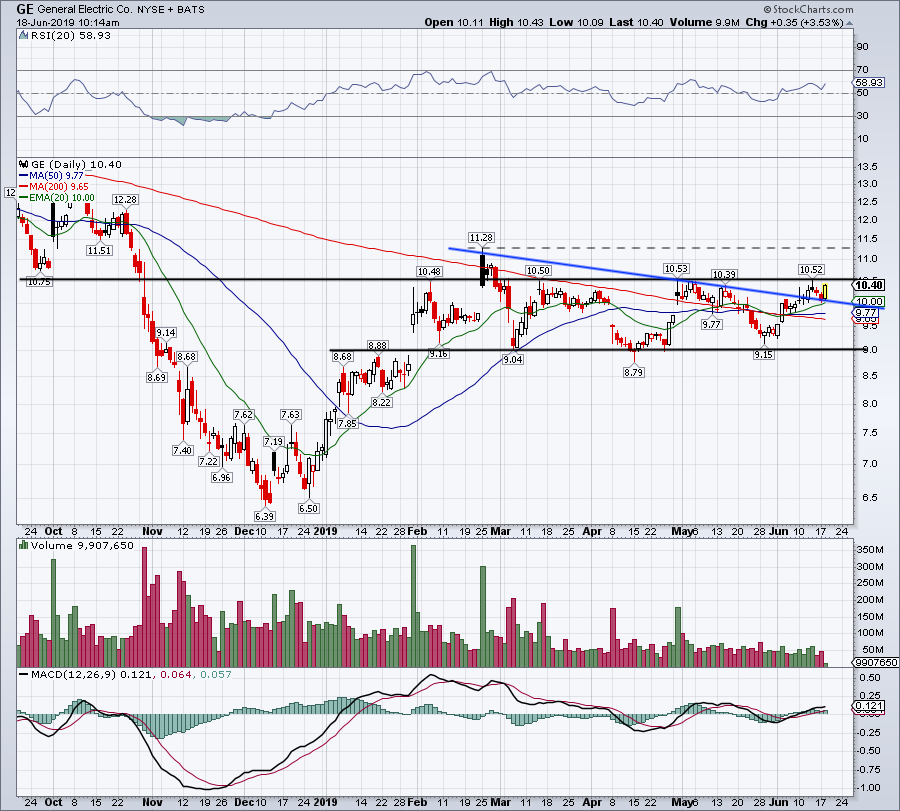 At the start of this month, GE stock found some strong upside momentum. That carried it over all of its major daily moving averages. Last week's rally also put the stock over downtrend resistance (blue line) near $10.

It's left General Electric stock bumping its head on $10.50 resistance. This mark has held the stock in check all year, swatting it lower after each test. For bulls, a break over this level could trigger a much larger move, with the first target being the February highs near $11.25. Over that mark and $12+ is possible.

Should $10.50 continue acting as resistance, investors need to see support hold between $9.65 and $10. The closer to the latter, the better.

The bottom line: Watch $10.50. It will either pave the way to a breakout or act as resistance and send GE stock lower.