Our man Jay Powell is talking a little more about raising rates. END_OF_DOCUMENT_TOKEN_TO_BE_REPLACED

Cheap stocks continue to be the land of opportunity for aggressive investors.We END_OF_DOCUMENT_TOKEN_TO_BE_REPLACED

Gap stock got hammered on Friday, with shares closing down 9.32% to $18.68 after earnings missed estimates and the retailer cut guidance

Gap stock is making multi-year lows on the move, as shares were under pressure leading up to its first-quarter earnings report. As one could surely guess by now, that report didn't go all that well.

Earnings of 24 cents per share were well short of analysts' expectations of 32 cents. Revenue of $3.7 billion missed estimates of $3.78 billion and fell 2% year over year. Same-store sales also fell, declining 4% in the quarter and were the worst result in three years.

Could it get any worse? Actually, yes. Management slashed its fiscal-year earnings outlook and cut its same-store sales guidance.

Gap is the latest in a long line of struggling retailers right now. PVH Corp, Canada Goose, Foot Locker, Nordstrom, Capri Holdings, Kohl's and others have been pounded after reporting their results. It's been a disaster out there and Gap's latest quarter did anything but inspire confidence.

What should investors do now? Let's look at the charts. 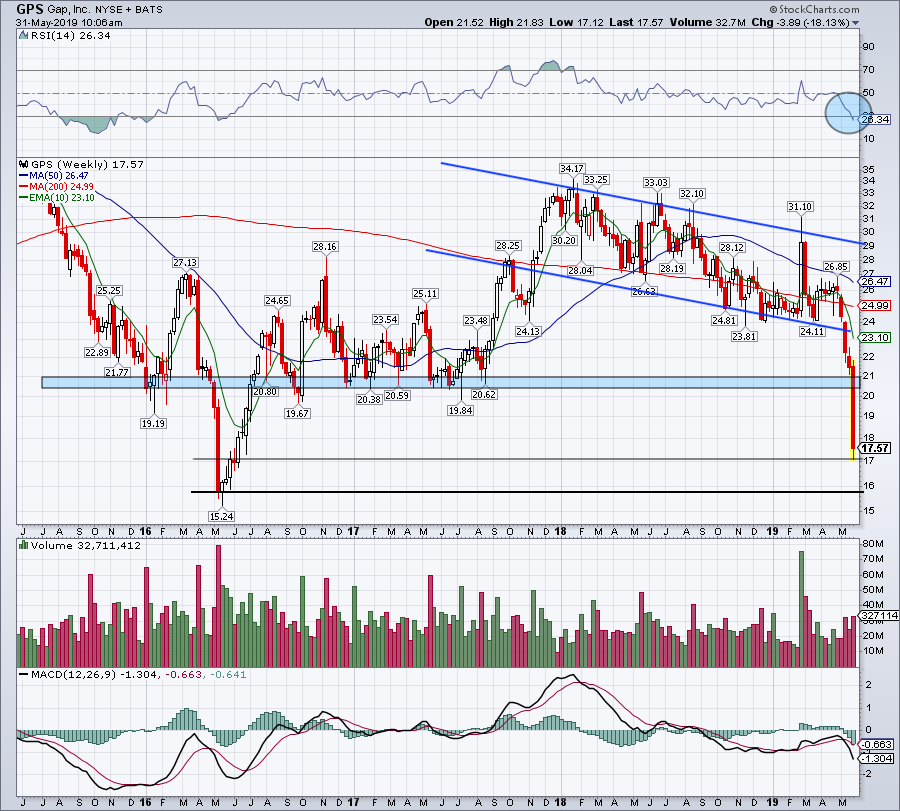 The chart for Gap stock is nothing short of a disaster, with it putting in its fifth consecutive weekly decline. Given the massive drop we've seen this week, it's no surprise to see shares in oversold territory, according to the relative strength index (blue circle).

Some investors may have thought the recent selloff had more than accounted for Gap's poor quarterly results. After all, it was below all of its major moving averages, channel support (blue line) and at 52-week lows ahead of the results. But it wasn't enough -- and based on the reaction to other retailers this week Gap's action should come as little surprise.

So now what? Gap stock trades at about 8.5 times the lower end of management's new full-year outlook. With the stock at $17.50, it will pay a dividend yield of 5.5%. That said, one could argue that higher quality companies with similar yields -- Kohl's, for example -- are better alternatives.

The first level to watch next week will be this week's lows. Can GPS stock hold this mark and put in some kind of bottom? That's what we're watching for. If not, it could open the stock up to a decline down to the $15.80 to $16 range.

Should Gap stock start to rebound, look to see how it does in that $20.50 to $21 area (blue box), if it can even get there. That was a very notable level of support in 2016 and 2017. It would require a 15% to 20% rally from current levels, so don't expect this test to come on Monday. But if and when it comes, I expect this area to act as resistance.

For now, watch this week's low and see how GPS handles this level.