It’s good time to be a homebuilder.

The iShares U.S. Home Construction ETF (ITB), which tracks the homebuilding stocks, surged Friday to highs not seen since 2006 following blockbuster data for U.S. housing starts, which jumped 16.9% to 13-year highs in December.

The building boom — also the highest percentage gain for construction starts since late 2016 — has refocused Wall Street’s attention on the group, as has the ITB’s outperformance.

“We’re not at historical overbought extremes as of yet, and if history does at all rhyme, you’d be about another 5-10% higher before you kind of reach those ... extremes,” he told CNBC’s “Trading Nation” on Friday. “So, from our perspective, this is a pretty interesting and a pretty constructive-looking breakout.” 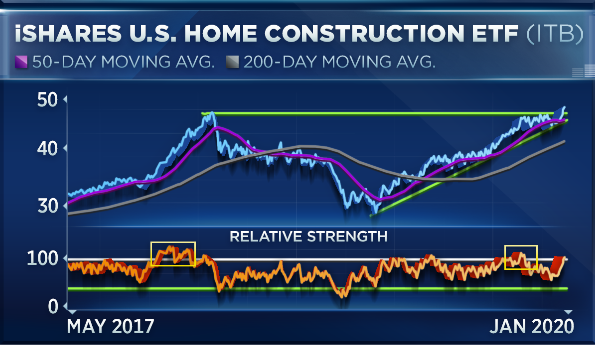 Drilling down into the ETF’s holdings — which include giants D.R. Horton and Lennar — Johnson liked one of its biggest, PulteGroup. 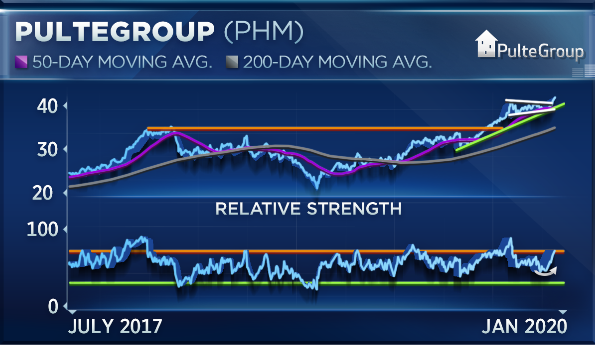 PulteGroup was also a top pick for Danielle Shay, director of options at SimplerTrading.

“I actually love the housing sector” as a whole, she said in the same “Trading Nation” interview. “We have a couple different things working for us right now.”

Among them are low interest rates, strong consumer sentiment and spending trends, and the rise in pop-culture representations of home renovating, Shay said.

“We ... have [all] this huge home renovation media going on right now, and it’s amazing,” she said, pointing to HGTV, Discovery’s home design cable channel. “Millennials love home renovations, and this is just an area that I see to continue trending higher. For me personally, I like KB Home first of all. I love Pulte as well. And we also see the likes of Home Depot and also Lowe’s trading higher.”

Shay and Johnson also said their own anecdotal experiences with home renovation have also warmed them to the space.

Shay said she’s currently renovating the house she bought a few years ago, and it’s become clear that renovation is “an area [where] people are spending a lot of money,” hence her preference for stocks like Home Depot and Lowe’s.

Johnson, who helped his wife renovate his home’s deck last summer, said the experience piqued his interest in the stock of Trex, the company that made the decking material he used.

“I started analyzing the charts a little bit more carefully, and it’s a very constructive-looking chart. In fact, we just added that into the Piper Sandler model portfolio just this week,” Johnson said. “So, it has raised [my] attention level.”

Trex shares hit an all-time intraday high of $100.49 on Friday, but closed just shy of the $99.61 closing record it made Thursday. 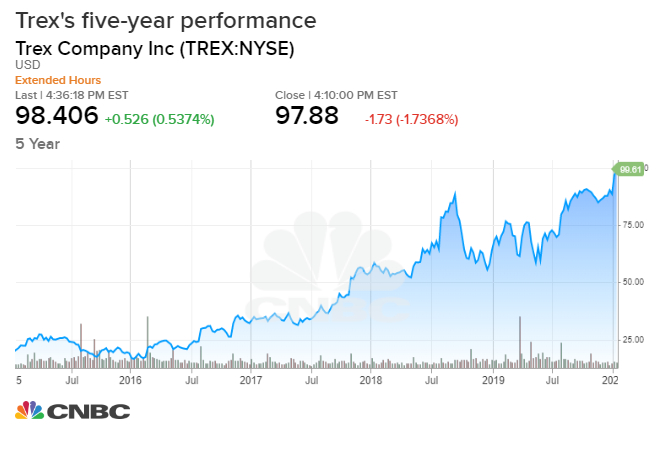