At this point, we are past sifting through the markets looking for warning signs. They are right in front of our faces now. The stock market is now extraordinarily overbought and in dangerous territory that is ripe for what could be a massive pullback, no matter how you try to look at it.

The technical, fundamentals, and options markets are screaming overbought and overextended. The S&P 500 is trading at nearly 21 times 2021 earnings estimates. The last time the S&P 500 traded at this valuation was in 2002, as the technology bubble was deflating. 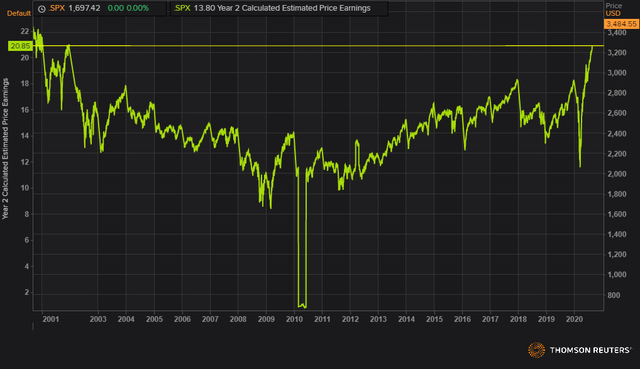 Currently, earnings estimates for the S&P 500 have been relatively unchanged, and are not even rising. They are now stuck around $156.84, giving the S&P 500 that historically high earnings multiple. It means that as the S&P 500 continues to increase, that multiple will continue to climb, making it harder and harder to support the market's valuations. 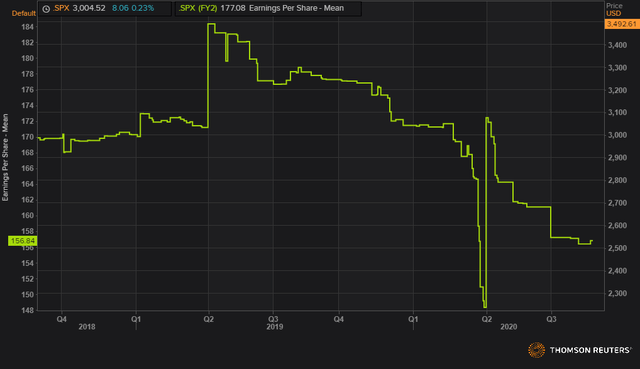 From a technical standpoint, stocks are screening overextended. The S&P 500 is now trading with a relative strength index of 78. The last time it was that high was in December of 2019. The only period higher than that was in January 2018 when it hit 83. Meanwhile, the index is also grinding along with its upper Bollinger band. Again, these are both indicators that would suggest the index is at very overbought levels.

It is even worse for the NASDAQ 100, trading with an RSI of 79 on its monthly chart, a very overbought level. Additionally, the index is trading well above its upper Bollinger band. Again both of these are indications of just how overbought the index is. Even more surprising is that the index is trading 7.8% above its upper Bollinger band. The last time it was that high or higher was in January 1999, December 1999, December 1999, February 2000, and Now.

Options Bets on The QQQ

The March QQQ $255 puts open interest rose by around 100,000 over the past two trading sessions. The puts were bought for about $14 per contract. It was part of a spread where the trader appears to have been closing out a position for the March $230 puts, rolling them to the higher strike price. 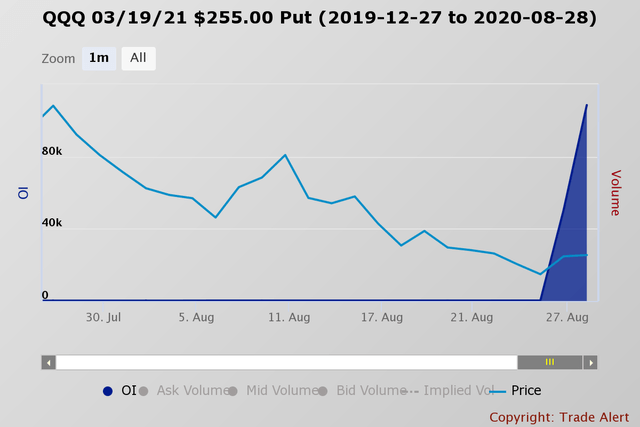 The VIX is Rising

Suddenly despite the S&P 500 and the NASDAQ surging, we are now even seeing VIX begin to rise and moving from around 21 on August 26 to roughly 26 on August 28.

Additionally, we are seeing call buying in the VIX index with the open interest for the VIX 27 strike price for expiration on January 20 rise by 100,000 contracts over the past five days.

Perhaps the market can continue to rise a bit further, but it seems that the market has gone from issuing warnings to just being in your face overbought. How much can it pull back all depends on the algo's flipping and how much momentum begins to build on a downward move. A break of the massive uptrend in the S&P 500 that started in April, would be a devastating sign. A clear break of the downtrend would come if the S&P 500 fell below 3,400. It could result in the index pulling back to around 2,860, a drop of about 18%. That would be a 62% retracement of the move higher from April 3, and also fill a technical gap created on May 18.

While it is impossible to know for sure when the rally will end, it will end, they always do. It is a matter of when the Algo's flip, getting the signal to sell. The one thing we have learned since January 2018 is that sell-offs happen quickly are very deep, and give us little time to react. This time may not be any different.