For Stocks, ‘Buying The Dip’ Is Now Likely To Be A ‘Losing Proposition,’ Says UBS

“Buy the dip” has been a rewarding strategy for much of this long-running bull market, but analysts at UBS said there’s something investors need to know.

“A world where leading indicators are accelerating is generally one where a correction in equities is an opportunity for investors and ‘buying the dip’ gets rewarded. In contrast, today’s backdrop with PMIs (purchasing managers indexes) in the low 50s and rates arguing for further declines often results in buying the dip being a losing proposition,” wrote strategists Francois Trahan and Samuel Blackman, in a Tuesday note.

PMIs are survey-based indicators that measure private-sector business activity. In the U.S., the Institute for Supply Management’s readings, particularly the manufacturing index and its components, such as the new-orders sub-index, are closely followed for clues to the economic outlook. A reading above 50 indicates activity is expanding, while a reading below signals contraction. 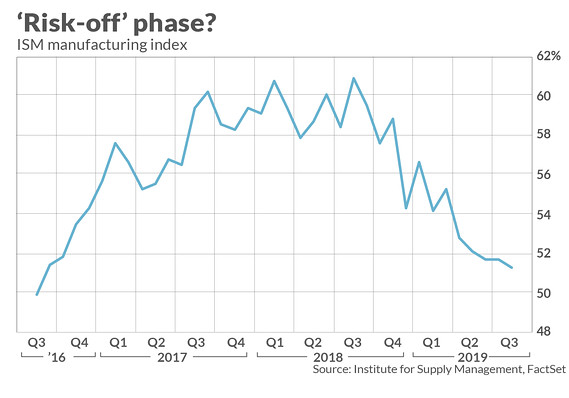 Investors who bought the dip after the stock market’s Monday selloff may have felt good Tusday when the the Dow Jones Industrial Average rose more than 370 points after the U.S. said it would delay imposing tariffs on some imports from China. The S&P 500 ​rose 1.5%. But stocks were off to a sharply lower start Wednesday as a brief inversion of the yield curve, as measured by the spread between 10-year and 2-year Treasury yields, reinforced recession fears.

Trahan and Blackman said that history shows over the last nine full economic cycles, going back to 1974, that buy-the-dip works the best when leading economic indicators, like PMIs, are accelerating.

During that period, which the analysts call the “risk-on” phase, buying-the-dip had an almost perfect record. After the readings peak, however, during the “risk-off” phase, the performance is mixed. And when PMIs have dipped below 50, marking the “risk-aversion” phase, dip-buying has rarely paid, they said (see chart below).

There’s more to it. Determining the phase of the cycle is one part of a three-item checklist, the analysts said. The ideal risk-reward scenario is in place when the “risk-on” phase of the cycle is accompanied by interest rates that are supportive of an expansion in the price/earnings ratio and the earnings outlook is favorable. Right now, would-be dip buyers are 0-for-3, they said.

Not only has the cycle entered a “risk-off” phase, but the corporate earnings outlook has deteriorated. As for interest rates, the analysts look at yields with an 18-month lag. While the lagged effects of an earlier decline in yields argued for higher P/E ratios in early 2019, “the path laid by interest rates 18 months prior to today shows that there is now tightening in the pipeline, and it’s more likely we experience multiple contraction than expansion in the months ahead,” they wrote. Multiple expansion refers to the willingness of investors to pay more for a dollar of earnings.

Taking those items together, the analysts said they would label the risk/reward outlook for buying the dip as “extremely poor.”