Short sellers are rarely popular, but their job is important. As I END_OF_DOCUMENT_TOKEN_TO_BE_REPLACED

Bank stocks, admittedly, are not the sexiest investment vehicle. After all, with END_OF_DOCUMENT_TOKEN_TO_BE_REPLACED

When screening the market for stocks that are trading at fair prices, END_OF_DOCUMENT_TOKEN_TO_BE_REPLACED

Flying Blind, Part 2: The Destruction Of Honest Price Discovery And Its Consequences

In Part 1 we noted that the real evil of Bubble Finance is not merely that it leads to bubble crashes, of which there is surely a doozy just around the bend; or that speculators get the painful deserts they fully deserve, which is coming big time, too; or even that the retail homegamers are always drawn into the slaughter at the very end, as is playing out in spades once again. Daily.

Given enough time, in fact, markets do bounce back because capitalism has a inherent urge to grow, thereby generating higher output, incomes, profits, wealth and stock indices. That means, in turn, investors eventually do recover from bubble crashes—notwithstanding the tendency of homegamers and professional speculators alike to sell at panic lows and jump back in after most of the profits have been made—or even at panic highs like the present.

Instead, the real economic iniquity of central bank driven Bubble Finance is that it destroys all the pricing signals that are essential to financial discipline on both ends of the Acela Corridor. And as quaint at it may sound, discipline is the sine qua non of long-term stability and sustainable gains in productivity, living standards and real wealth.

The pols of the Imperial City should be petrified, therefore, by the prospect of borrowing $1.2 trillion during the upcoming fiscal year (FY 2019) at a rate of 6.o% of GDP during month #111 through month #123 of the business expansion; and doing so at the very time the central bank is pivoting to an unprecedented spell of QT (quantitative tightening), involving the disgorgement of up to $2 trillion of its elephantine balance sheet back into the bond market.

Even as a matter of economics 101, the forthcoming $1.8 trillion of combined bond supply from the sales of the US Treasury ($1.2 trillion) and the QT-disgorgement of the Fed ($600 billion) is self-evidently enough to monkey-hammer the existing supply/demand balances, and thereby send yields soaring.

But that’s barely the half of it. All the laws of economics, which are now being insouciantly ignored by the stock market revilers, are also time and place bound. That is to say, deficit finance in a muscle-bound Welfare State/Warfare State democracy like the US is always a questionable idea.

After all, it is virtually guaranteed based on the budgetary doomsday forces now at work that by 2030 the public debt will approach $40 trillion compared to the $930 billion level where it stood when the Gipper took office in January 1981. In a half century, therefore, the GDP—swollen by inflation notwithstanding—will have grown by 8.5X versus a 43X eruption of the debt.

Even then, that’s the long-trend of the thing: The cyclical context is the far more preposterous part. The very idea of running a 6.0% of GDP deficit at the tail end of what would be the longest business expansion in recorded history is just plain insane. Yet as the Donald and his feuding band of Capitol Hill Republicans stumble from one bi-weekly CR (continuing resolution) fix to the next, they exude complete obliviousness to the fiscal time-bomb strapped to their chests.

Admittedly, the Dems are far worse. Even as they appropriately champion the cause of the Dreamers for the wrong reason (i.e. in pursuit of Democrat voters rather than the real economic need for additional workers and Tax Mules), their true agenda at the moment is stasis and parity. That is, no change (stasis) whatsoever in the $2.5 trillion entitlement monster, but a dollar for dollar increase (parity) in domestic appropriations to match the $80 billion per year defense increase demanded by the GOP hawks (which is most of the GOP).

Our point is that prior to the final betrayal of sound money incepting with Greenspan’s arrival at the Fed in 1987, politicians of both parties had a healthy fear of deficits because in the absence of massive monetization by the central banks, rising deficits tended to cause “crowding out” and soaring interest rates.

In effect, even the quasi-honest monetary policies of the 1953-1987 period generated counter-vailing constituencies for fiscal rectitude. Thus, when interest rates rose, the lobbies for small business, homebuilders, Savings and Loans, farmers and capital goods suppliers predictability brought their political heft to bear in behalf of fiscal restraint.

No more. The Fed’s massive and relentless suppression of yields has eliminated the counter-vailing constituencies for fiscal rectitude and, at length, vaporized the politicians’ fear of deficits.

And understandably so. The public debt is up by 220% from the pre-crisis peak (Q4 2007), while interest expense has risen by only 20%.  With the debt rising 10X faster than its service cost, why would anyone expect the politicians to do anything but kick-the-can?

And worst still, why would they not loose all historical memory that might otherwise warn of the extreme dangers posed by radically expanding the deficit at the tail end of the weakest business cycle in modern history? Indeed, the Fed’s culpability for the nation’s imminent fiscal catastrophe is doubly evident when the full extent of the above chart’s false price signals is dissected.

To wit, not only has the Fed driven the weighted average cost of the Federal debt to under 1.7% and therefore into negative yield territory when inflation is factored in; it is also the case that its massive debt monetization has further minimized the true cost of the public debt owing to the so-called “profit remittance” to the Treasury.

That is, the Fed collects upwards of $125 billion from the yield on its $4.4 trillion of Treasury and GSE notes, but pays essentially nothing for its liabilities, which are printed from thin air. The Fed’s gross interest income less several billion of operating costs and $25 billion of IOER payments to the banks (an inducement to the banks to keep their excess reserves idle and not lend them out at lower than the Fed’s target funds rate) is therefore returned to the Treasury in a round robin of monetary hocus pocus.

As shown below, after the explosion of the Fed balance sheet from $900 billion at the time of the Lehman meltdown to $4.4 trillion, these payments to the US Treasury soared, reaching a peak of $117 billion in FY 2015. Accordingly, more than 25% of the carry cost of the Federal debt in recent years has been hidden. That is, off-set by this bogus monetary round trip of treasury interest payments to the Fed which mostly come back as profits remittance.

As a practical matter, the bars in the chart below will be heading toward the zero-bound in the next couple of years as IOER payments to the banks continue to soar (as the Fed raises its target funds rate);  and as it is also forced to book “loss provisions” against its annual profits as interest rates rise and the market-to-market value of its $4 trillion+ balance sheet declines sharply.

So suddenly, the current $300 billion interest cost on the public debt will get hit with a double whammy. The weighted average yield on the Federal debt will rise by 200-400 basis points in the years ahead, and the huge off-setting Fed remittance will disappear.

Accordingly, we project that the net interest expense will double to $600 billion within three years and soar past $1 trillion per year well before 2027.

In the face of soaring debt service costs and rising bond market yields, the politicians will finally panic. Having experienced exactly that up close and personal during the early 1980s when the 10-year yield touched nearly 16%, we are quite sure that the old time deficit panic will make a belated resurrection in the Imperial City.

We are also quite sure that it will be too late. In the wake of the GOP’s asinine tax bill and the spending spree now underway, the public debt will soon be growing by $1.5 trillion to $2 trillion per year. Under normalizing interest rates, that alone with add $50 billion to $75 billion per year to the interest tab.

Alas, that happens to be a bigger number than any conceivable package of annual spending cuts or tax increases for which a majority on Capitol Hill could be mobilized.

In short, by the time that rising interest rates and soaring debt service payments are permitted to perform their fear-inducing function among the politicians, there will be no imaginable way to stop the nation’s fiscal doomsday machine.

And that is the real cost of systematically falsifying yields and prices in the bond market. 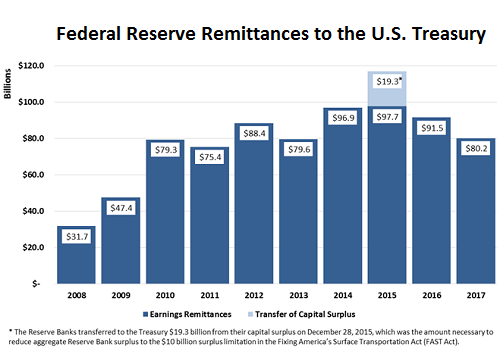 In part 3 we will address the false signals being broadcast to the Wall Street end of the Acela corridor. But here’s the spoiler alert: Like the case of interest on the public debt, the relevant metrics are bound by both the laws of economics and the time and place in which they are measured.

At the present time, the S&P 500 is trading at the absurd multiple of 26.3X what are estimated to be reported profits for 2017. Yet the sell-side stock peddlers say not to worry because the one-year forward multiple on ex-items earnings is still only in the high teens.

The business cycle has not been outlawed and this one has at best a few quarters or even a year or two to go. So forward earnings are irrelevant nonsense. They are an interim place holder before the 30% to 50% hit to profits happens when the US economy finally experiences its next rendezvous with recession.

The very idea that you would value the market based on a timeless forward PE multiple is complete baloney, of course. Yet that’s exactly where the Fed’s drastic financial repression and destruction of honest price discovery has led.

That is, to valuation multiples on a trend-adjusted basis that have shot the moon, and to a bubble peak that is desperately searching for its relief pin.