For the first time in a long time, concerns about inflation are END_OF_DOCUMENT_TOKEN_TO_BE_REPLACED 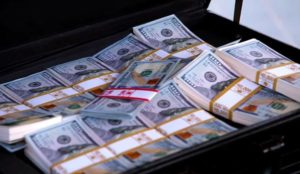 An undercover FBI informant in the Russian nuclear industry who was made to sign an “illegal NDA” by former AG Loretta Lynch, claims to have video evidence showing Russian agents with briefcases full of bribe money related to the controversial Uranium One deal – according to The Hill investigative journalist John Solomon and Circa‘s Sara Carter.

The informant, whose identity was revealed by Reuters as William D. Campbell, will testify before congress next week after the NDA which carried the threat of prison time was lifted. Campbell, originally misidentifed by Reuters as a lobbyist is actually a nuclear industry consultant who is currently battling cancer.

As previously reported, Campbell was deeply embedded in the Russian nuclear industry where he gathered extensive evidence of a racketeering scheme involving bribes and kickbacks.

“The Russians were compromising American contractors in the nuclear industry with kickbacks and extortion threats, all of which raised legitimate national security concerns. And none of that evidence got aired before the Obama administration made those decisions,” a person who worked on the case told The Hill, speaking on condition of anonymity for fear of retribution by U.S. or Russian officials. –The Hill

Campbell’s attorney, former Regan Justice Department official Victoria Toensing, previously told Fox Business host Lou Dobbs “He can tell what all the Russians were talking about during the time that all these bribery payments were made.”

Sarah Carter: He’s very sick and he’s been battling cancer and going chemo. He is in a battle for not only his life, but in a battle against what he perceives as people within the US government that don’t want this story to come out.  But there’s so much information that he is willing to share with the public to set the record straight, and believe me we’re gonna get it out there. He is going to have his say. His voice will be heard.

Hannity: He knew about the bribery, kickbacks, extortion of Putin’s agents in the US?

John Solomon: He is going to be an extraordinary fact witness because he gathered so much information. There are videotapes where the Russians are opening up briefcases full of cash. These are the people we then gave uranium to, that we then gave nuclear fuel contracts to.

Hannity: This is happening before they sign off on Uranium One? They knew about bribery extortion kickbacks money laundering before? They knew this was Putin and they did it anyway!

John Solomon: Yes. The Russians really thought they had played America on this one.