Big banks will start releasing their quarterly numbers this week. The outlook END_OF_DOCUMENT_TOKEN_TO_BE_REPLACED

"Men, it has been well said, think in herds; it will be END_OF_DOCUMENT_TOKEN_TO_BE_REPLACED

The other day, after reading one of my posts, my old boss sent me a note. It was a comment about the madness of investors chasing the hot momentum tech stocks.

“We were reminiscing about this stuff last night and I clearly remember that near the end [of the DotCom bubble], CNBC decided to have the CEO of International Paper on Power Lunch. They immediately received what they said was hate mail. After that, the NASDAQ fell from 5200 to 2000 and it ushered in one of the greatest bull markets ever in old economy stocks (2001-2008).”

I thought that was a great insight. The mood at the top is downright hostile towards other investing themes.

I am not sure if we are at an equivalent point. It sure feels like the “Just own the damn robots” mantra has engulfed the collective psyche of the investing public, but hey – we all know what Keynes learned the hard way. 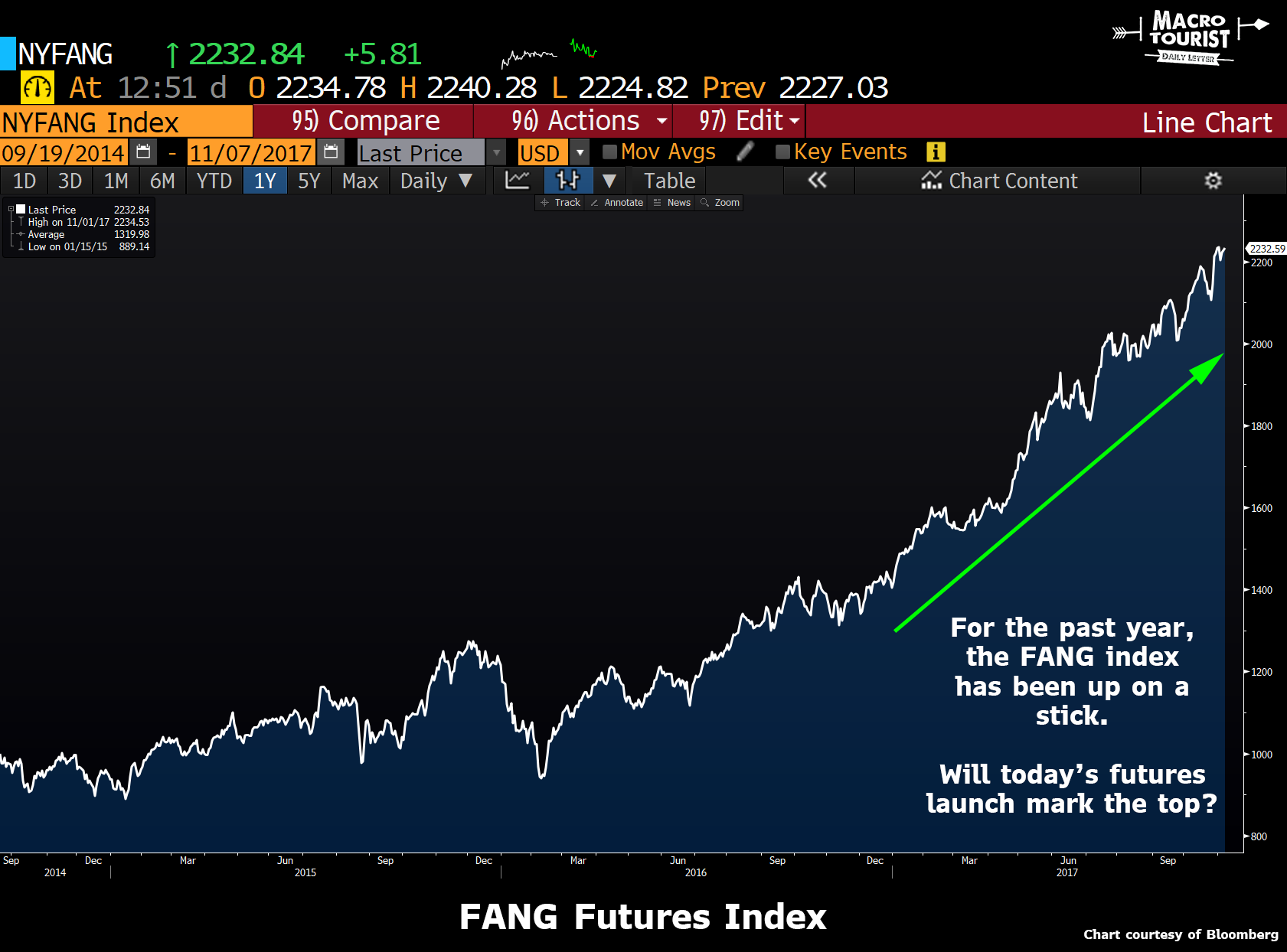 But I want to make one important point. It’s possible to be bearish on the FANG stocks, but not be some perma-bear who thinks the world is about to collapse.

The reality of today’s limited alpha market is that when an investing theme gets some legs, it often becomes overdone and prone to disappointment. I have written about how, all too often, this results in a A Series of Rolling Mini-Bubbles.

There is nothing wrong with observing that the new era tech stocks are stupidly overbought, and that the risks are to the downside in the coming months. You can be bearish on FANG without thinking all stocks are going to zero.

To help us out with hedging that risk, the ICE Exchange is launching their FANG index futures contract this morning. And man oh man, this is one crazy list of names.

That reads like a who’s who of speculative 2017 cult stocks.

For those interested in trading this bad boy, here are the contract’s specs: 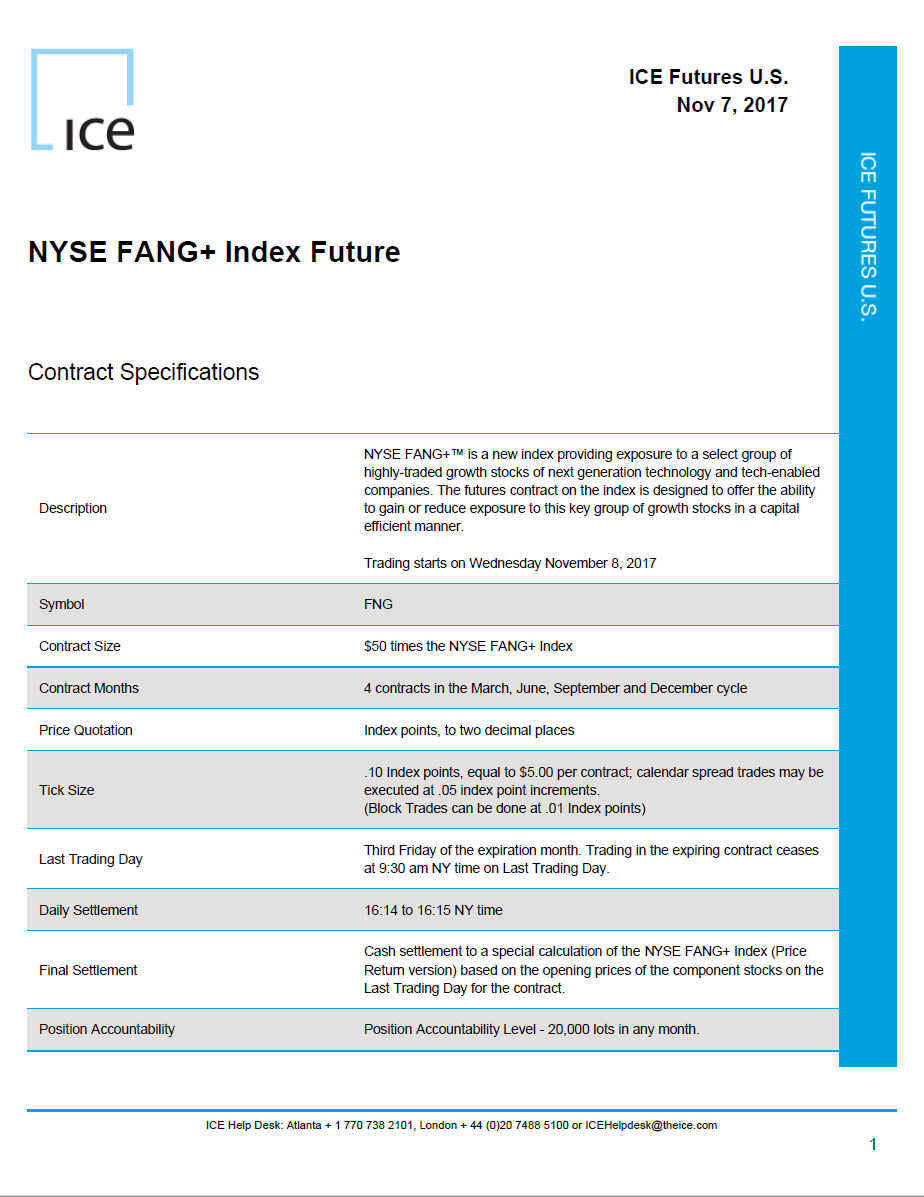 This new FANG contract offers some great opportunities to short the speculative names that have been the source of such over-exuberance, while maybe hedging it with a long position in the S&P 500 futures contract. 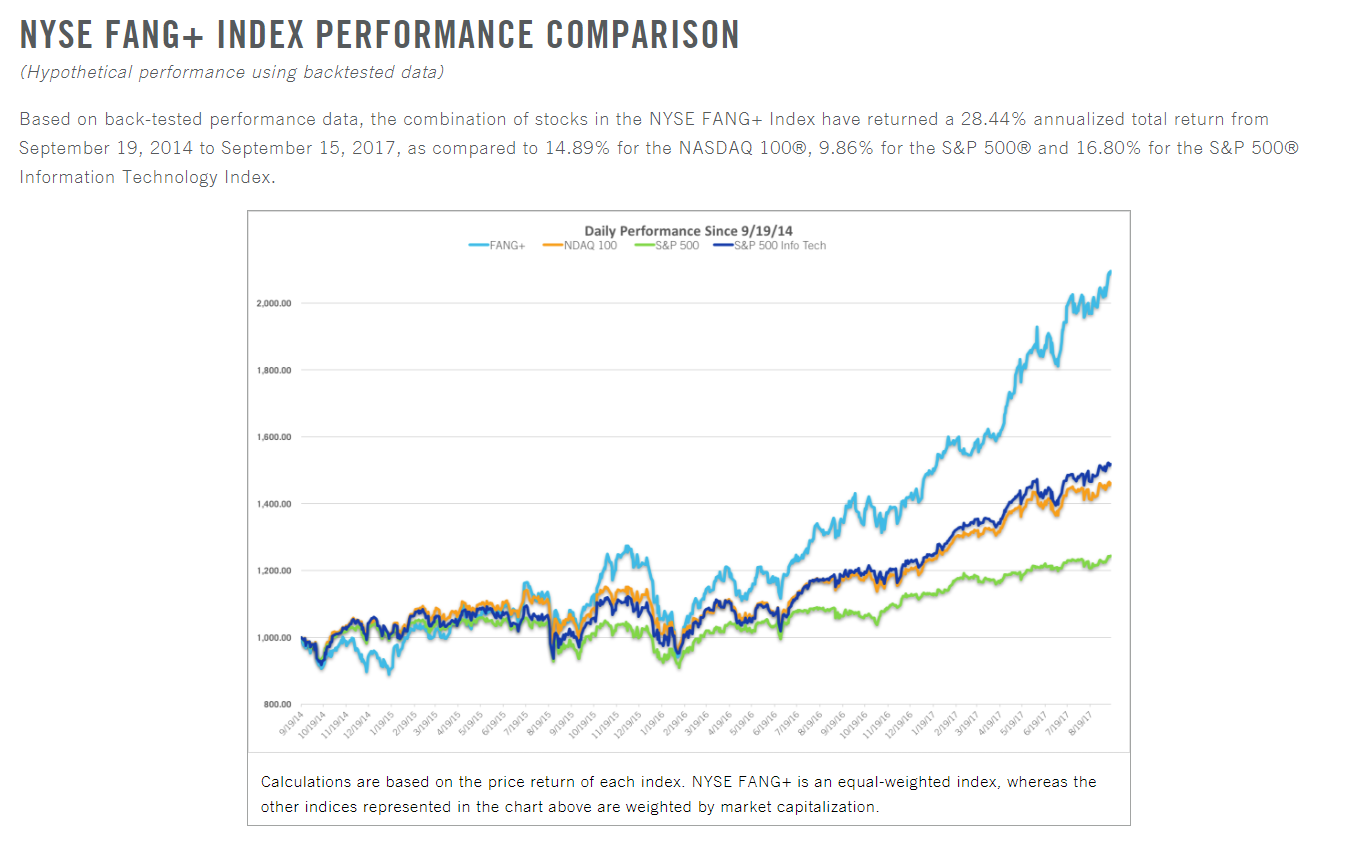 One of my favourite value investors, Greenlight’s David Einhorn, has gotten his face ripped off shorting what he calls his “bubble basket.” From the Globe and Mail:

David Einhorn is as sure as he ever was that a reckoning approaches for some of the world’s hottest stocks.

The famous hedge-fund manager, known for such prodigious short calls as betting against Lehman Brothers in 2007, has been getting knocked around lately by what he calls his “bubble basket.”

A collection of stocks he views as disconnected from underlying value, Mr. Einhorn’s biggest short positions include Tesla Inc., Netflix Inc. and Amazon.com Inc. Year to date, those three names are up by 64 per cent, 56 per cent, and 32 per cent, respectively.

Greenlight structures these trades through OTC derivatives, so for odd-lotters like me, I have previously been out of luck shorting the “bubble basket.” Well, now with the FANG futures, I can get in just as much trouble as David by buying old-economy stocks and shorting the new tech darlings.

And for all those momentum loving equity bulls, now you can strip out the truly high performing stocks, and really lever up your returns.

Finally, for those shrewd investors who have been long these FANG stocks for some time, think about using the futures to hedge some profits. Remember – bulls and bears make money, pigs get slaughtered. Hedging has now never been easier.