Executives Are Buying Stock In Droves, Giving A ‘Strong’ Signal That The Comeback Is For Real

Executives are loading up on their company shares as the coronavirus-driven sell-off dents the broader market, signalling the heads of U.S. businesses are confident their companies will rebound.

The heads of Dell Technologies and Wells Fargo are purchasing shares while outsiders ditch riskier assets, sucking trillions in value from the U.S. stock market in recent weeks.

The ratio of companies with insider buying compared to insider selling is at 1.75 for March, its highest level since March of 2009, according to Washington Service, a provider of insider-trading and data analytics. Typically, that ratio is below 1, meaning more executives are selling stocks; however, the current positive ratio is a sign of corporate optimism and is bullish for equities and the future of the economy.

Insider buying activity provides “insight into which company insiders believe they have the liquidity to withstand a 1-2 month massive decline in economic activity and the solvency to withstand a ‘go forward’ economy that is less robust than the one left behind,” Raymond James analyst Tavis McCourt said in a note to clients. 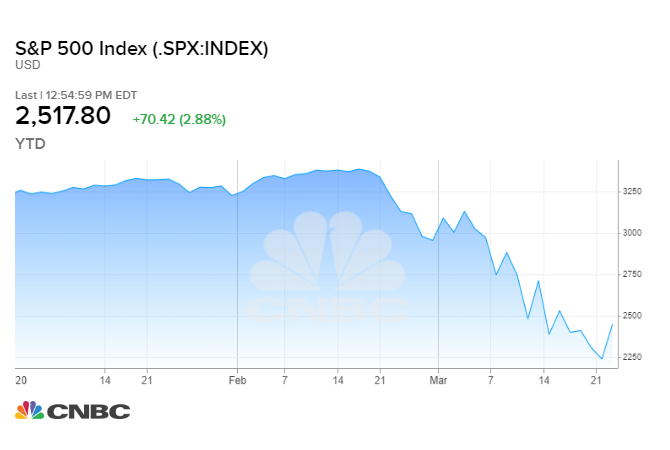 The broader market has experienced a dismal rout in recent weeks caused by the financial and societal disruption from the fast-spreading coronavirus. All three majors averages plunged into a bear market at the fastest rate of all time this month.

But extraordinary monetary and fiscal stimulus measures have put a floor under the market this week and the Dow Jones Industrial average is currently experiencing its best three-day rally since the 1930s. The bounce comes as C-suit employees are loading up.

“Insiders have a 35+ year track record of buying on the type of extreme weakness experienced in Q1′20,” InsiderScore director of research Ben Silverman said in a note. “A dramatic increase in insider buying volume combined with dampened levels of insider selling has resulted in the generation of industry buy inflections – our strongest, quantitative macro signal – for the entire market.”

Dell Technologies, the maker of PC computers, founder and CEO Michael Dell bought more than 800,000 shares worth $26.3 million last week, according to the Washington Service tracker. Shares of Dell are down about 40% from its recent high, which indicates Dell is expecting the stock to shoot up. Insiders likely wouldn’t be buying stock if they weren’t expecting healthy business on the other side of the virus turmoil, but they are long term shareholders. Raymond James said Dell is experiencing a pick-up in laptop orders due to the work-from-home trend.

Wells Fargo CEO Charles Scharf bought about $5 million worth of stock and Planet Fitness chief Christopher Rondeau purchased about $4 million in stock earlier this month. Both stocks have lost about 40% of their values since the February highs.

“Insider sentiment turned positive during the February 24 market sell-off and has built since then. Friday, March 13 proved to be an important day as an Industry Buy Inflection generated within the S&P 500,” Silverman noted.

Berkshire Hathaway bought $45 million worth of share of Delta Air Lines this month.

While insider buying its outweighing selling, some executives, like Amazon’s chief Jeff Bezos, got out just in time for the market rout. Bezos sold about $4.1 billion of Amazon stock in February, before the tailspin.

Executives often sell shares early in the year for taxes and other reasons. According to the insider activity tracker, Bezos’ sale was planned, as opposed to the billionaire having a prescient awareness about the severity of the coronavirus crisis.

Amazon’s stock has held up well compared to the broader market, serving as an important source of food and cleaning supplies as physical stores are closing and people increasingly avoid public spaces.

Marc Benioff of Salesforce sold $37 million in shares and Reed Hastings of Netflix sold $30 million in stock ahead of the market precipice. Both were planned.