DraftKings Stock Is Primed For A Big Bullish Break

DraftKings is fast approaching the four-month mark of its life as a public company. It has two earnings announcements under its belt and sits approximately 100% higher than its debut price.

Along the way, both the 20-day and 50-day moving averages have formed as well as multiple support and resistance zones. The riskiest part of playing an IPO is arguably behind us, and chart watchers can now swing away.

Regarding the doubling of DKNG stock from its launch, all of the gains came in the first month. Since then, we’ve mostly been consolidating while traders await the next catalyst.

Last week’s earnings failed to spark an upside surge. Optimists would have preferred the shares followed in the footsteps of Penn National Gaming (NASDAQ:PENN), which saw a huge run following its report.

On a positive note, at least Draftkings stock didn’t get torched. The down gap was mild and allowed prices to remain in the range carved out over the past few months. 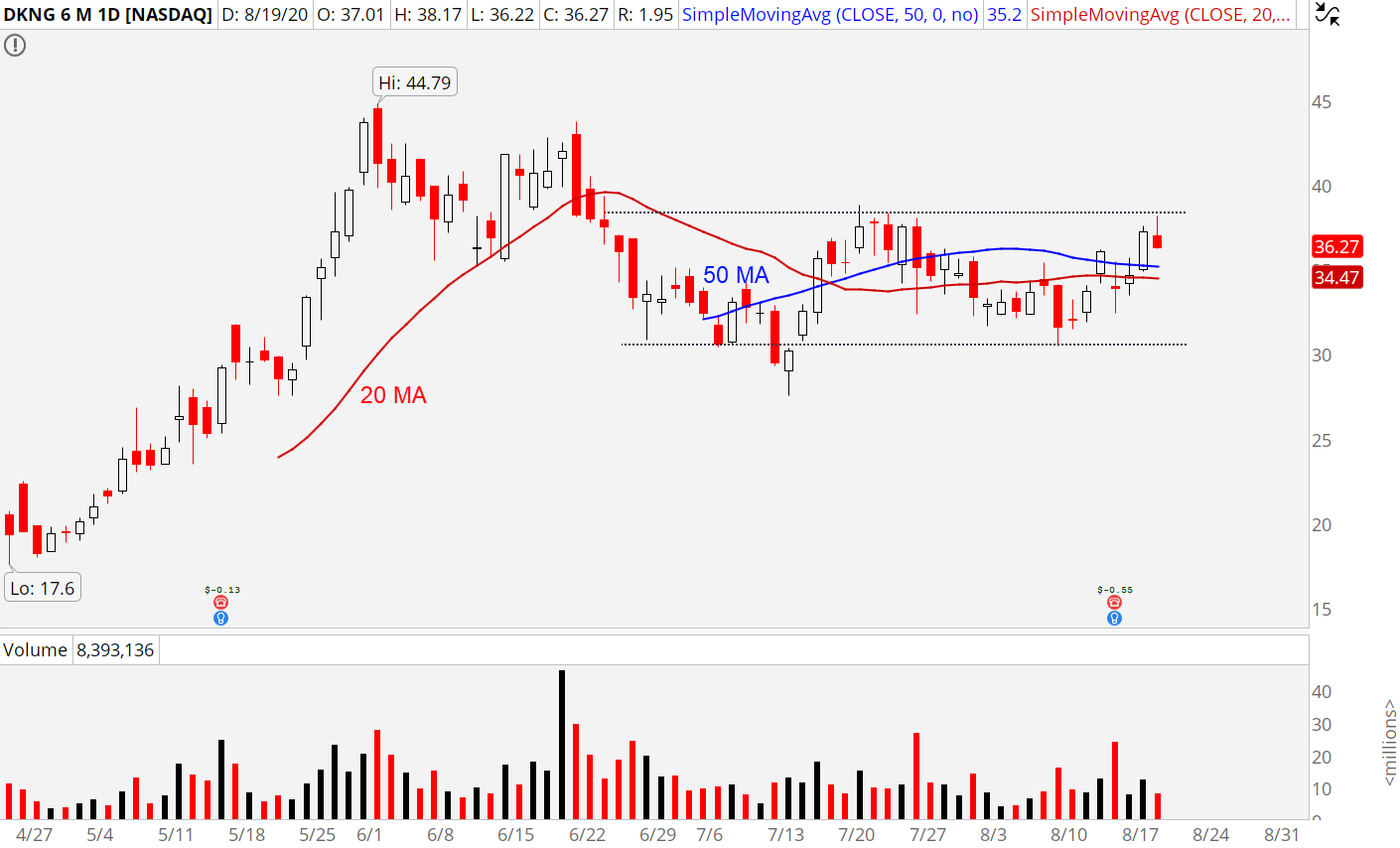 The stock box is clearly defined by a $31 support level and resistance at $38. Until we breach either level, directional trades are hard to build with conviction.

What has me interested in Draftkings stock today is that we’re now testing the top end. Sure, Wednesday’s 2.5% whack was a downer, but the entire market puked it up after the Fed meeting minutes were released. I’m chalking the drop up to broad market jitters and nothing more ominous. If this market dip proves as temporary as its predecessors, DKNG stock could be breaking out in no time.

Vaulting over $38 will clear a path to the mid-$40s. The next resistance zone doesn’t come into play until $43, so consider that the first upside target.

I can think of two valid strategies to trade, given the stock’s current setup. The first is a high probability cash flow trade designed to capitalize on continued neutrality. The second is a directional play intended to game the breakout.

If you’re betting DraftKings will continue playing ping-pong in the $30s, then selling puts is worth a shot. To fine-tune the entry and increase your chances of success, I would suggest waiting for DKNG stock to trade above a prior day’s high. If Wednesday’s drop is the beginning of a multi-day retracement, then you’ll get better pricing by waiting.

If DKNG remains above $30, then you’ll capture the max gain of $100 per contract sold.

The other option is to wait until the stock breaks out of its range by vaulting above $38. Upon confirmation of the breach, you could deploy a directional trade aimed at profiting from a run to the next ceiling in the mid-$40s. Because of DraftKings stock’s higher volatility, I prefer buying call spreads over calls outright. It hedges the volatility risk and reduces cost.

For this trade idea, we’re going out to October to give ourselves two months for the stock to make its move.

The Trade: Buy the October $40/$45 bull call spread. It’s currently trading for $1.50, but the cost will be higher if you wait for the breakout.