Short sellers are rarely popular, but their job is important. As I END_OF_DOCUMENT_TOKEN_TO_BE_REPLACED

Bank stocks, admittedly, are not the sexiest investment vehicle. After all, with END_OF_DOCUMENT_TOKEN_TO_BE_REPLACED

When screening the market for stocks that are trading at fair prices, END_OF_DOCUMENT_TOKEN_TO_BE_REPLACED 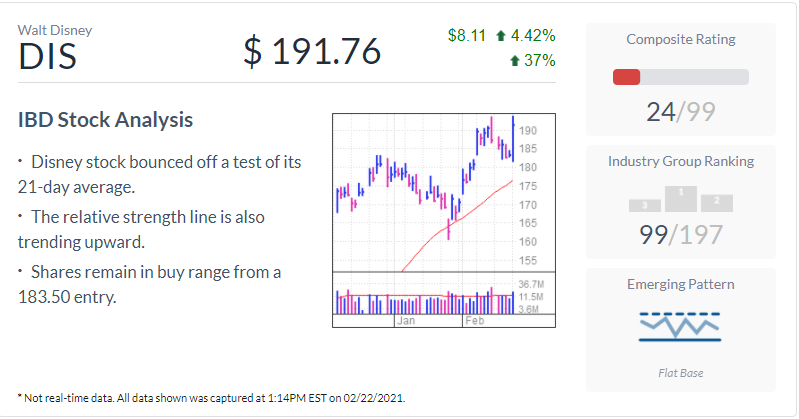 Disney stock is the IBD Stock Of The Day, as the media and entertainment conglomerate flashes a buy signal amid hopes that theme parks will fully reopen, while the Disney+ streaming service is poised for its next evolution.

Disney (DIS) has been reeling from park closures since the start of the pandemic in March 2020. In its fiscal first-quarter, parks revenue sank 53% to $3.59 billion, and the segment's operating income saw a pandemic-related impact of $2.6 billion.

Meanwhile, a jump in streaming subscribers helped deliver a surprise profit in Q1.

Star will mark a significant advance in the company's streaming strategy as it will feature edgier content for older viewer from properties like FX and 21st Century.

Shares closed up 4.4% at 191.76 on the stock market today, after setting a new high of 194.02 intraday. Earlier this month, Disney stock broke out from a flat base buy point of 183.50, according to MarketSmith chart analysis. Shares finished back within the buy zone, which tops out at 192.68.

The stock has an RS Rating of 69 out of a possible 99. Its EPS Rating is just 11, as it continues to struggle with the costs of having its parks closed.

Disney's streaming service has been the one bright spot for the media giant during the pandemic and a big focus of its growth.

At an Investor Day on Dec. 11, management said there are more than 100 titles in the works for Disney+. And Chapek says the company expects to have 230 million-260 million Disney+ subscribers by 2024. That's up from its early estimate of 60 million-90 million for that time frame.

The Financial Times reported on Feb. 22 that the company is also ramping up local-language productions in Europe to broaden its appeal. Jan Koeppen, president of Disney in Europe, said 50 original shows are expected by 2024.

The commissions range from an Italian mafia drama to a Dutch football documentary, the report said. Other potential projects include "Sam," a drama about Germany's first black police officer, and "Oussekine," a French mini-series about the death of a French-Algerian student protester in 1986.