Our man Jay Powell is talking a little more about raising rates. END_OF_DOCUMENT_TOKEN_TO_BE_REPLACED

Cheap stocks continue to be the land of opportunity for aggressive investors.We END_OF_DOCUMENT_TOKEN_TO_BE_REPLACED

What Sorkin is suggesting is more of the same, although perhaps with worse consequences. If banks take action where policymakers do not or cannot, they are essentially putting themselves above the law. And if banks start playing that role, where does it end?

What if, for example, banks and credit card companies decided to stop processing payments for any retail purchase of cigarettes? After all, cigarettes are demonstrably bad for all consumers, and secondhand smoke can harm innocent people. Should banks step in to help protect society at large?

Or what if banks decided to stop processing payments for abortion clinics because they believed the practice was immoral? Is it fair for financial institutions to make abortion effectively illegal? What if President Trump called on financial firms to cut off access to environmental groups he believed were delaying projects that could bring jobs to local economies? Maybe banks should freeze Colin Kaepernick’s checking account until he stops kneeling during the national anthem?

Many of these examples are extreme, but you get my point. Just because banks can be used to have a dramatic impact on our society doesn’t mean they should be.

– From the American Banker piece: Call for Bank Crackdown on Gun Sales Is Deeply Misguided

Even in today’s world replete with plutocrat public relations masquerading as journalism, it’s rare to encounter an article simultaneously pandering, authoritarian, childish and dumb. Nevertheless, I found one, and it was unsurprisingly published in The New York Times.

The title of the piece more or less says it all, How Banks Could Control Gun Sales if Washington Won’t, but let’s go ahead and examine some of the author’s suggestions in greater detail.

What if the finance industry — credit card companies like Visa, Mastercard and American Express; credit card processors like First Data; and banks like JPMorgan Chase and Wells Fargo — were to effectively set new rules for the sales of guns in America?

Collectively, they have more leverage over the gun industry than any lawmaker. And it wouldn’t be hard for them to take a stand.

PayPal, Square, Stripe and Apple Pay announced years ago that they would not allow their services to be used for the sale of firearms.

If Visa and Mastercard are unwilling to act on this issue, the credit card processors and banks that issue credit cards could try. Jamie Dimon, chief executive of JPMorgan Chase, which issues credit cards and owns a payment processor, has talked about how he and his bank have “a moral obligation but also a deeply vested interest” in helping “solve pressing societal challenges.” This is your chance, Mr. Dimon.

Let me interrupt your regularly scheduled programming for a quick moment to remind you of JP Morgan’s post-financial crisis criminal track record. Via Wall Street on Parade: 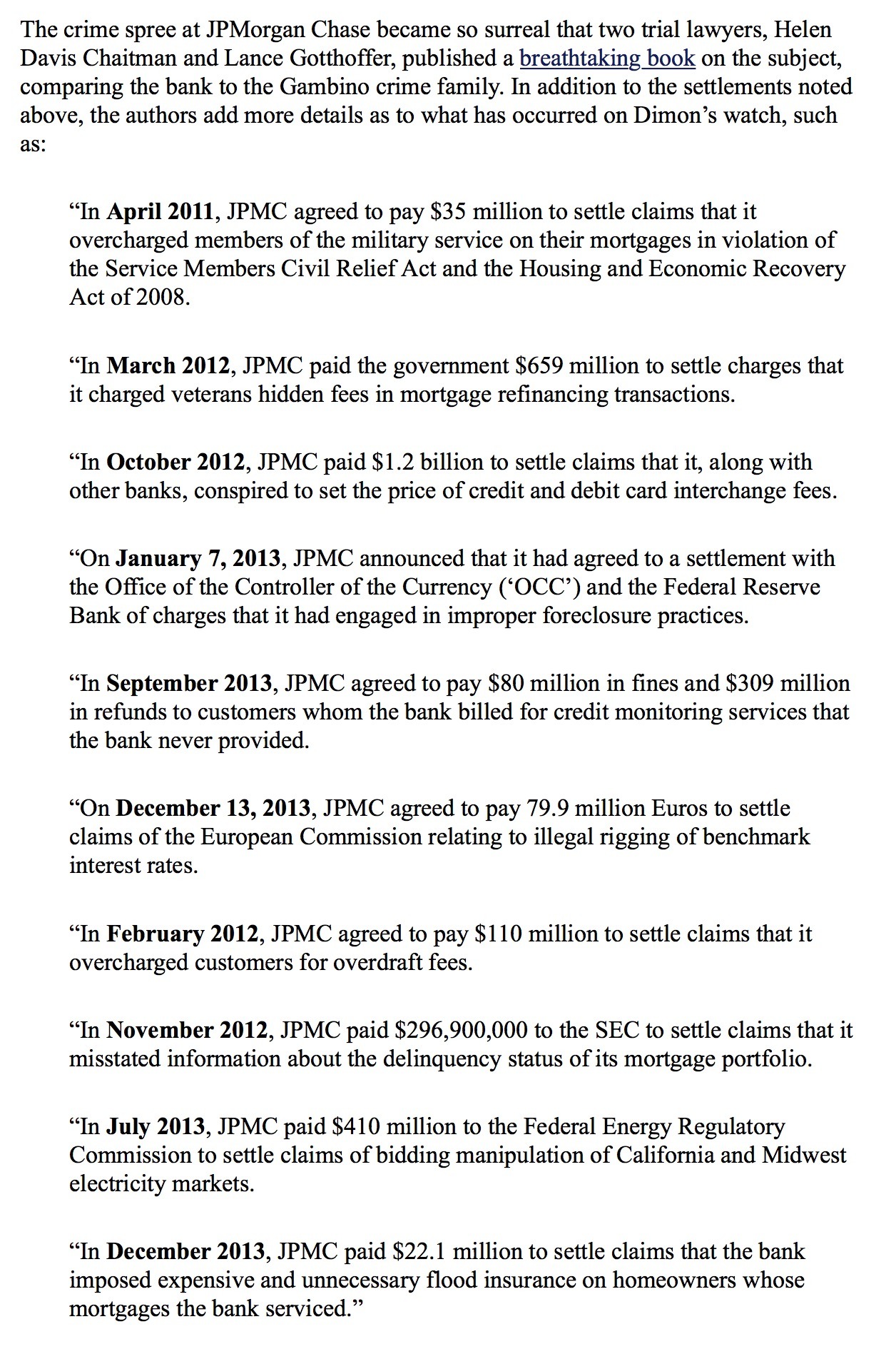 Now back to The New York Times article…

And here’s a variation on the same theme: What if the payment processing industry’s biggest customers — companies like McDonald’s, Starbucks, Apple, Amazon, AT&T, CVS and others that regularly talk about “social responsibility” — collectively pressured the industry to do it? There’s a chance that some of the payment processors would stop handling gun sales. Perhaps their voices would help push one of the banks to step out and lead?

Is all of this a pipe dream? Maybe, but I spent the last 72 hours calling and emailing a handful of chief executives to discuss these ideas. None wanted to speak on the record, because it’s a hot-button topic. But all applauded the idea and some said they had already been thinking about it. A few, I discovered later, called their peers to begin a conversation.

Critics of using the finance industry to influence gun sales might argue that such a move would be discriminatory against gun retailers. But gun sellers are not a protected class, like age, race, gender, religion or even political affiliation. This would be a strictly commercial decision.

That last line is a good example of why Andrew Ross Sorkin writes nonsense for The New York Times as opposed to say running a financial services company. If he thinks this would be a smart commercial decision, versus a potentially catastrophic one, he might want to get out of his bubble world for a couple of moments.

Although there’s a concerted effort to have the public believe otherwise, there’s simply no national consensus on this issue at all — even after the recent Florida shooting. As The Hill recently reported:

Fewer Republicans now support a ban on assault weapons than they did nearly two decades ago, according to a Washington Post/ABC News poll released Tuesday.

The number of independents who support such a ban has also dropped starkly since 1999, according to the survey.

A solid majority of Democrats – 71 percent – still supports such a proposal.

There simply isn’t overwhelming national support for more gun control. As such, if the mega banks that wrecked the economy a decade ago and consumed massive bailouts to survive, decided to use their power to shadow legislate it will not go over well. I can promise you that much.

While media coverage might make you think everyone is yelling for gun control, here’s some more of what we learned from The Washington Post poll:

If we’re looking for some kind of national consensus, it appears to be centered around the view that mental health issues lie at the core of mass shooting events. Any bank CEO foolish enough to start a fight and ban customers from buying what they want to legally purchase could very quickly regret it. Moreover, irrespective of your stance on the issue, it’s dangerous and irresponsible to call for shadow public policy by crooked mega banks.

Interestingly enough, as a huge Bitcoin proponent, I wouldn’t mind it at all if the banks listen to Sorkin. I couldn’t come up with a more effective marketing campaign to demonstrate clearly to the entire planet why Bitcoin is so incredibly important to a free society. It’s not as if mega banks are especially popular as things stand, so anything that makes a censorship resistance payment system look even better compared to the legacy financial system is perfectly fine by me. Bitcoin’s ability to fund Wikileaks in the face of a financial system blockade is what sparked my interest in the protocol in the first place. If banks want to signal to an entirely new demographic the important of permissionless money, be my guest.

If you liked this article and enjoy my work, consider becoming a monthly Patron, or visit our Support Page to show your appreciation for independent content creators.