The meme stock rally has taken off in recent weeks. Shares of END_OF_DOCUMENT_TOKEN_TO_BE_REPLACED

Technology shares sold off on Tuesday. The Technology Select Sector SPDR® Fund (NYSE:XLK), a benchmark ETF for S&P 500 tech sector stocks, closed down 1.8%. The broader market has been ranging as investors show reluctance about increasing risk despite blowout corporate earnings.

The problem: ongoing uncertainty about inflation. Even as Federal Reserve Chair Jerome Powell has repeatedly promised that inflation is only temporary and that interest rates will remain lower for longer, Robert Kaplan, President of the Dallas Fed, on Friday said the US central bank should start considering tapering its massive buying program, warning of 'imbalances' in the financial markets. As if that weren't enough to spook investors, Kaplan foresees raising rates a year ahead of Powell's timeline.

Adding weight to investor fears, escalating commodity prices are boosting worries of accelerating prices for an array of products ranging from food to housing. Then, early Tuesday, Treasury Secretary Janet Yellen said, "it may be that interest rates will have to rise somewhat to make sure that our economy doesn't overheat, that rising spending will likely lead to higher interest rates." Though she later walked back those remarks, saying she doesn't see inflation on the horizon, markets sharply sold off after her earlier comments.

Yellen, the head of the Fed from 2015 to 2018, seems to have calmed investors for now. However, mega cap tech shares, which have always borne the brunt of investor fears when inflation is in the spotlight, got dumped, likely because their valuations were already extremely stretched after being pandemic darlings amid the work-from-home environment. 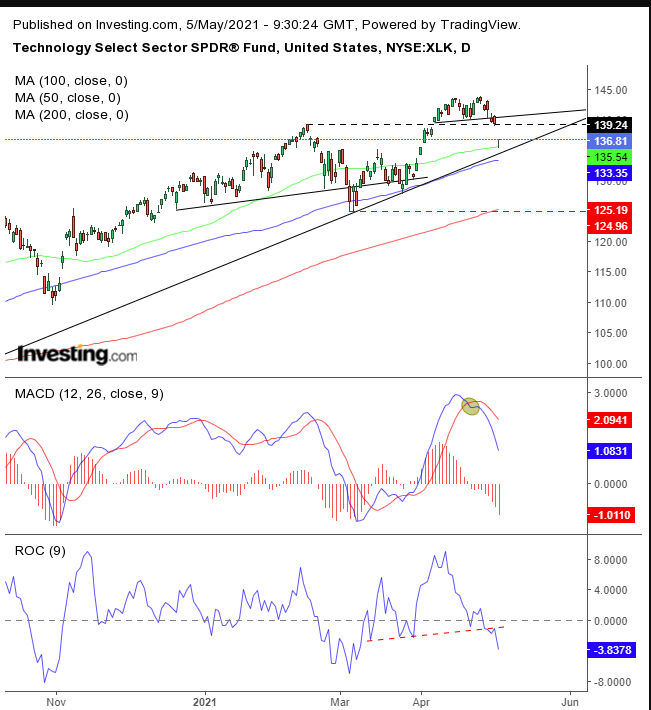 Yesterday’s selloff pushed the SPX's tech sector to complete a small double top. However, its implied target had already been reached, and it found support above the uptrend line since the 2020 bottom, developing a Hammer Doji.

Before this small top, traders developed a proper-sized H&S top, but, it blew out, and investors reversed positions. While it’s true that a failed pattern tends to catapult the price in the opposite direction—as it did here—it’s often an early signal of a top. While that didn't take hold now, conditions remain ripe for a top to occur, so it may come later.

As well, now that the failed pattern reached its reversed target, it too could be topping out. Note, the top developed precisely over the earlier, failed one. Now that it's fallen back below that level, could it be the beginning of a deeper drop?

Indicators seem to think so. Both the MACD and the RSI reversed, providing a rare consensus between price-based and momentum-based gauges.

Conservative traders should wait for the price to fall below 125.00, the Mar. 4 low, with which the 200 DMA realigned, before shorting.

Moderate traders would short with a close below the 100 DMA that protects the uptrend line, at 133.00.

Aggressive traders could enter a contrarian, long position to catch the expected short-term rebound, then short, provided they accept the added risk of dealing with an asset that is probably going to be volatile, for the chance of higher gains. Having a tight trade plan will help them navigate this complex trade.