We witnessed the tale of two markets in 2020.The market experienced a END_OF_DOCUMENT_TOKEN_TO_BE_REPLACED

END_OF_DOCUMENT_TOKEN_TO_BE_REPLACED

Every year in January and early February, the NFL playoffs run their END_OF_DOCUMENT_TOKEN_TO_BE_REPLACED

Carnival Looks To Be Permanently Impaired

The cruise line stocks have been volatile since the pandemic hit, to say the least. The group has been grappling with unprecedented levels of uncertainty, because the point when they’ll be able to generate meaningful revenue again hasn’t yet been decided, and perhaps worse, it is completely out of their control.

I have had mixed feelings on the cruise lines depending upon different developments that have occurred in the past six months or so, but the more I learn, the more I think a recovery is so far off that the stocks of these companies are overvalued, even at very low levels.

One example is Carnival (CCL), which tripled from the bottom set in March/April before months of sideways-to-down action. 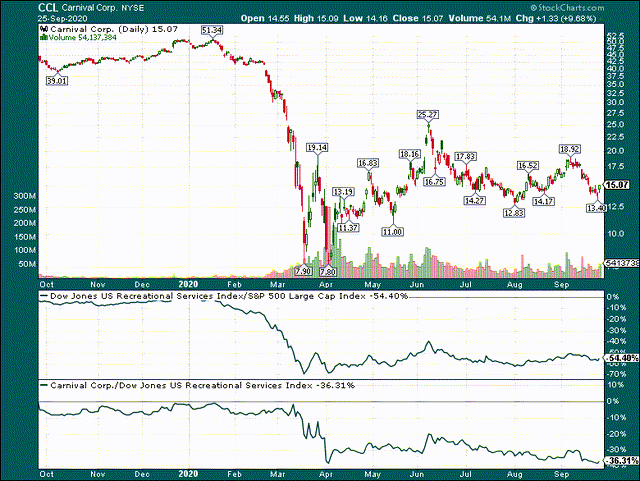 Seeing that the stock traded for $52 just before the pandemic hit certainly makes $15 look enticing. However, the reason shares have failed to rally for months during a huge bull market is because the cruise lines face a tremendous amount of uncertainty, and the length of time between now and a return to normal continues to extend.

I believe the cruise lines will return to some kind of normal at some point, but I also think that is years down the road. The damage that can be done between here and there is significant, and I’m extremely cautious on Carnival as a result.

There is certainly no shortage of issues when it comes to Carnival. The company’s revenue outlook is showing enormous signs of weakness, for obvious reasons, but the impact is hard to overstate.

Carnival produced in excess of $20 billion in revenue last year, and I’m struggling to think it will hit that level again within three or four years from now. Revenue estimates are still clinging to ~$6 billion or so for this year, although much of that depends upon the company being allowed to sail before the end of the year. Next year is supposed to see a rebound to about double this year’s level, but again, this is dependent upon the company being allowed to sail, and importantly, customers wanting to sail.

We know Carnival will have to implement many new safety procedures before and during a voyage that will not only cost extra money to maintain, but will almost certainly take away from the experience for customers. A cruise post-COVID will look something like a pre-COVID cruise, but there will be many significant differences.

Wearing a mask for most of your vacation, a complete overhaul of food options, reduced activities, reduced excursions, and social distancing measures while onboard probably don’t make it to the top of many people’s holiday lists. In other words, Carnival isn’t just fighting against being allowed to sail; it has to make people want to show up again and spend their money, which I believe it will struggle to do, particularly if capacity restrictions of some sort are implemented. This isn’t Carnival’s fault, but it is no less impactful.

Net debt has ballooned so far this year, and given the ever-extending return to normal timeline, it should only get worse next year and beyond. Carnival was leveraging itself up to buy new ships and run its business anyway, and this is simply exacerbating an already-existing problem.

The other thing is that Carnival’s credit profile has been obliterated due to this crisis, meaning it now has to pay much more to borrow. We can see that with projected interest expense of $661 million this year and over a billion dollars next year; net debt between 2019 and 2021 is expected to roughly double, but the cost of servicing that debt is expected to be 5X. That’s the power of a weakened balance sheet, and it will take years for Carnival to unwind this damage, if it can at all.

Put into further context, below we have the same interest expense numbers alongside earnings before interest and taxes, or EBIT.

EBIT hovered around $3 billion for the past several years, but is obviously going to be hugely negative this year and next year. The point I’m trying to make is that even if/when EBIT recovers, there is another ~$800 million headwind from higher interest expense over 2019. That would have been about a quarter of pre-COVID EBIT, so that needs to come out of earnings estimates for the future.

Couple this with the fact that if the crisis extends out further, this will get worse and not better, along with the fact that EBIT recovery is still a very long way away, and this is a recipe for the company never reaching pre-COVID earnings levels again.

I’m not trying to sound needlessly bearish, but the fact is that I don’t see anything to like. This company isn’t in control of its own destiny and it has enormous headwinds to contend with for any sort of recovery.

The extent of the damage can be seen above, as Carnival is expected to post huge losses this year and next, followed by a small profit in 2022 and 2023. But that’s not the only problem Carnival has. Indeed, if we look at revisions, it appears to me the bottom hasn’t even been found yet.

Revisions have stopped plummeting lower, but are still definitely trending in the wrong direction. I don’t see a catalyst for this to turn around anytime soon, and thus, I think any rallying in the stock is a chance to sell, not a reason to believe the turnaround is here.

Carnival is an extremely volatile story stock at this point, so it could go up or down in big quantities at any time. However, if you’re buying Carnival hoping for long-term value and a return to $50+, I think you’re barking up the wrong tree. Carnival is, in my view, a permanently impaired business that should be avoided.