Cheap stocks continue to be the land of opportunity for aggressive investors.We END_OF_DOCUMENT_TOKEN_TO_BE_REPLACED

Walgreens Boots Alliance is a component of the Dow Jones Industrial Average that has become technically "too cheap to ignore" and offers a solid dividend of 3.33%. Buy Walgreens between its 2019 low of $49.34 and its quarterly pivot at $55.04.

The stock's weekly slow stochastic reading ended last week at 8.03, well below 10.00, making the stock technically "too cheap to ignore." Walgreens is also fundamentally cheap with a P/E ratio of 8.66 and a dividend yield of 3.33%, according to Macrotrend. Because of this profile, Walgreens has the characteristics to become a member of the "Dogs of the Dow."

The Daily Chart for Walgreens 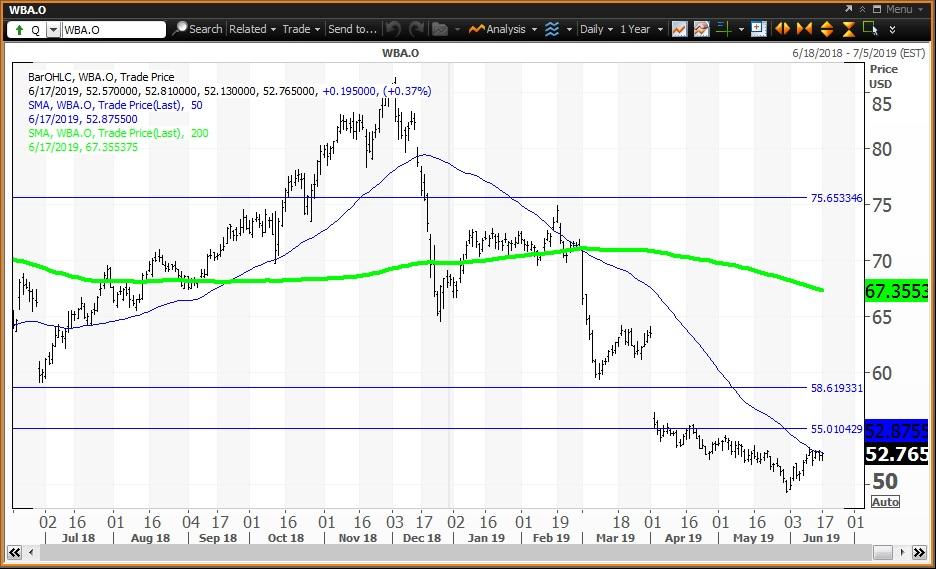 The Weekly Chart for Walgreens 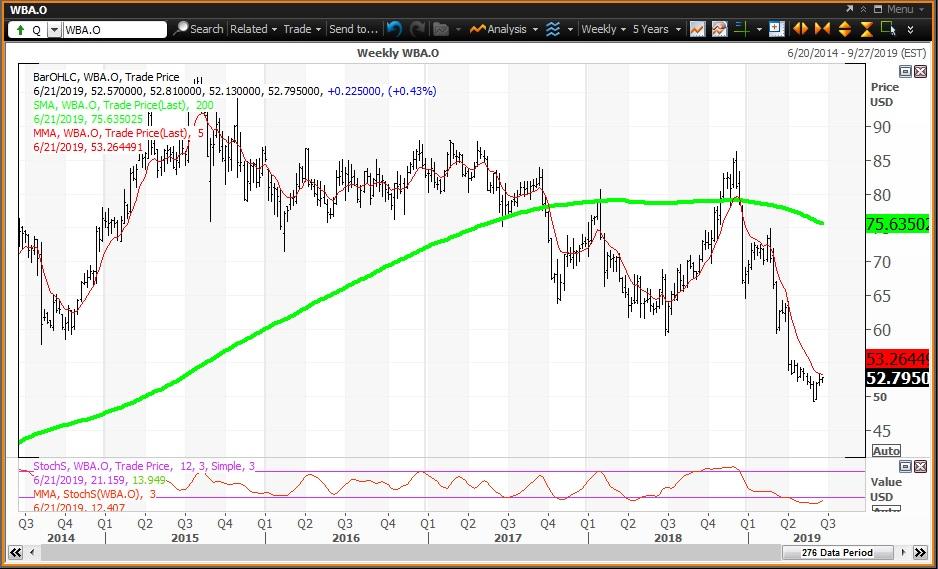 The weekly chart for Walgreens is negative but oversold with the stock below its five-week modified moving average of $53.22 and well below its 200-week simple moving average or "reversion to the mean" at $75.63. The 12x3x3 weekly slow stochastic reading ended last week at 8.03, which is below 10.00 as a technical indicator, showing the stock "too cheap to ignore." A weekly close above $53.22 with the weekly stochastic reading rising above 80.00 would be a technical buy signal.

How to use my value levels and risky levels:

Value levels and risky levels are based upon the last nine weekly, monthly, quarterly, semiannual and annual closes. The first set of levels was based upon the closes on Dec. 31. The original semiannual and annual levels remain in play. The weekly level changes each week; the monthly level changed at the end of January, February, March, April and May. The quarterly level was changed at the end of March. My theory is that nine years of volatility between closes are enough to assume that all possible bullish or bearish events for the stock are factored in. To capture share price volatility investors should buy on weakness to a value level and reduce holdings on strength to a risky level. A pivot is a value level or risky level that was violated within its time horizon. Pivots act as magnets that have a high probability of being tested again before its time horizon expires.

The close on June 28 is the second most important for 2019. This close is an input to my proprietary analytics and will generate new weekly, monthly, quarterly and semiannual levels.

How to Use 12x3x3 Weekly Slow Stochastic Readings:

My choice of using 12x3x3 weekly slow stochastic readings was based upon back-testing many methods of reading share-price momentum with the objective of finding the combination that resulted in the fewest false signals. I did this following the stock market crash of 1987, so I have been happy with the results for more than 30 years. The stochastic reading covers the last 12 weeks of highs, lows and closes for the stock. There is a raw calculation of the differences between the highest high and lowest low versus the closes. These levels are modified to a fast reading and a slow reading and I found that the slow reading worked the best. The stochastic reading scales between 00.00 and 100.00 with readings above 80.00 considered overbought and readings below 20.00 considered oversold. Recently I noted that stocks tend to peak and decline 10% to 20% and more shortly after a reading rises above 90.00, so I call that an "inflating parabolic bubble" as a bubble always pops. I also call a reading below 10.00 as being "too cheap to ignore."