Buy the Dip in Netflix? Not So Fast

Shares of Netflix have been under constant pressure since the company disappointed investors in July with its quarterly results.

The recent growth in streaming video platforms has only poured salt in the wound, particularly after behemoths like Disney and Apple actually undercut Netflix on price.

It doesn't help that Netflix continues to burn through cash as it builds out its content library, at the same time it continues to lose key content to its competitors. For instance, AT&T's streaming platform will take back the rights for Friends in 2020, while NBC will take the rights to The Office next year, too, which are Netflix's top two shows.

Further, the company just announced it will boost its content spending in Britain. That's got the stock breaking to new lows this month as shares tumbled 5.5% to $270.75 in Friday's trading session.

Let's look at the charts. 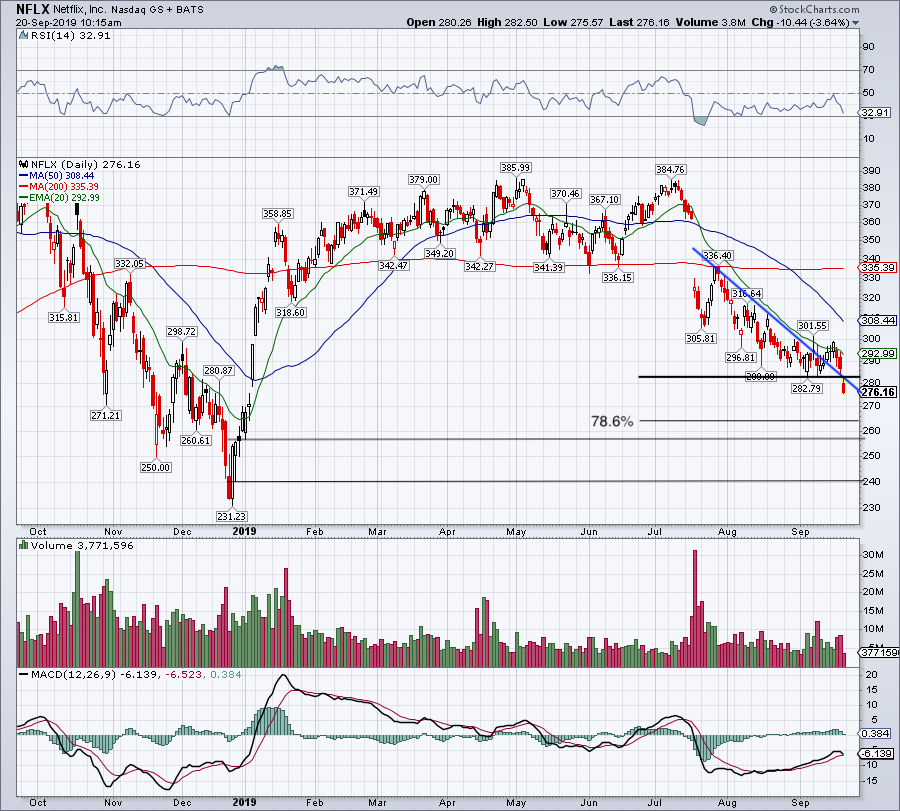 Netflix stock is a disaster right now, as dip-buyers continue to get burned every time they dip their toe in the water.

This comes as little surprise, though. After the company reported earnings in mid July, we said a rebound back to prior range support and the 200-day moving average near $340 was possible. However, this prior support level has acted as resistance, while NFLX stock is now well below its post-earnings lows.

"The charts do not look particularly promising...it may run into a long-term uptrend support line [at $290], about where the 61.8% retracement comes into play. If the stock can't hold this level, it may very well fall into no man's land for a while."

No man's land is exactly what we have now. Netflix is not a buy-the-dips candidate because those dips continue to get lower and lower. We want to be dip buyers on stocks with higher lows, not the other way around.

With Netflix breaking its September lows on Friday, the situation is only worsening. The 78.6% retracement is near $264.50, while the 2019 lows are down near $258. Maybe Netflix stock bottoms at one of these points. Maybe it continues lower to the 52-week low near $231.

Loose-ended statement? You bet. Because right now Netflix stock is a falling knife and those are near impossible to time. Traders either need to see NFLX stock reverse and move higher, or get cheaper into a better risk/reward zone.

Until one of those two developments occur, Netflix stock is only on watch, but it's not one to take action on yet.