Cheap stocks continue to be the land of opportunity for aggressive investors.We END_OF_DOCUMENT_TOKEN_TO_BE_REPLACED

Microsoft stock hit another new 52-week high Tuesday as MSFT continues to soar in 2019. The tech giant has expanded its cloud computing business in recent years to try to catch up to Amazon and adapt with the times. Microsoft also happens to be the world’s most valuable public company at the moment, with its market cap once again above $1 trillion.

Microsoft’s cloud peer Google announced last week the launch of its cloud-based gaming service, Stadia. The offering will come at a much lower price tag than traditional consoles from industry giants Sony, Nintendo, and MSFT, and might spark what some anticipate to be a video game world dominated not by expensive consoles, but streaming cloud. Not to be outdone, Microsoft said at the E3 (Electronic Entertainment Expo) conference earlier this week that is plans to roll out its xCloud game streaming service to the public later this year.

Microsoft’s cloud gaming offering won’t exactly follow Stadia’s model, but it is part of a larger effort to diversify its gaming unit. This also includes what has been called the Netflix for gaming known as Game Pass. And the firm teased its next-generation Xbox it calls Project Scarlett, which is scheduled for a holiday 2020 release. The upcoming console will be equipped with AMD processors and should help the firm stand out against some of its peers. MSFT has even joined forces with gaming rival Sony for a cloud-gaming partnership.

Clearly, MSFT is much more than its gaming division. But investors should not discount how big the addressable market is. The global video game market was $135 billion in 2018, according to Newzoo—console games jumped 15% to over $38 billion. 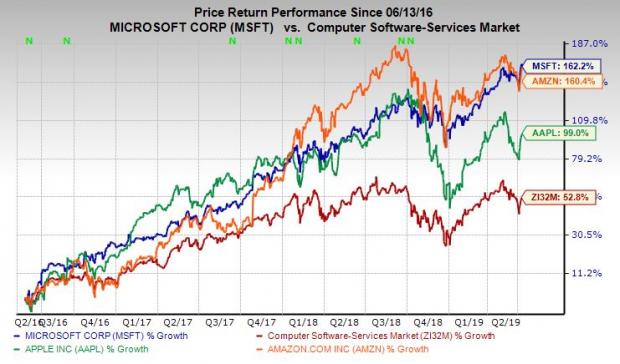 As we mentioned at the top, shares of MSFT have soared in 2019 to top fellow tech titans Apple and Amazon. Investors will notice that Microsoft’s recent strength is part of an impressive three-year run that has seen it top its aforementioned peers. MSFT stock hit a new 52-week intraday high of $134.24 per share through morning trading Tuesday. Overall, the S&P 500 information technology sector is up 9% in the past five sessions. This marked its best performance since October 2011, according to the Wall Street Journal.

Microsoft is coming off a better-than-projected Q3 fiscal 2019 that once again saw its cloud business stand out. Microsoft’s Intelligent Cloud revenue climbed 22%, with its vital Azure division up 73%. The firm has accumulated a large portfolio of cloud clients, which includes Walmart.

Along with its growing cloud, IoT, and artificial intelligence businesses, Microsoft’s legacy segments, from Office to Windows, are as important to businesses and individuals around the world as ever. Last quarter, the company’s Productivity and Business Processes revenue jumped 14%, with More Personal Computing up 8%. In fact, its Intelligent Cloud segment is still the smallest of its three core units, but not by much these days as the segments all came in within a $1 billion range last quarter.

On top of this impressive and stable top-line growth outlook, Microsoft’s adjusted Q4 earnings are projected to pop over 7%, with fiscal 2019 expected to climb 18%. Peeking ahead, the company’s 2020 EPS figure is expected to climb over 11% higher than our current year-estimate. Investors will also notice that the firm has earned a ton of positive earnings estimate revisions recently. And the company’s strong management team helps MSFT consistently top earnings estimates.

Coupled with its impressive climb, Microsoft is a dividend payer that has raised its quarterly payout throughout the years. Microsoft’s current dividend represented a 9.5% jump from the prior year’s quarterly payout. The company’s annualized dividend currently rests at $1.84 per share, with a 1.39% yield.

MSFT has consistently traded at a discount to compared to its industry’s average over the last decade, despite its shares easily outpacing the Computer Software-Services Market average. Microsoft stock is currently trading at 26.1X forward 12-month Zacks Consensus EPS estimates, which comes in below its industry’s 26.5X average. Microsoft’s price/sales ratio of 8.3 comes in above its industry’s average but marks a discount compared to its relatively new rival, Salesforce’s 8.5.

Microsoft is currently a Zacks Rank #2 (Buy) and sports a “B” grade for Growth in our Style Scores system. The company has expanded and transformed into a more well-diversified tech powerhouse.

MSFT seems to be a solid tech stock to consider adding to a portfolio right now even at its new highs, though some might want to wait for a small pullback. The company provides exposure to many growth areas, pays a dividend, and doesn’t seem to be in the U.S. government’s crosshairs like Facebook and Google.