Buy Disney If It Pulls Back To This Level, Top Trader Says

Disney is king of the box office this year.

The media giant has taken in $3.72 billion at the domestic box office this year, led by blockbuster hits “Frozen 2,” “Avengers: Endgame” and “The Lion King,” among others. That accounted for nearly 40% of the U.S. haul.

It has also dominated Wall Street — the Dow stock has risen 31% this year, its best year since 2013.

Quint Tatro, president of Joule Financial, says it pays to be strategic here.

“We’ve been fans of Disney and long Disney for a long time, but it’s too rich here and I think anybody that wants to own Disney really has to be patient. Put it on their shopping lists. It’s much like Apple, [which] we talked about a few weeks ago,” Tatro said on CNBC’s “Trading Nation” on Monday.

Disney has rallied 10% in the past three months. It also trades at 25 times forward earnings, more expensive than the S&P 500′s 18 times multiple.

“There will be a pullback. And when that pullback comes, when everybody is scared and selling, that’s when you go in and buy the shares,” said Tatro. “We’d love to see it come back to the $131 to $135 range, and we pull the trigger and add more at that level.”

That would imply a nearly 9% decline for the stock. It would also take it down to levels not seen since late October.

J.C. O’Hara, chief market technician at MKM Partners, is also wary of a bout of weakness heading into 2020.

“From 2015 to the beginning of 2019, so a five-year period, Disney was basically rangebound. It was sideways. And then all of a sudden, it got repriced and it broke out in the early spring. That longer-term momentum is something that we like to play,” O’Hara said during the same segment.

Seasonality should also benefit Disney’s shares in the first half of 2020, he says. 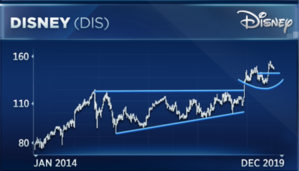 “When we look at the seasonal factors that come into play, especially the end of the year and the beginning of the year, January is the second-biggest month for Disney, going back 10 years,” said O’Hara. “Let’s see if we could buy a short-term pullback in January, because the three-month stretch from February to the end of April, on average, has returned 10%. ... We want to play for a pullback in the near term, and get back into the stock for longer-term momentum on the upside.”