Activision Blizzard Inc. (NASDAQ: ATVI) is the world’s most successful standalone interactive entertainment company. It’s also one of the world’s largest gaming companies with a market capitalization of $35.76 billion.

Though its price declined significantly in late 2018, we’ll show you why Activision Blizzard stock is a great stock buy and we’ll show you how to get it.

History of Blizzard Company and Stock

Activision’s roots go back to the original Atari game console and Blizzard Entertainment’s claim to fame was as a PC software publisher with classic gaming franchises such as Warcraft, Diablo, StarCraft and Call of Duty.

Blizzard was known for its massively multiplayer online role-playing game (MMORPG) World of Warcraft, which helped pioneer the third generation of this increasingly popular gaming genre when it launched in November 2004.

Activision Blizzard stock has also seen impressive returns over the years, trading from under $0.40 per share in September 1994 up to an all-time high of $84.68 in September 2018. The stock has since pulled back and currently trades at the $46.68 level, down over -41% from its high.

Blizzard Activision’s stock price has declined significantly since making its all-time high last September but Nintendo stock’s price has gained from $38.50 per share to its current level of $47.46 per share in the same time frame. Japan-based Nintendo (OTCQX: NTDOY) leads the gaming industry with a capitalization of $44 billion and Activision Blizzard trails with a still-impressive $35.7 billion.

ATVI is starting to look like a buy, especially if you purchase ATVI stock on dips. Time your purchases; it trades with a beta of 0.94 and a modest amount of volatility that closely tracks the broader S&P 500 stock market index.

ATVI stock also pays a dividend, which yields an annual 0.79% at $0.37 per quarter. The company’s other financial numbers also support a long position since it has trailing twelve month (TTM) earnings of $2.28 and the stock trades at 20.47 times earnings.

This compares very favorably to competitor Nintendo, which currently earns $1.44 TTM with a considerably higher price-to-earnings (P/E) ratio of 32.9. Nintendo’s stock price of $47.68 is currently less than $2 more than ATVI, which now trades at $45.86. 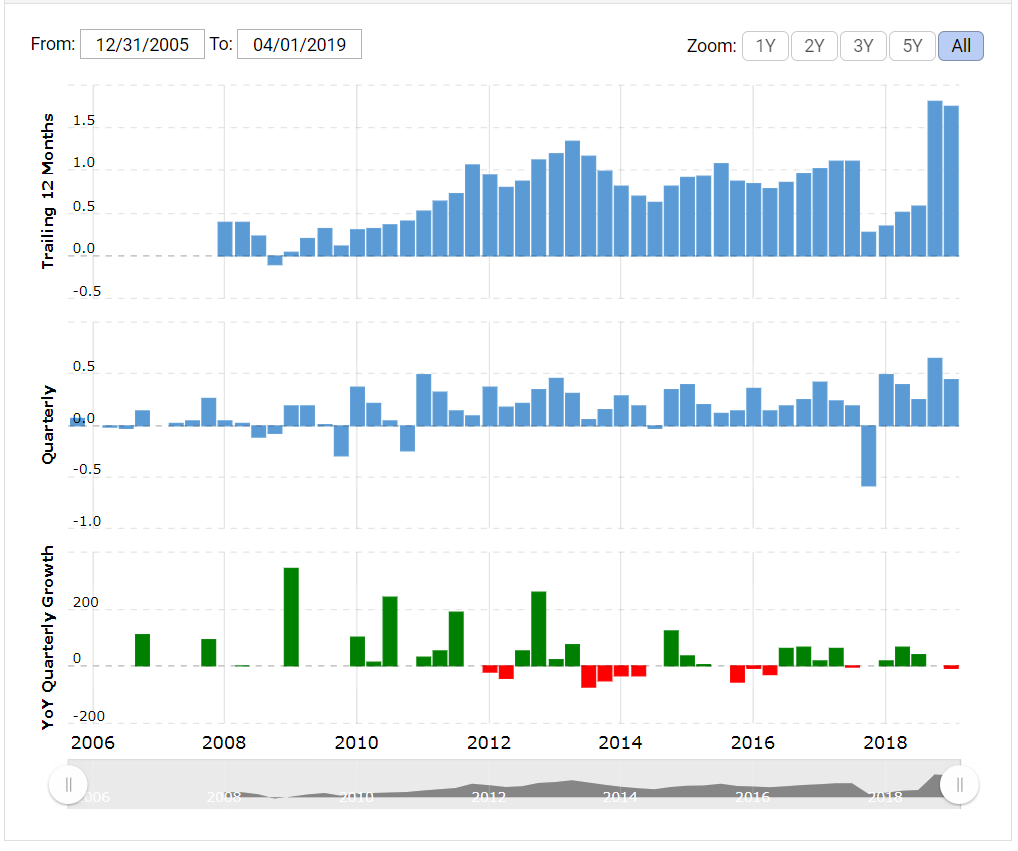 NTDOY stock pays a higher dividend of $1.48 that yields 3.11% per year and its stock appears to consolidate at the top of its range. ATVI stock appears to have made a low at the $39 level. Both stocks are highly rated by analysts, with the majority reiterating buy recommendations for both in the medium- and long-term.

Other stocks in the gaming sector, such as Electronic Arts (NYSE: EA) and Sony (NYSE: SNE) have higher stock prices and have also reached intermediate highs recently. While these other stocks may have higher earnings per share, they trade with greater volatility than the general market, with betas of 1.55 for Sony and 1.20 for Electronic Arts. Those levels also make them considerably more volatile than ATVI, with its current beta of only 0.94.

Considerations Before You Buy

How You Can Buy Blizzard Stock Right Now

You can start buying ATVI stock immediately if you already have a brokerage account. You’d need to open and fund an account if you don’t have a stockbroker with access to NASDAQ Exchange-listed stocks.

The most important thing to consider when you pick a broker is to determine what you’ll need. For example, do you actively trade and take positions in assets besides stocks, such as in commodities, options and futures? You might want to find a broker that provides access to research and educational resources such as videos, articles and podcasts on the market you plan to trade. Check for a user-friendly trading platform, too.

Most online brokerages offer clients and prospective clients a free virtual or demo account so you can practice trading, test your strategies and analyze markets and stocks without committing any of your funds. Opening more than one of these accounts with different brokers will let you compare the broker’s platform and execution.

E*TRADE’s trading platform has an intuitive, easy-to-navigate trading platform that can be used by both experienced and novice traders and also offers banking services. Other brokers that offer clients third-party or proprietary platforms might be more appropriate for advanced or seasoned traders.

Next, fund your trading account. Some brokers let you open an account with no minimum deposit but you’ll still need to fund the account if you intend to buy ATVI stock.

Keep in mind that different brokers have their own funding and withdrawal methods, although most take bank transfers and debit/credit cards. Check with the broker you’ve chosen to make sure it can suit your budget and preferred account funding method.

Watch ATVI stock to determine the best price before you buy. Most traders use technical analysis to gauge levels of supply and demand to make their positioning decisions.

Also, take into account the stock’s fundamentals and earnings releases. ATVI’s next earnings release is scheduled for August 8, 2019.  Once you’ve determined the best price for you to buy, you can enter an order at that price level.

Is Blizzard Activision Stock for You?

Technically, Blizzard Activision stock has traded in a consolidating pattern between $43.50 to $49 per share since mid-June. The company’s strong financials and solid game offerings, as well as a growing monthly active users (MAU) base, make Blizzard Activision a good candidate for long- and medium-term investment.

Spectator esports that also rely on many of the company’s flagship games add to the company’s expansion into branding, advertising and comparatively lower volatility than the stocks of its main competitors. ATVI stock could be an excellent option if you want to invest in the gaming sector.