Our man Jay Powell is talking a little more about raising rates. END_OF_DOCUMENT_TOKEN_TO_BE_REPLACED

Cheap stocks continue to be the land of opportunity for aggressive investors.We END_OF_DOCUMENT_TOKEN_TO_BE_REPLACED

In the 48 hours since Warren Buffett called the U.S. stock market “ridiculously cheap,” it has gotten somewhat cheaper. Bulls looking to console themselves after their roughest stretch in five months might want to consider his logic.

The Berkshire Hathaway chief executive officer cited low inflation and low borrowing costs in stating the view, which came in a CNBC interview. He didn’t elaborate much, but his terms are consistent with a two-pronged valuation standard sometimes called the Fed model, in which corporate earnings are treated as a yield and compared with Treasury rates.

Nobody cares less about day-to-day market moves than Buffett and anyone presuming on the notion stocks are cheap has done very well in 2019. Part of his point was to ask whether rates would stay low for much longer, a concern echoed by JPMorgan Chase & Co. CEO Jamie Dimon in a Bloomberg Television interview Wednesday in Beijing. The purpose of the following is to highlight a valuation model that differs from straight price-earnings ratios.

Here’s the math. The spread between the S&P 500’s earnings yield -- a proxy for how much equities “pay” shareholders -- and the 10-year Treasury yield currently sits at 2.9 percentage points. (The wider it is, the cheaper are stocks.) While that difference began to expand significantly in December of last year and has come in a bit since, strip out the last five months and the relative payout of stocks over bonds is the highest since 2016. 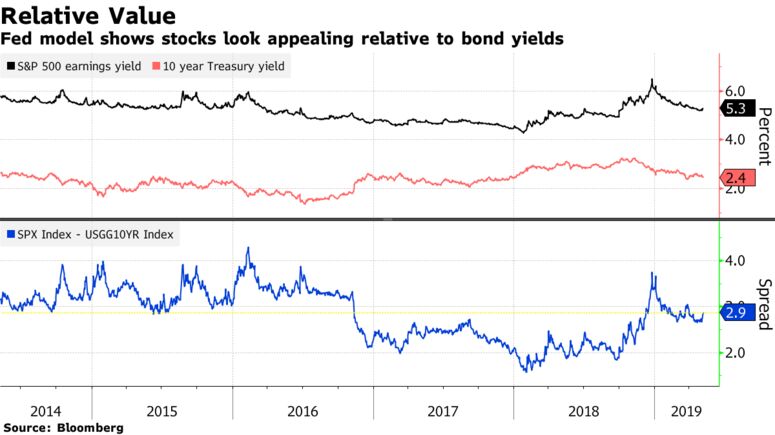 So, if you believe interest rates and inflation are a relevant consideration in how much people will pay for a claim on corporate earnings, right now they suggest valuations aren’t totally nuts.

This a baseline view for people trying to explain bullishness after the S&P 500 got off to its strongest start in decades. Sure, a look at classic metrics like price-to-forward earnings show valuations surpassed those at the start of the fourth quarter, but that may not take into account significant changes -- a Federal Reserve now on hold and lower rates.

“You would expect investors to pay a little more for owning stocks, and that is reflective here in the United States,” said Kevin Caron, a senior portfolio manager at Washington Crossing Advisor. “Lower interest rates tend to create less competition for asset returns, so investors will push more into equities, but not forever and not infinitely.”

It’s not the first time Buffett has made this assertion. Back in February, he told CNBC, “If you tell me that 3 percent long bonds will prevail over the next 30 years, stocks are incredibly cheap.” At that point, the S&P 500 had rallied 19 percent from its Christmas Eve bottom. That rally went on to grow to 25 percent before faltering over the weekend on trade concerns and Fed chair Jerome Powell’s “transitory” comments.

As will always be the case when it comes to valuation, much depends on the lens. While inflation-adjusted multiples say one thing, a handful of less fancy measures say something else. Take price-to-sales ratios or price-to-book measures for instance. Each of those show an S&P 500 hovering near valuation levels not seen since the early 2000s.

And while the interest rate model gets press as a way to gauge relative value, the method of comparing earnings yields to that of Treasuries isn’t accepted by all investment professionals. While the comparison worked well in the 1980s and ’90s, “that relationship kind of broke down a little bit” at the turn of the century, according to Caron. When it comes to stock valuations, “there’s no single right price and there a lot of things that factor into it,” he said.