AT&T (NYSE:T) continues to face strong pressures on multiple fronts and the END_OF_DOCUMENT_TOKEN_TO_BE_REPLACED

Over the trailing year, we’ve seen one of the most paradoxical developments END_OF_DOCUMENT_TOKEN_TO_BE_REPLACED

For the first time in a long time, concerns about inflation are END_OF_DOCUMENT_TOKEN_TO_BE_REPLACED

Authored by Joe Withrow via InternationalMan.com,

Eli’s mother was dying from cancer.

Eli is 33 years old. He owns a shoe store in Caracas, Venezuela. His mother has bone cancer.

Venezuela’s currency is the bolivar. It lost 62% of its purchasing power in February. (It lost 67% the month before that.)

That means prices for everything (food, water, and utilities) increased 62% over a month.

Eli couldn’t afford his mom’s medication. So he turned to bitcoin.

You see, Venezuela has capital controls on traditional safe havens like the U.S. dollar (more on that in a moment). That makes it hard for Eli to buy them.

So he buys bitcoins and sells them to a friend in Colombia – who won’t accept bolivars. The friend then buys cancer treatment and medical supplies for Eli.

Treating my mother’s cancer would have been very difficult without using bitcoins because my business is going bankrupt and I have a lot of debts, so bitcoins enabled me to stay afloat while our currency is collapsing.

Eli’s not the only Venezuelan using bitcoin to survive.

Arley is from the Táchira state on the border with Colombia. He said he buys drugs in Colombia with bitcoins… then resells them after legally importing them to Venezuela.

Things have gotten so bad that authorities are investigating the theft of zoo animals in the Venezuelan state of Zulia. Police believe people are stealing the animals and eating them. It’s another sign of hunger in a country struggling with chronic food shortages.

As you probably know, Venezuela is on the verge of collapse.

President Nicolás Maduro’s socialist government has eroded 99% of the bolivar’s value. That has created a humanitarian crisis.

Today, I want to show you how Venezuelans are fighting back—using bitcoin.

Venezuela has the highest inflation rate in the world at 741%. The Venezuelan bolivar is basically worthless. You can’t even buy a loaf of bread with a wheelbarrow full of them.

So it’s no surprise that Venezuelans are looking for alternative currencies. And the U.S. dollar is one of their favorites.

But the government has tight controls on currency exchanges. It restricts the number of dollars people can buy… and what they can do with them.

The government-controlled exchanges have created a black market for U.S. dollars.

The rising cost of black-market dollars—and tight government controls on their purchase—has pushed Venezuelans into bitcoin. 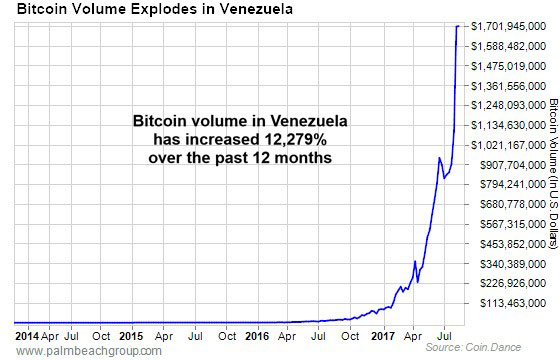 Venezuelans are using bitcoins to buy Amazon gift cards. They need to buy the gift cards so they can order goods and food from the online store in the U.S. and other countries. The goods are delivered by courier to Venezuela.

One Caracas-based bitcoin trader said, “Bitcoin is a way of rebelling against the system.”

We love bitcoin at the Palm Beach Research Group. Personally, I’ve been mining bitcoin since it was trading at $450 over a year ago.

Bitcoin is up 856% since we recommended it in April 2016. Despite those gains, we still believe it’s a strong investment.

But bitcoin is much more than that. It’s quickly becoming the world’s premier chaos hedge.

That’s why Venezuelans are turning to bitcoin. And they’re not the only ones.

In 2013, Cypriots hoarded bitcoin after the Cyprus government closed banks for a month… and confiscated 6–10% of account holders’ money to “bail in” the system.

And during Greece’s 2015 economic crisis, the government shut down banks for a month.

In both cases, Cypriots and Greeks turned to bitcoin. Bitcoin volume in Europe shot up 286% after the Cyprus bank closures. And bitcoin trades in Greece increased 79%.

As you can see, bitcoin has become a functional currency in real-world situations. That’s why it’s rising in value… and will keep rising.

I recommend buying a small amount of bitcoin every month. Remember, you don’t need to buy a full bitcoin… Just a fraction will do.

One day, you’ll be glad you did… I promise.