Billionaire Carl Icahn Is Bullish On Oil Stocks; Should You Be Too?

As Q3 earnings season kicks off, some top energy producers will come under investor scrutiny. Stakeholders will be looking for any sign of recovery after oil demand collapsed during the COVID-19 pandemic.

For long-term investors seeking value in beaten-down energy stocks, this could the right time to snap up some bargains in the sector.

While a slow and gradual economic recovery has boosted crude oil prices from the March dip, the lift is still not enough to resolve the deep demand/supply imbalances. Cars and trucks quickly returned to the road when officials lifted restrictions on movement this spring, sparking a revival in gasoline and diesel consumption. But planes have been slower to take back to the sky, hobbling sales of kerosene, or jet fuel.

Demand for passenger flights this year is likely to decline by more than half compared with 2019, the Organization of the Petroleum Exporting Countries (OPEC) said last week. Fuel consumption in the aviation sector won’t surpass pre-coronavirus levels until closer to 2025, the group said in its annual report on oil’s long-term future.

During the summer, the group moved ahead with the first hike in output. The next, additional two million barrels a day were expected to start flowing in January. Oil advisers in Saudi Arabia now say Riyadh is considering postponing the move until the end of the first quarter, according to the report.

Due to these depressing demand forecasts, the oil sector remains one of the worst performers during the pandemic. The Vanguard Energy Index Fund ETF (NYSE:VDE)—whose top 10 holdings include Exxon Mobil (NYSE:XOM), Chevron (NYSE:CVX) and Phillips 66 (NYSE:PSX)—remains down more than 45% for the year, even as the broader S&P 500 has recovered its losses from the March dip.

And if economic uncertainty weren't reason enough to stay way from energy shares, there's an additional hazard for buy-and-hold investors: uncertainty about the sustainability of dividends. A massive slump in sales this year has forced some of the largest gas and oil producers in the US to either freeze or slash their payouts.

In April, Royal Dutch Shell (NYSE:RDSa) cut its dividend for the first time since World War II, reducing its payout by 66%. Around the same time, oilfield services provider Schlumberger (NYSE:SLB) slashed its dividend by 75%, its first cut in at least four decades.

Exxon and Chevron are among those energy majors that have so far averted reducing their payouts, but that situation could change if the world sees another demand drop, or the alliance to control production and thus supplies among OPEC+ producers falters. 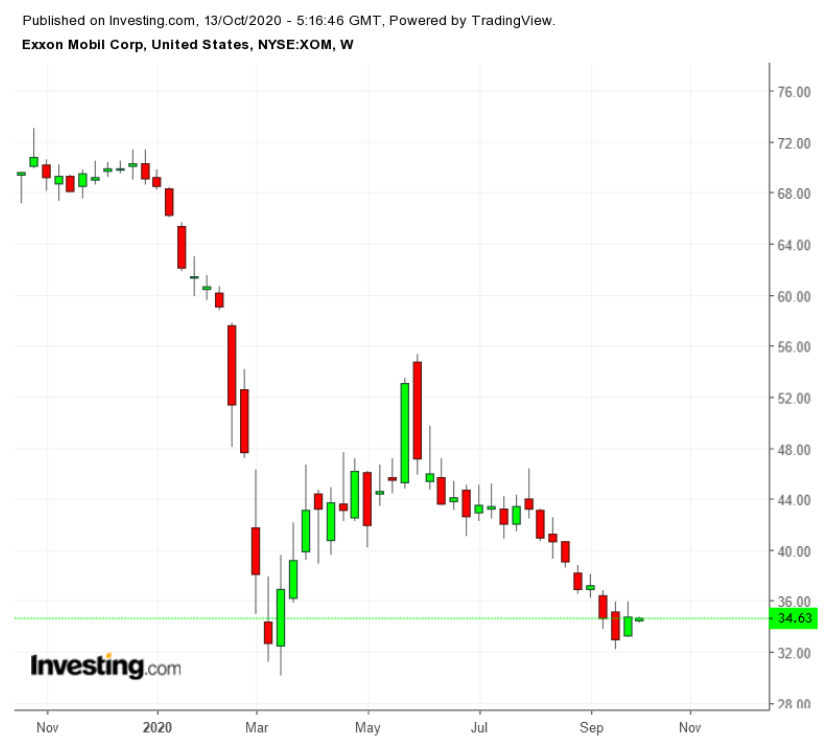 But not everyone is pessimistic about oil stocks. Billionaire Carl Icahn, who has made much of his fortune by betting on energy, says the battered sector is an attractive corner of the market.

Icahn has massive stakes in energy companies such as CVR Energy (NYSE:CVI) and Occidental Petroleum (NYSE:OXY). He believes that the shift away from fossil fuels toward renewable energy will take a long time and “it’s going to be a lot longer than people think.”

“Obviously, I’m not telling you to go out and buy energy stocks tomorrow, but … if you look back in three years, you might say ‘Geez, I could have bought those energy stocks,'” he said in a CNBC interview.

Despite these bullish views, investors generally remain bearish on energy stocks. Holdings of oil-and-gas stocks by active money managers are at a 15-year low, according to investment bank Evercore ISI.

Third-quarter earnings will provide another chance for investors to see if oil companies have seen the worst of the current downturn. That being said, we don’t believe oil stocks make a compelling investment case for retail investors.

Unfortunately, these companies are most exposed to negative headwinds, including from oversupply. Even if that situation improves in the short-run, the broader shift in the economy to embrace clean energy resources continues to remain an existential threat for these players.