As one of the market's most important income investment vehicles, AT&T (NYSE: T) has held within a clearly defined trading range for most of the last 20 years. Unfortunately, this mundane trading activity has deterred many investors from entering into new long positions associated with the stock and AT&T's elevated debt risks have only exacerbated concerns already felt by many in the market. However, solid levels of historical consistency in the company's stock valuations have also created significant trading opportunities for contrarian investors and T-Bulls could find a potential upside catalyst in the event that a decision to sell AT&T’s DirecTV assets can inspire a sustainable reversal in the underlying share price activity.

Furthermore, recent market declines below $30 per share have produced undeniable dividend yield opportunities (at 6.93%) and income investors must understand that these dividend yield figures remain close to the all-time highs for the stock. Overall, it’s not surprising to see that AT&T tends to find buyers at historical support zones that are relatively obvious, given the high trading volumes that are typically associated with the stock. Ultimately, this activity has created a trading range that is outlined in the previous price chart and risk-reward scenarios might favor a bullish outlook as long as income investors continue to obey these long-term historical tendencies.

Further evidence supporting an upside reversal in the stock can be found in AT&T’s price performances during periods of significant market uncertainty that have presented themselves over the last 20 years. In each case, the size of the total declines seen in the stock has diminished even while it could be argued that the severity of the broader macroeconomic disruption has increased. In addition to this, shares of AT&T have managed to find support at higher lows and all of this suggests that the stock’s long-term trading range is likely to remain intact going forward. If this positive analysis does turn out to be accurate, we can see clear arguments which suggest that upside potential far outweighs downside risk at current market levels.

One explanation for the stock's long-term price consistency comes from the fact that AT&T has managed to continue growing its dividend in spite of diverse instances of uncertainty that have emerged throughout the recent history of the financial markets. For these reasons, AT&T can only be described as a true Dividend Aristocrat that has proven its worth as a company capable of making consistent hikes in its dividend payouts (even during the market's most tumultuous periods).

Ultimately, this trend appears likely to continue given AT&T’s favorable dividend payout ratio and its monstrous ability to generate free cash flow over time. Of course, we should also note that certain investors might not be totally convinced of this positive outlook due to the current state of affairs in specific segments of its operations. Specifically, these problems can be exemplified in AT&T's inability to retain customers associated with its satellite services: 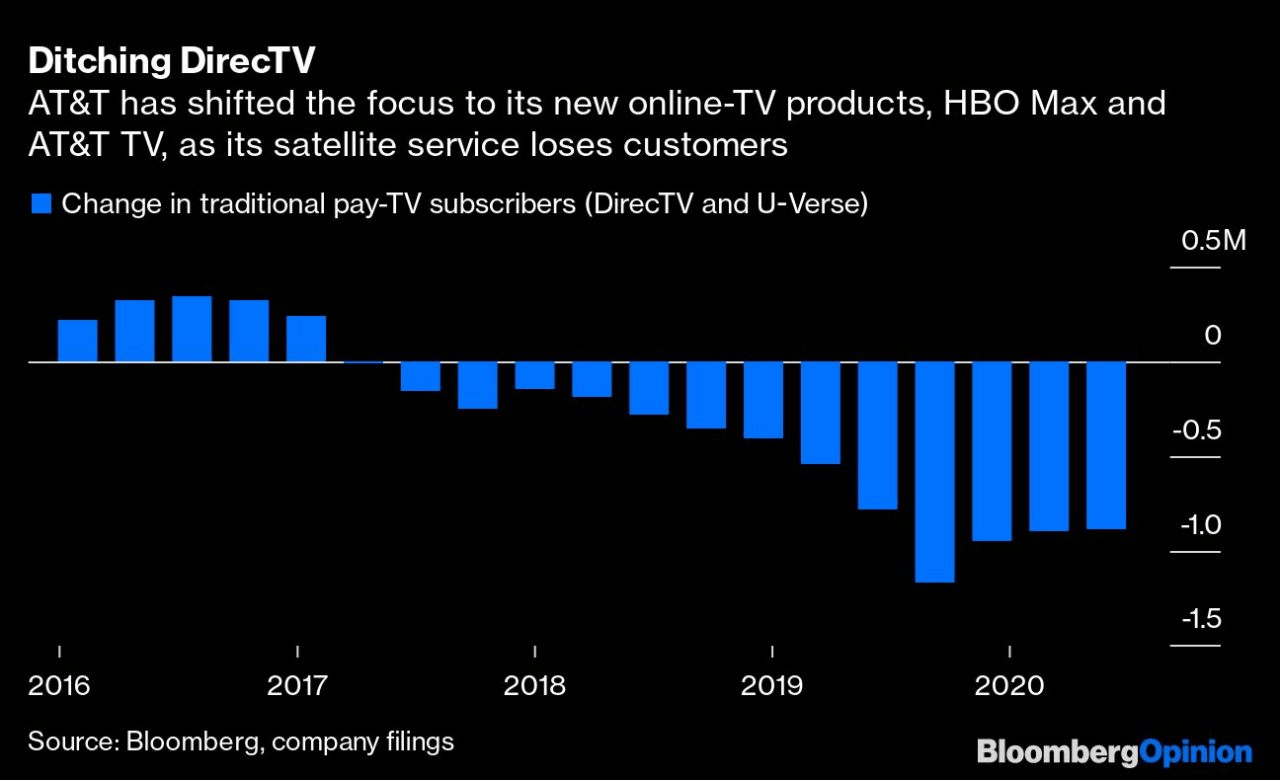 Fortunately, we could see the development of new bullish catalysts if the company is able to resolve its problematic issues with DirecTV (which has already lost billions of dollars since AT&T first made the ill-fated acquisition in 2015). During this period, AT&T has experienced sharp declines in the number of pay-TV subscribers associated with its U-Verse and DirecTV products, so it is likely that potential investors will need to see more clarity on this front before they can feel comfortable enough to establish new long positions associated with the stock. 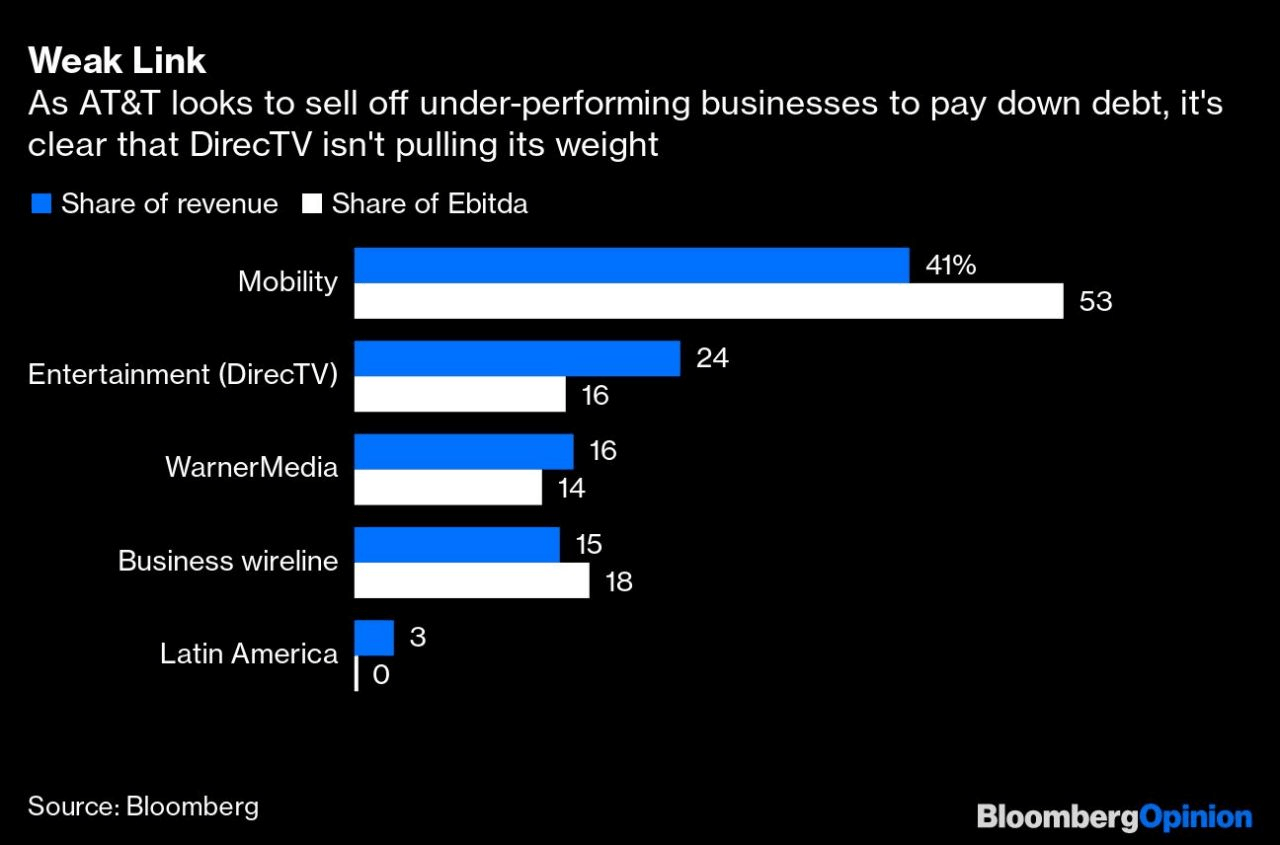 However, selling DirecTV would make it easier for AT&T to pay down its debt and give potential T-Bulls a better sense of security when buying the stock. This is because a decisive action would show that the struggling company has a clearer sense of how to move forward in this post-coronavirus world where so many customers are opting for cheaper streaming services like Netflix (NASDAQ:NFLX) and Hulu. So, even though AT&T paid $49 billion for DirecTV in 2015, a potential sale price of less than half that figure could still be beneficial if the decision works as a bullish catalyst for the company and leads to a strong reversal in the stock’s underlying share activity.

Additionally, T-Bulls should note recent trends in the figure that marks AT&T’s net long term debt relative to the company’s total assets (which currently stands at 24.74%). For investors with a primary focus on income potential, these factors support the argument that there is a sustainable measure of safety that is capable of protecting the stock's superior dividend yield going forward. For these reasons, potential T-Bulls are likely to maintain a favorable investment position while the stock is still holding within the lower boundary of its multi-decade trading range.