AT&T: Outflanked By A Peacock

Over the course of a couple of months, HBO has given up an unthought-of lead in the video subscription market when AT&T (T) bought Time Warner back in 2016. The deal was based in part on the potential for HBO to take on Netflix (NFLX) in the streaming world, yet the service has just now been surpassed by the remaining legacy media company to not have already officially launched an SVOD service. AT&T continues to prove that a conglomerate of businesses doesn't work and the stock is stuck at the current levels until the company aggressively alters their SVOD plans.

Last week, NBCUniversal (CMCSA) officially announced the launch of Peacock on April 15 for existing Comcast subscribers. Not only is the service going to officially launch before HBO Max, but also the service will offer ad-supported models to lower the overall cost for viewers and increase viewing times.

At their launch event, WarnerMedia discussed plans for an ad-supported model sometime in 2021. The media company failed to innovate with the launch of HBO Max whether via the timing or the pricing model allowing NBCUniversal to show up late to the game and suddenly provide the most optimal service for a legacy media company with 10,000+ hours of content.

Consumers not willing to spend $10 to $15 per month on Peacock or HBO Max can now watch about half of the Peacock content for free via watching ~5 minutes of ads per hour. NBCUniversal will monetize the premium content without forcing customers to pay a large monthly fee in an all or nothing scenario.

Peacock expects to match the 35 million customers of HBO Max by 2024, but the ad-supported model should allow Peacock to quickly reach higher active account numbers. Consumers have no reason to not create a streaming account to view the Olympics or any of the other free content.

Again, this makes no sense for AT&T to have bought HBO for a premium valuation to completely lose the SVOD leadership position before even launching their full Warner library in May.

Losing Out To Apple

One of the biggest problems with parting ways with former HBO CEO Richard Plepler was the likelihood he ended up at a competitor. Recently, Mr. Plepler inked a five-year production deal with Apple (AAPL) TV+.

He was highly praised for making HBO a leader in premium content and another prime example of how HBO has failed to retain its leadership after the merger. The additional deal by Apple with Julia Louis-Dreyfus can be seen as another potential hit to HBO considering Plepler had signed her for the Veep series.

The launch of HBO Max couldn't be going any worse. Apple continues to load up as a major threat in the next five years, Comcast and Disney (DIS) are hitting all-time highs in excitement over the launch of their innovative services that will drive subscriber growth.

Sensor Tower has the Disney+ app reaching 31 million subs during Q4 to lead the market. Disney+ doubled the downloads of TikTok and YouTube (NASDAQ:GOOG) (GOOGL) and Netflix were top downloaded apps in the quarter. 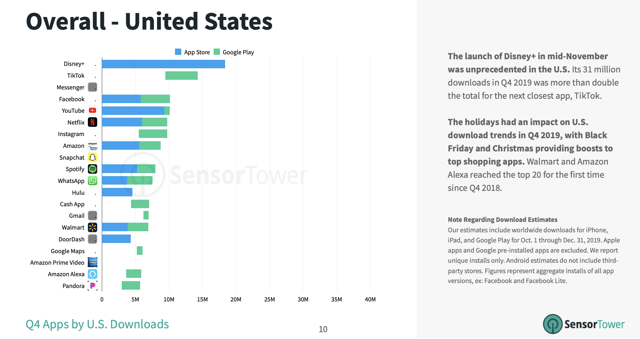 Another example of how AT&T is treading water while the video streaming sector is full speed ahead is the Disney+ news on Western Europe. While HBO Max is slowly inching towards an eventual U.S. launch in May, Disney+ rushed forward a Western Europe launch to March 24. The company expects to launch in key countries like the U.K., Germany, Italy and Spain.

AT&T already has 34 million domestic subscribers to HBO. Apple is new to the content world and Disney and NBCUniversal are new to subscription services. All have intentions of reaching the current level of HBO in the next few years and possibly topping the 50 million target of HBO Max by 2024.

Since these services are all additive to the current business models minus content deals with Netflix (NFLX) where revenues are lost to reclaim licenses, the market is rewarding all of these stocks with gains. Since the Time Warner deal to make AT&T a leader in the SVOD space and to prepare for this day in 2020, the stock is the worst performing in this group by far. 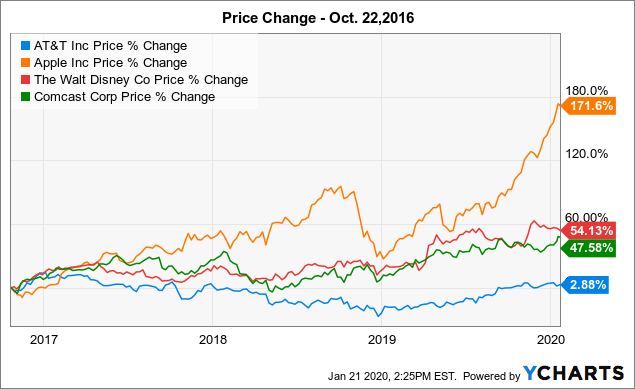 AT&T has fretted away a lead amongst the legacy media giants to where HBO has no discernible advantage over the other companies. Even worse, the legacy subscription model apparently has AT&T tied to collecting the $15 fee to the detriment of the service with the company unwilling to cut the fees from existing deals.

The end result is that HBO should already have a service on market, yet the company is technically last to market with their full content library. Until the current AT&T management team innovates with a plan to recapture a leadership position in either the streaming video segment or 5G with competitors like Verizon Communications (VZ) and T-Mobile (TMUS), the stock will disappoint. All of the other stocks in the media segment have hit new all-time highs recently.

AT&T is now the cheapest stock, but the upside remains around current prices until the company innovates in media or entertainment. AT&T has a forward EV/EBITDA multiple of 7.5x while the most comparable stock in Comcast is an 8.8x multiple. A similar multiple would place the stock closer to my $42.50 target. 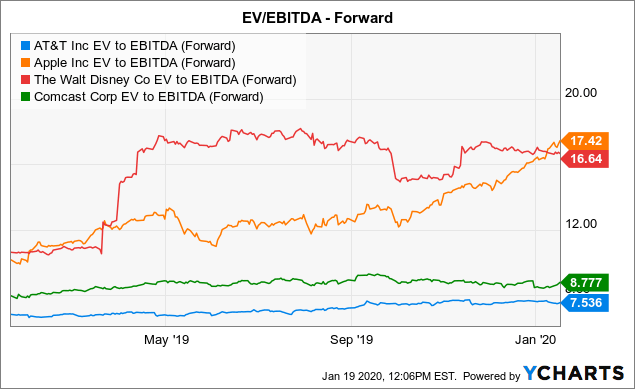 The key investor takeaway is that AT&T management continues to fret away a leadership position in the SVOD market. My investment thesis remains slightly bullish due to the valuation and the solid 5.4% dividend yield, but the company continues to waste a valuable set of underutilized assets in the process.