AT&T Investors Should Expect A Higher Dividend Increase This December

AT&T (T) has been considered a solid, defensive income stock for decades. This company has seen a lot of history - from aggressive growth to a split-up of the company and back to renewed consolidation. Through it all, it has created shareholder value, both by way of dividends and by way of an increasing stock price. 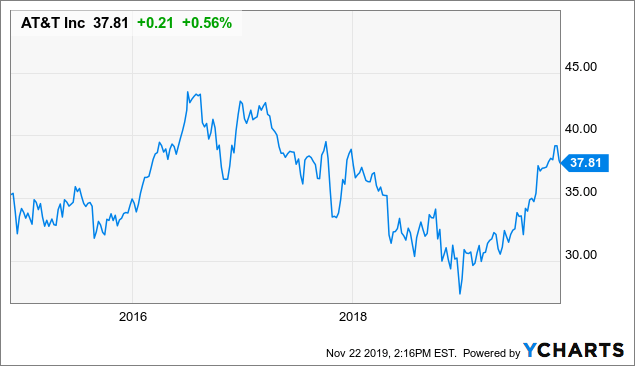 Over the last five years, the stock has risen from $35.38 to $37.81 for an unimpressive total appreciation of 6.9%. The bulk of the return, therefore, has come from the dividend which has yielded around 5-5.5% during the period. The total shareholder return has clearly underperformed the market as a whole.

As mentioned, this company has increased its dividend for 35 consecutive years and is bound to continue that streak going forward. There's no question about the dependability of the dividend raises. However, I along with many other dividend growth investors would like to have seen a higher growth rate of the dividend. Over the last couple of years, the raises have just about compensated for inflation - nothing more.

On the other hand, if you're an income-focused investor, you get pretty much exactly what you want from AT&T - namely a high current yield and an annual growth of the dividend which more or less compensates for inflation over time. There is also virtually no risk that the dividend will be cut. So if you're an income-focused investor at or near retirement, this stock is very attractive. It's certainly much more attractive than most bonds. I would argue that many high-yield bonds with comparable yields to AT&T are riskier in addition to the fact that the yield doesn't grow over time. 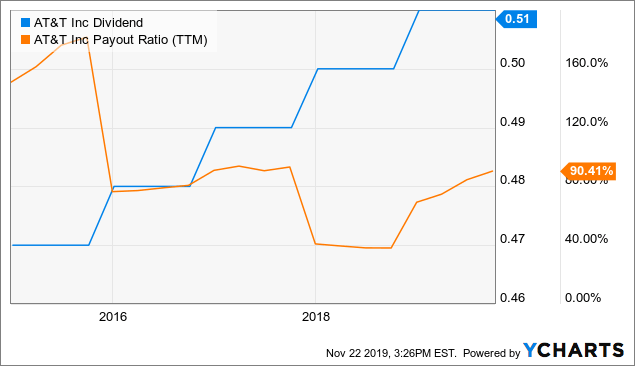 As we can see, the dividend is rising like clockwork every year. The payout-ratio, however, is much more volatile and has at times been way above 100%. Such levels are certainly not sustainable over time. Since early 2016, though, the ratio has at least stayed below 100%. That said, earnings are often impacted by one-off items and it is thus a little bit dangerous to look at reported earnings and the resulting payout ratio every quarter. The current payout ratio of 90% certainly looks too high for comfort, but if we instead look at cash flows, I see less reason to worry.

When the company announced its last dividend in September, it highlighted its strong cash flows and the solid dividend coverage for 2019. The dividend payout ratio as measured against cash flows, not earnings, were 50.6% in the first half of 2019 as compared to 77.3% in the first half of 2018. Guess the Time Warner acquisition helped push down that ratio to a more comfortable level.

In short, I am not worried about the payout-ratio. There is no risk of a dividend cut - the importance of the dividend was very much highlighted by management in the latest announcement. Furthermore, there is ample room for dividend increases currently, even without much earnings growth. AT&T investors can rest easily.

It's easy to think of AT&T as a telecom company. But in fact, it is much, much more. And I'm not only thinking about the acquisition of Time Warner. This company has been acquiring companies for decades and after the Time Warner merger owned 98 companies. This naturally makes it more diversified, which in and of itself reduces the risk of the dividend being cut as earnings will be stable.

In addition - by controlling so much of the value chain, the company has a lot more strings to play by, for instance, bundling services, or by increasing its pricing power by producing premium content delivered through its own network. You could imagine special HBO streaming deals for AT&T cell plans in order to get more customers to try out your whole suite of services. In short, there's more diversification, there are cost synergies and revenue synergies by controlling so much of the value chain.

I am fairly confident in the ability of this stable behemoth to generate inflation-beating earnings growth over the long term - thereby setting the stage for increasing dividends over time. I would argue though, that it's a good thing the payout ratio has come down over time, especially since there are a lot of moving parts in the different aspects of its business at the moment. Only last week, the Economist had an article about the media wars. There's massive investment from the likes of Netflix (NFLX), Disney (DIS), and AT&T's own HBO. On the other side of this war, some of these will emerge as the big winners with massive cash flows and pricing power. But some will end up having invested billions and never getting a return. AT&T, therefore, needs to retain a good chunk of cash for continuous investment in great content.

As for the dividend, we do have a very stable history in terms of dividend increases. Ever since 2009, this company has increased the quarterly dividend every year by $0.01. Over the last 10 years, the company has increased its dividend by an average annual rate of 2.2% - just about what inflation has been. Safe to say, I am very confident that the Board will at the very minimum announce a dividend increase of $0.01 this December. The interesting question is: Will this be the year they start hiking it by $0.02? There are several arguments to be made for that.

First of all, this is the first full year of Time Warner being fully integrated into AT&T, making it a significantly larger and more robust business. Second, a one-cent increase is not the same percentage-wise as it was a decade ago. Third, the payout ratio is low enough now that the Board can go for a higher dividend growth rate and still retain a low pulse. A two-cent increase would mean a percentage-wise increase of 3.9% - hardly outlandish. By its own estimates, this would mean an increase in the payout-ratio from 50% to 54% if we assume no earnings growth next year. If the company achieves a modest growth rate of 4%, the payout ratio will actually fall. This might also be a good story for the Board - "During this demanding acquisition period we didn't have much capacity to increase the dividend, but now we are reaping the synergies of the transaction and are duly rewarding our shareholders with a higher dividend growth rate."

My prediction for the new quarterly dividend is thus $0.53, representing a growth rate of 3.9%.

Even though the company is huge and diversified, there are obvious risks. There is fierce competition within the media space. HBO is investing heavily in content whereas the TV stations have to grapple with a new media reality. Within the telecoms space, there is more of a duopoly but still quite hard price competition, not least from the smaller challengers such as T-Mobile (TMUS). Even though the Time Warner acquisition went through relatively smoothly, there is certainly a risk, especially if a less than business-friendly candidate wins the White House, that there will be antitrust lawsuits. Finally, technological development constantly changes the business landscape, threatening to make many of AT&T's products and services obsolete if they can't keep current.

So, now that we know about the business, its strengths and weaknesses, growth potential and dividend, how much do we have to pay for this? As it turns out, not too much.

Below, I'll look at some key metrics for AT&T and compare it to some of its competitors. As peer group I've chosen the two closest telecom competitors in the U.S. market, namely Verizon (VZ) and T-Mobile.

On the Price/Sales ratio, AT&T and T-Mobile are priced similarly with Verizon coming out as the most expensive one. It's a bit more spread when we look at Price/Earnings. AT&T is by far the cheapest one with a ratio of 10.4x. Verizon comes in second place and T-Mobile loses the contest with a comparatively high ratio. When we look at the dividend, AT&T wins once again with its truly massive 5.4% yield as compared to 4.1% for Verizon and no dividend at all from T-Mobile. If there's one company to buy in this space, it's AT&T.

The analysts on Wall Street are expecting AT&T to produce an average annual EPS growth rate over the next five years of 3.8%. If we assume no increase in the already conservative earnings multiple and add in the dividend yield of 5.4%, we arrive at an average annual expected shareholder return of 9.2%. Certainly, nothing to make a FAANG investor excited, but quite respectable, indeed, for such a large, diversified and stable company. It's about what you can expect from the market as a whole over time, only you get a much higher yield.

AT&T is a good investment at the current price and is especially well suited for income-oriented investors who are looking for a high and safe current income which will rise slightly more than inflation over time.

AT&T has been the dividend investor's friend for many decades. Through recessions and expansions, growth, split-up and consolidation, this company has delivered quarterly dividend payments all along. Now the company is larger, more diversified and more profitable than ever. Investors can look forward to a nice dividend hike this December that will further bump up the already high dividend yield. AT&T is a buy for conservative dividend investors prioritizing high current income, coupled with the prospect of being more than compensated for inflation over time.