Apple: Most Expensive Valuation In A Decade

On May 13th, 2016, I wrote a public Seeking Alpha article stating that Apple (AAPL) was trading at its cheapest valuation in a decade. The total return for AAPL shares since that article's publication was over 415%, with the S&P 500 Index up roughly 62% over this time frame.

More recently, I have turned somewhat bearish on AAPL shares, especially as the company has continued its climb towards the $2 trillion market capitalization mark.

Alternatively, you could say I cashed in at a decent time, given the broader stock markets seemingly parabolic rise from its March 23rd, 2020 lows, which has been led by the largest market capitalizations stocks, including Amazon (AMZN), Microsoft (MSFT), Alphabet (GOOGL), (GOOG), Facebook (FB), and of course, Apple.

Whatever logic you subscribe to, I think it is a perfect juncture to take a bite out of Apple shares on the short side again.

I feel this way for three reasons. First, the company's sheer size and elevated price-to-sales ratio is going to make it hard to grow robustly going forward, secondly, on a broader valuation basis, shares are no longer cheap, like they were in May of 2016, and third, market participants are using the leading growth stocks as a bet on continued disinflationary pressures amdist the COVID-19 pandemic, yet some combination of a vaccine, treatments, or herd immunity is likely to usher in a historic capital rotation towards value equities and economically sensitive equities.

Apple's Sheer Size Is A Headwind

Breaking this down further, that $174 billion gain in market capitalization, if ascribed to one company, would make that hypothetical company roughly the 35th largest company in the SPDR S&P 500 ETF (SPY).

Again, for perspective, Apple gained roughly the amount of market capitalization in a single day, that some of the largest companies in the S&P 500 Index have taken lifetimes to build.

Overall, AAPL shares now compromise roughly 6% of the S&P 500 Index (SP500), and with Friday's move, they should surpass Microsoft as the venerable index's largest holding, which will be mirrored in State Street Corporations (STT) SPY product.

The problem with being this enormous, is that Apple is going to have a hard time growing revenues, profits, and cash flows at a rate that make a material impact on the overall size of the enterprise.

Building on this narrative, at a trailing-twelve-month revenue run rate of $274 billion, Apple is selling at a 7x revenue multiple for the past twelve months, and revenue has not really grown at all from 2018's annual levels ($266 billion).

On this note, given this price-to-sales multiple, we have to remember what Scott McNealy, the former CEO of Sun Microsystems said about his company trading at a 10x revenue multiple at the peak of the dot-com bubble era.

Now Apple is not Tesla (TSLA), which sports a price-to-sales ratio over 10 (though to be fair to Tesla, revenues could surge higher on higher vehicle volumes), however, with Apple's revenue growth already slowing to a crawl, and the sheer size of Apple's revenues being so large, it is going to be hard to grow revenues and profits to simply maintain the company's stock price anywhere near today's levels, let alone grow it, at least in my opinion.

Remember, we just established that Apple shares are trading for almost a 7x price-to-sales multiple, with very little revenue growth the past two years. Building on this narrative, the valuation table image below, with underlying data from Morningstar (MORN), is taken directly from my May of 2016 public article. 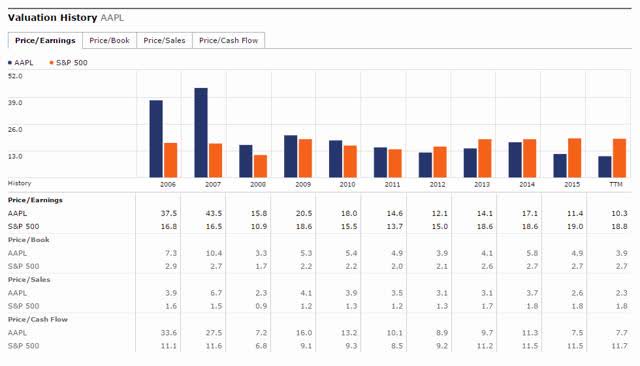 Given these extended valuation ratios, it should be no surprise that Morningstar had a $285 fair value target on AAPL shares as of July 31st, 2020, which is a tidy 32.9% below Apple's recent closing price.

Growth Stocks Could Be Hurt In A Capital Rotation

This flat-line in growth is decidedly different than their large-cap growth peers. On that note, an analyst can say whatever they want about Alphabet, Amazon, Facebook, and Microsoft, and some of these companies are ridiculously overvalued too, in my opinion, however, at least these companies are firmly growing revenues.

Building on this narrative further, we know that growth stocks have outperformed their value counterparts for the better part of 13 years now. 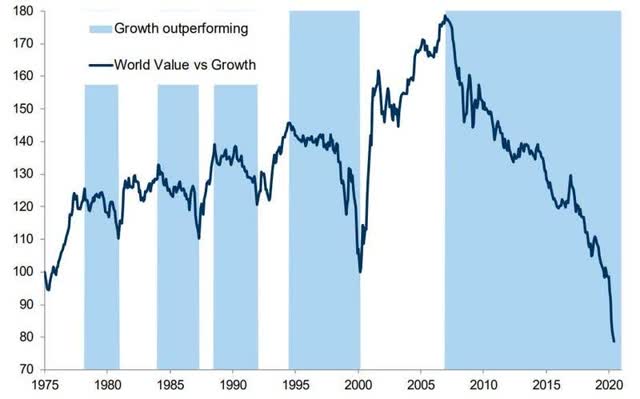 This outperformance has grown amidst the COVID-19 outbreak, with growth stocks actually less sensitive to asset manager's modeled COVID factors than their value peers. 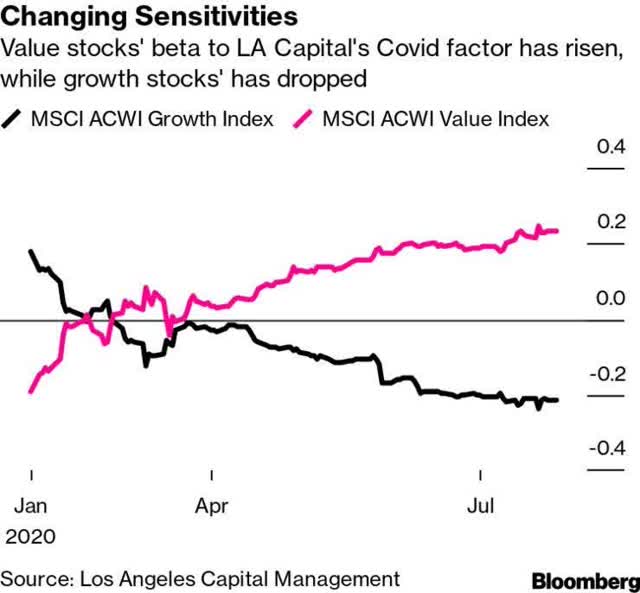 This makes sense as many of the leading growth stocks like Amazon, Netflix (NFLX), and Shopify (SHOP) have actually benefited, on both a relative and absolute basis, from the lifestyle changes that COVID-19 has engendered.

Apple has fit firmly into this camp, with shares making new all-time highs, as they have gotten a revenue boost from more employees working from home, and the resulting technology spending.

The fly in the ointment here is that Apple is really not a growth stock these days, even with their recent quarterly earnings that came in better than expectations, so it has been lumped in with the positive leading growth stock beneficiaries of the COVID-19 pandemic, yet Apple has not yet seen a commiserate, sustainable boost in their business, at least on the same percentage terms as some of their peers.

For example, Amazon is Apple's closest peer in terms of market capitalization, and Amazon reported earnings on the same day as Apple, and the company topped their consensus revenue estimates by roughly 10% for the second quarter of 2020, showing overall revenue growth of 40% year-over-year that dwarfed their larger capitalization rival, with Apple reporting 11% revenue growth year-over-year.

Closing Thoughts - Apple Is A Terrific Company That Is Significantly Overvalued

Back in May of 2016, I could not say enough good things about Apple's stock from a value perspective. Today, with Apple's price-to-sales, price-to-earnings, and price-to-book multiples all significantly higher than they were in 2016, and with the company showing a lack of revenue growth the past three years, I am much more skeptical on shares.

With Apple shares climbing even higher in the summer of 2020 than they were earlier in the spring of 2020 before the COVID-19 outbreak, I think now is the ideal time to use a short position again in Apple shares as a hedge against a broader market decline. This hedge serves dual purposes for me personally, which are protecting my long positions, and guarding against a capital rotation where in-favor stock like Apple are sold, and out-of-favor stocks that are undervalued, like Antero Resources (AR) that I profiled recently here, appreciate.

Given how overvalued Apple shares are today compared to where they were in 2016, with Apple now selling for its most expensive valuation in a decade versus is cheapest valuation in a decade back in May of 2016, it is also possible that Apple's common stock underperforms the market, and even declines on an absolute basis, irrespective of the broader markets overall direction.

The possibility of outright declines in Apple's common shares seems farfetched now, with the afterglow of Apple's recent multi-year bullish performance fresh in investors' minds, however, we only have to look back to the first half of 2016 to see an environment where Apple's stock was out-of-favor.

Shares do not have to go all the way back to their May 2016 levels of $90 per share for current Apple investors to suffer, as simply going back to Morningstar's fair value target of $285 would imply an outright decline of roughly 33% below Apple's closing price on Friday, July 31st, 2020.

Wrapping up, without a doubt, Apple has been one of the most remarkable growth stories in U.S. business, particularly over the past two decades. Personally, over the last decade, I have owned Mac's, iPod's, iPad's, iPhone's, and Apple common shares, so you could even say I am a connoisseur of Apple's products.

Common shares have appreciated by roughly 500x from their 2000-2002 lows, propelling Apple to become the largest market capitalization stock in the world. Whether you own Apple shares outright or not, most investors have an implicit stake in the company, because Apple has a roughly 6% weighting in the S&P 500 Index and a roughly 12% weighting in the Invesco QQQ Trust (QQQ).

The significant weightings in benchmark indexes are a result of historic run of growth, and many traders front running valuation insensitive and price insensitive index/ETF buying, however, Apple's revenue growth has slowed and stalled, and its once formidable free cash flow yield (the company generated over $66 billion in FCF in the past twelve months) has shrunk to under 4% as its market capitalization has ballooned. Apple remains a fine company, just an expensive one on a valuation basis, and this poor valuation starting point is a recipe for poor future stock returns.