Last year was probably the toughest in recent history on airline stocks. END_OF_DOCUMENT_TOKEN_TO_BE_REPLACED

GameStop (NYSE:GME) is up 85% over the past month through June 8. END_OF_DOCUMENT_TOKEN_TO_BE_REPLACED

Technology as a sector still looks like a buy after a recent rebound, but one chip stock stands out in particular.

Let’s take a look at why, and how AMD stacks up against competitors.

Advanced Micro Devices designs central processing units (CPUs) and graphics processing units (GPUs) used in data center servers, PCs and videogame consoles. That makes it a play on two of the biggest trends in tech right now — migration to the cloud and videogame hardware. Historically, the company lagged Intel Corp. INTC, +0.67%. But it has now surpassed its rival because of innovative chip designs and manufacturing issues at Intel.

Over the past few years, AMD has rolled out highly competitive lines of chips, thanks to the leadership of CEO Lisa Su, who took the helm in 2014, says tech analyst Peter Karazeris at Thrivent. This put AMD back in the game. AMD’s EPYC series of processors for servers has been endorsed by broad usage among the main cloud providers — including Amazon Inc. AMZN, +2.09%, Alphabet Inc. GOOG, +1.21%, Microsoft Corp. MSFT, +1.44%, Oracle Corp. ORCL, -2.63% and Tencent Holdings Ltd TCEHY, +1.38%. AMD’s Radeon GPUs for gaming hardware and its Ryzen line of chips used in PCs and laptops are equally successful.

Besides better chip design, AMD has pulled ahead by drawing on advanced manufacturing capabilities of Taiwan Semiconductor Manufacturing Co. Ltd. TSM, +0.95%, which can pack more punch in chips through the use of smaller, 7 nanometer transistors. Intel is stuck back at 10 nanometers.

Here’s the upshot in all of this: AMD is a solid play on the megatrend of cloud computing and the related data center buildout. It’s a bet on the increasing complexity of artificial intelligence and big data analytics. And its GPU chips give Nvidia a run for the money. That makes AMD a play on the new Xbox and Sony PlayStation console upgrade cycle and the potential release of a new Nintendo Switch later this year. AMD is also now a serious contender in PCs and notebooks.

“Our goal at AMD is to really be the leader in the high-performance computing wave,” says Su.

She’s getting her way, and you can see the success in the numbers. First-quarter sales grew 93% year-over-year and 6% sequentially. AMD guided for 50% sales growth for the year, up from prior guidance of 37% growth.

“We believe this guidance should be easily attainable, particularly as Intel deals with manufacturing challenges,” says Morningstar analyst Abhinav Davuluri.

In CPUs, sales are growing faster than those of the overall industry, which tells us AMD is gaining share from competitors.

“We expect continued share growth through the balance of the year and into 2022,” says Goldman Sachs analyst Toshiya Hari, who has a buy rating and a $106 price target on AMD. The chip company is on Goldman’s “conviction list” of highly favored companies.

Here’s how AMD stacks up against competitors in terms of growth in the most recent quarter, profit margins and valuation:

Big cash positions and solid cash flow are positives for investors because they give companies freedom that comes from reliance on banks for financing. Strong cash positions also support investor-friendly moves, such as buybacks and dividends.

Thanks to all the growth, AMD’s cash position rose sharply last year to $2.3 billion, from $1.5 billion in 2019. AMD doesn’t pay a dividend, but its board recently approved a large $4 billion share repurchase. As the company’s first big return of cash to shareholders, this represents about 4% of AMD’s market capitalization. It also signals the company’s confidence in its business and ability to continue generating solid free cash flow despite rising concerns about intensifying competition, says Deutsche Bank analyst Ross Seymore.

Here’s a look at AMD’s cash position and cash flow growth, relative to competitors. The numbers for Marvell Technology Inc. MRVL, +2.88% are through Jan. 30, 2021. The rest are for the first quarter:

AMD books sales in many regions. That’s a positive when global growth is as strong as it is now — lifted by $30 trillion in fiscal and monetary stimulus worldwide. Big exposure to China could be a risk because of U.S.-China tensions, but this issue seems to be diminishing a bit under President Biden, at least so far. 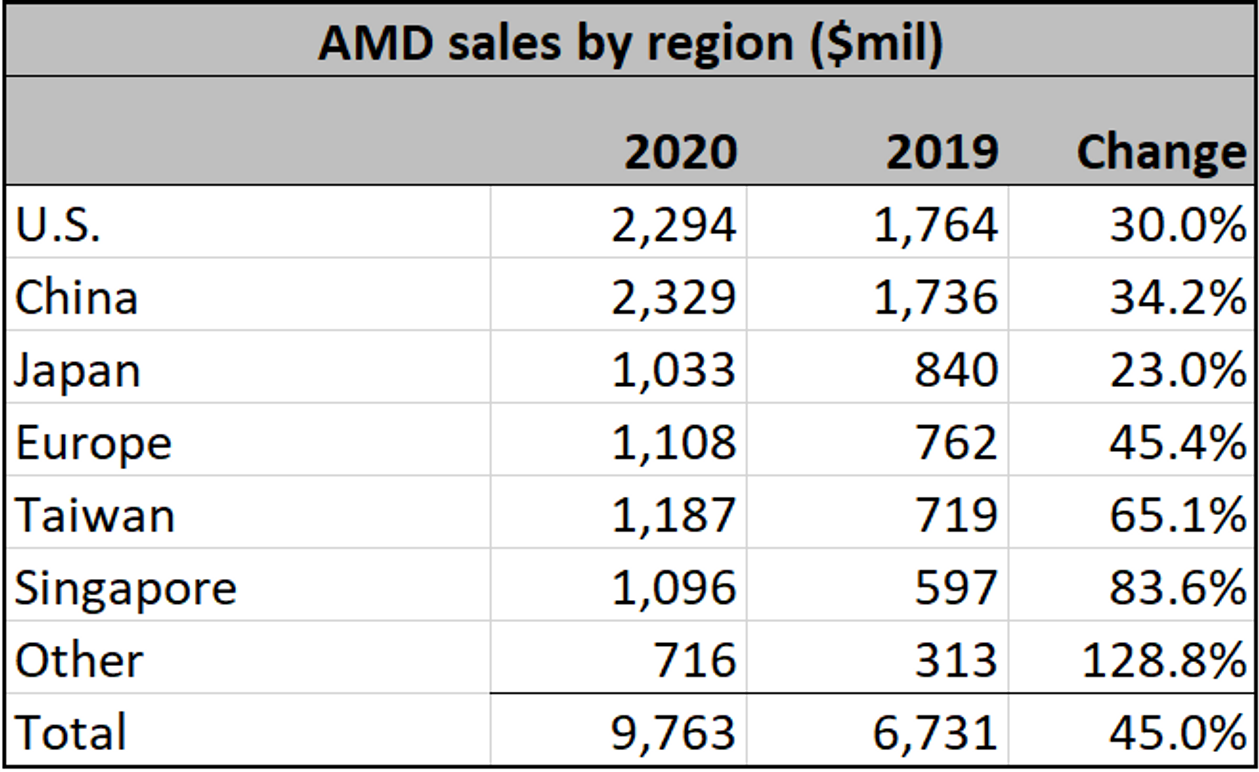 By most measures, AMD is the second-priciest stock in its group. But given the growth, it’s justified.

As a group, Wall Street analysts are predicting the biggest gains for AMD, among all the companies in its space. It’s also notable that only 61% of analysts have a buy rating, lower than the percentages for Nvidia, Broadcom Inc. AVGO, +1.02%, Marvell and Analog Devices Inc. ADI, +0.58%. For investors, this is a positive because it tells us there’s more room for sell-side analysts to turn bullish and drive their clients into the name.

One big risk for AMD is that Intel stages a comeback, notes Tony Wang, a tech analyst at T. Rowe Price. Intel has done so before. But AMD still has a few tricks up its sleeve.

It recently launched a more advanced version of its EPYC processor, codenamed Milan. This line of server chips will ramp up sales in the second half of this year. AMD is making the leap to even more efficient 5 nanometer production with a line of chips dubbed Genoa, slated for release in 2022. These two rollouts will allow AMD to continue its market-share gains against competitors including Intel, says Jefferies analyst Mark Lipacis — one reason he has a “buy” rating and a $110 price target on the stock.

AMD is also rolling out next-generation GPUs based on its Compute DNA (CDNA) chip architecture, for use in data centers. And AMD’s merger with Xilinx Inc. XLNX, +2.26% later this year should help AMD produce even more sophisticated chips by incorporating Xilinx’s field-programmable gate array (FPGA) capabilities into its chip designs. FPGA gives customers more leeway to customize chips for their own needs.

Other risks include the cyclical nature of the chip industry and the unpredictable demand from consumers and companies as economic growth rates change. One more threat is the broader adoption of competing chips based on ARM (advanced RISC machines) technology.