Altria: Something Is Wrong

Tobacco stocks are generally safe havens during times of crisis, in exchange for some underperformance during raging bull markets. They also tend to pay strong dividends with reliable earnings streams, making them attractive to income investors and those seeking to take less risk with their portfolio.

Altria Group (MO) has been a wealth compounder for decades with its world-beating dividend increase streak and reliable earnings. However, structural impediments to future growth and failed investments in new growth attempts make it seem like something is going on at Altria, and not in a good way. 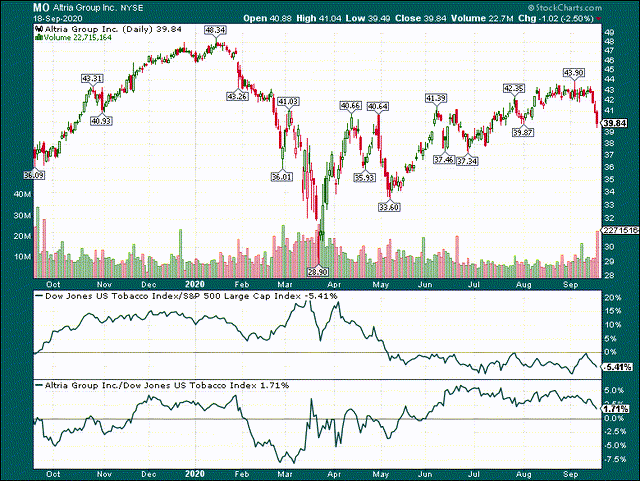 We can see above that tobacco stocks in general have been weak against the broader market in recent months. There was a brief period of outperformance during the initial panic, but since then, the group has underperformed massively. I happen to think the pullback we’re in for the broader market is temporary and that we’ll see a rally into earnings season, so it is my view this underperformance is going to continue for the tobacco stocks. But even if I’m wrong about that, Altria is way too risky.

From a conceptual perspective, Altria has the perfect product. After all, its customers are literally addicted to the product. The idea is pretty simple; mass produce as many cigarettes and related products as you can, as cheaply as you can, and sell it to people who have little choice but to buy it. This scale has worked very well for Altria over the years, but there is sufficient evidence to suggest those halcyon days are a thing of the past. 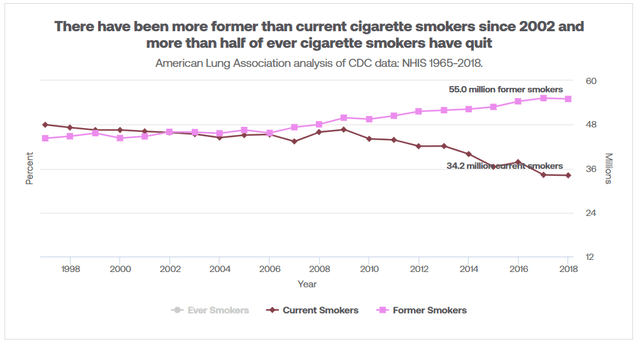 Data from the American Lung Association shows that the rate of current smokers in the US has been in steady decline for many years. Smoking socially has been banned in many types of establishments where it was once accepted, and with consumers – particularly younger ones – becoming more health conscious, there isn’t a lot of room for cigarette smoking these days.

There were ~48 million smokers in the US in 2009 and today, it is ~34 million. That’s a huge decline in Altria’s potential customer base, and the story is largely the same in international markets. There are fewer people smoking today, as well as fewer people starting to smoke, and the declines are significant. Given that scale is the name of the game in tobacco, a rapidly-shrinking pie isn’t good for anyone. 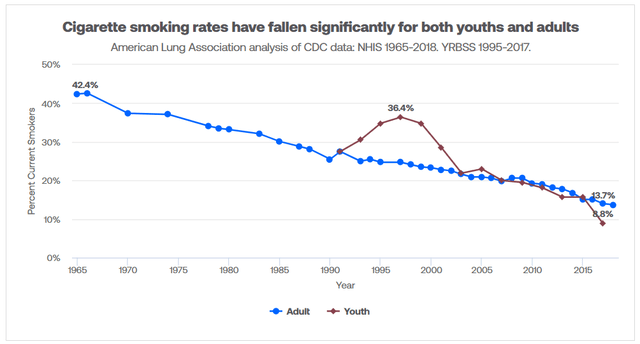 The longer-term view is even worse for Altria and its competitors, as smoking rates have plummeted in the past few decades. I won’t reiterate the same point I’ve already made, but this shows the sheer magnitude of the problem, and how many people are eschewing smoking, particularly in the younger age groups where lifetime customers are made.

Not only is the customer base shrinking at what should be an alarming rate for Altria, but the customers it does retain are smoking less. 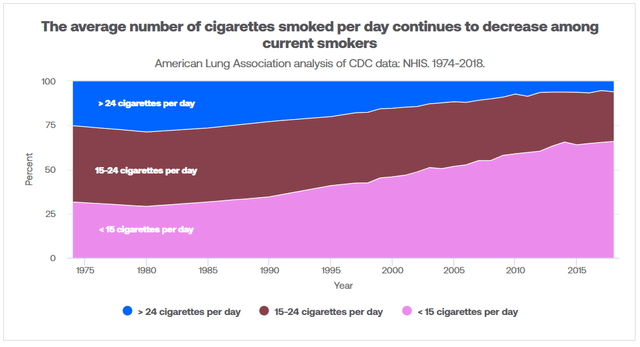 The number of smokers smoking more than 15 cigarettes a day used to be ~70% of smokers. Today, it is about 30%. That means that volumes are seeing a double-whammy of a smaller customer base, and a customer base that uses less per person. This is a very obvious structural decline in a market and given there are fewer and fewer places people can smoke in public, I have to think these declines are going to continue for a long time.

Every one of these has been an unmitigated disaster for Altria as it has burned through literally billions upon billions of dollars throwing money at desperate attempts to diversify away from tobacco. Diversifying away from tobacco makes a lot of sense, but the ways Altria has attempted to do so have been awful.

The Dividend Is Telling You Something Is Wrong

One nice thing about income stocks is that you can use the current yield, compared to historical yields, as a barometer for the valuation. In addition, when the yield moves up too much, it is generally a sign of distress and a warning to investors that the market is pricing in dividend weakness or, at worst, a cut.

Below, we have a handy chart of five years of Altria's yields to give us an idea of where we are on the spectrum.

As we can see, the news isn’t good. The stock spent years under 4% current yields as earnings and the dividend were growing. Investors bought the stock to grab that nice yield and continue to collect their rising payouts for years to come. The payouts have continued to rise, but the stock has been pummeled for all the reasons I laid out above.

The current yield is 8.5%, which is more than double Altria’s normal yield. Ordinarily, investors would see a yield like this and salivate while they ran to their brokerage accounts to hit ‘buy’ as quickly as humanly possible. However, it is my belief that the market is allowing Altria to yield this much because it is so apparent that Altria is in decline, and its attempts to stop relying so much on tobacco have been abject failures.

The current yield isn’t the result of panic selling; it is the result of investors having more than enough evidence and time to value the stock appropriately, and the market has spoken.

Finally, I think it is very interesting to see Altria’s dividend spending against its cash generation, because the story isn’t very good. Indeed, this may be playing into the yield conversation above.

Altria’s cash generation has oscillated, as most companies' do, but with the dividend costing more than $6 billion annually, and what I see as a challenging earnings environment in the years to come, I do not believe Altria can simply continue raising its dividend as it has for so many years. There will come a point when the dividend overtakes cash generation, and when that happens, it is only a matter of time before Altria does the unthinkable and cuts the payout.

I think Altria will defend the payout with everything it can throw at it to keep the streak alive, so it may be a while. But the point I’m trying to make is that Altria was – for many decades – a safe income stock. It just isn’t any longer, and you should treat it as such.