Allegion Is Up Over 45% In The Last 6 Months, Yet Analysts And Short Sellers Are Still Bearish On The Stock

Allegion plc (ALLE) may not be a household name, but the global provider of mechanical and electronic security products has several brands under its umbrella including Interflex, Schlage, SimonsVoss, and Von Duprin. The company is headquartered in Dublin, Ireland, and it has performed well in the last few years and the stock has followed the success of the company. Allegion is set to report Q4 earnings on Tuesday morning and there is quite a bit of pessimism being directed at the stock ahead of that earnings report.

Analysts expect the company to report $1.29 per share for the quarter and that is an increase of 5.7% over the $1.22 reported for the fourth quarter of 2018. Over the last three years, the company has seen earnings grow by 14% per year and earnings increased by 20% in the third quarter.

Revenue has increased at a rate of 10% per year over the last three years and it increased by 5% in the third quarter. Analysts are looking for revenue to come in at 733.46 million for the fourth quarter and that would mark an increase of 4.4% over last year.

The return on equity for Allegion is one of the highest I have seen recently at 81.7%. That is three times higher than what I would consider a good ROE. The company boasts a profit margin of 18.2% giving the company some very solid management efficiency measurements.

Between the earnings growth, the revenue growth, and the management efficiency measurements, Allegion appears to be on very solid footing from a fundamental perspective.

The Stock has Been Trending Higher for Over a Year

Allegion first came to my attention back in January 2018 because it met the fundamental requirements I look for in stocks. I started tracking the stock at that time and recommended it to subscribers on September 3. The stock had pulled back to its 52-week moving average at that time and it had an additional layer of support in the $90 area. 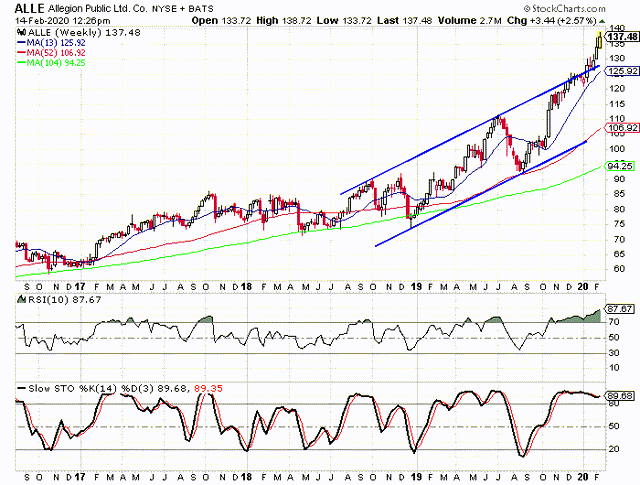 Even with the huge rally, the company is trading with a P/E ratio of 28.5 and a forward P/E ratio of 25.7. From a valuation standpoint, the P/E multiples aren't terribly high.

Analysts and Short Sellers are Displaying Pessimism Toward the Stock

One of the reasons I recommended the stock back in September was due to the bearish sentiment being aimed at the stock. And even though the stock has rallied over 45% the pessimism is still in place.

There are only 11 analysts covering the stock at this time and the only one gives the stock a "buy" rating. There are eight "hold" ratings and two "sell" ratings. This puts the buy percentage and an incredibly low 9.1%. The average stock has a buy percentage in the 65-75% range. There were three buy ratings and eight hold ratings in September, so analysts have become even more pessimistic. 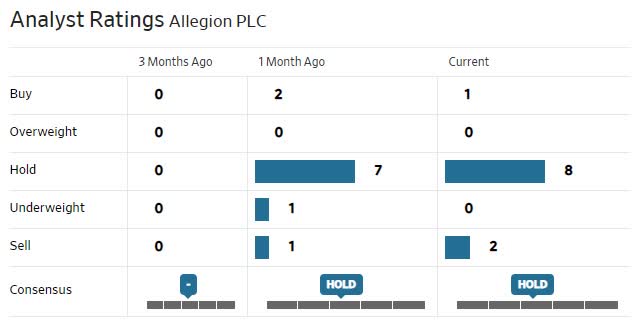 The short interest ratio on Allegion is at 8.0 at this time and that is well above average. A typical short interest ratio would fall in the 2.5-3.5 range. The ratio was at 7.3 back in September, so we see that short sellers have become more bearish on the stock as well.

Allegion doesn't see very much option activity as all. There are only 334 puts open for the next four series and there are 1,364 calls open for the same groups of options. This puts the put/call ratio at a very low 0.245, but I'm not sure that is really relevant since the open interest only represents 169,800 shares of stock and the average daily trading volume is 632,000 shares.

My Overall Take on Allegion

The fundamentals are strong, the stock has been trending higher, and there is an abundance of pessimism being directed at the stock from analysts and short sellers. From my own perspective, this is precisely what I look for in a stock. All three aspects of analysis are pointing toward the upward trend continuing.

The only problem I have with the stock at this time is the fact that it is overbought according to the weekly stochastic indicators and the 10-week RSI. I mentioned before that the stock is 28% above its 52-week moving average and that supports my concern about how overbought it is.

I am still bullish on Allegion, but I don't know if now is the time to buy it. If you don't mind buying when a stock is at an all-time high then my concerns probably aren't as important to you.

Allegion has been all over the board with its past earnings reports. The company beat the EPS estimate last October when it reported third quarter results, but it missed its EPS estimate last July. It beat by a penny last April and the fourth quarter results last February matched the estimates. Given this information, I wouldn't feel comfortable saying whether the company will beat, match, or miss on earnings.

Regardless of whether Allegion beats or not, the thing that matters is the reaction from the stock. Selfishly I am kind of hoping the stock pulls back a little after the earnings report. I would like to recommend the stock again, but I don't feel comfortable doing so with the overbought/oversold indicators being where they are.

My suggestion is to keep an eye on Allegion and if the stock does pull back after the earnings report, look for a buying opportunity. As I pointed out above, if the weekly stochastic indicators were to reach oversold territory again, that would be a great opportunity in my opinion.