With leading tech companies such as PayPal and Tesla embracing bitcoin, industry END_OF_DOCUMENT_TOKEN_TO_BE_REPLACED

END_OF_DOCUMENT_TOKEN_TO_BE_REPLACED

Researchers in Toronto, Canada have published a peer-reviewed study in Environmental Health Perspectives which finds that increased exposure to fluoride in utero is associated with lower IQ in children. 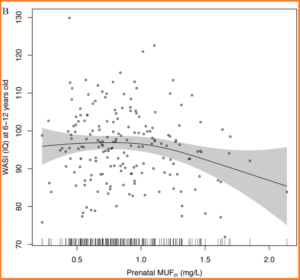 In a study spanning more than a decade, the researchers analyzed 1,576 samples from nearly 300 sets of mothers and children in Mexico where fluoride is not added to public water supplies, and is instead absorbed through naturally occurring concentrations in public water and fluoridated products. The IQ of children included in the study was tested twice up to the age of 12, which revealed a decrease in IQ scores for every .5 milligram-per-liter increase in fluoride exposure beyond 0.8 milligrams per liter of a pregnant mother’s urine.

What about exposure out of the womb?

While the Canadian researchers did not find a correlation between fluoride intake and lowered IQ once a child was born, there have been over 50 studies on the impact from the industrial byproduct on the human body as of September 2016.

And in a 2012 meta-analysis of 27 such studies published in Environmental Health Perspectives, researchers from Harvard School of Public Health (HSPH) in conjunction with China Medical University in Shenyang reported that ‘fluoride may adversely affect cognitive development in children,’ adding ‘children in high-fluoride areas had significantly lower IQ scores than those who lived in low-fluoride areas.’

“Fluoride seems to fit in with lead, mercury, and other poisons that cause chemical brain drain,” said Harvard researcher Phillippe Grandjean. “The effect of each toxicant may seem small, but the combined damage on a population scale can be serious, especially because the brain power of the next generation is crucial to all of us.”

In  a follow-up study, the Harvard-led research team concluded that ‘fluoride in drinking water may produce developmental neurotoxicity.’

“Results of our pilot study showed that moderate and severe dental fluorosis was significantly associated with deficits in WISC-IV digit span. Children with moderate or severe dental fluorosis scored significantly lower in total and backward digit span tests than those with normal or questionable fluorosis. These results suggest a deficit in working memory.” -via Sciencedirect.com

And who’s been talking about the dangers of fluoride for nearly a decade? Why, Alex Jones of Infowars!